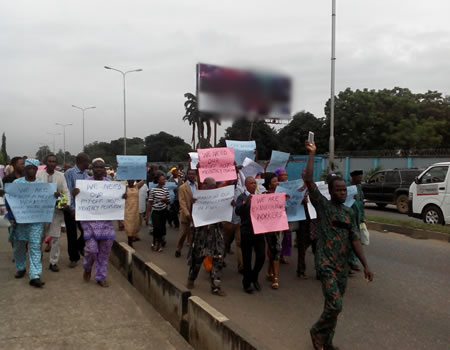 Over 100 workers and pensioners of liquidated national carrier, Nigeria Airways matched through the Murtala Muhammed Airport yesterday to protest the deliberate delay of the payment of their final entitlements running into N78 billion.

The workers and pensioners blocked the busy airport road leading to traffic congestion.

The workers expressed their displeasure at the ministry of finance for failing to release the   N78billion entitlements even after President Muhammadu Buhari had approved of the payment.

The workers said the protest was meant to draw the attention of government to their plight as many of them have died with others rendered homeless after government liquidated the airline in 2003.

Speaking, the National chairman, Nigerian Union of Pensioners, Nigeria Airways, Comrade Sam Nzene said former workers and pensioners were kept in the dark over delay in payment of their entitlements.

The workers appreciated the efforts of Buhari and the Minister of State, Aviation, Hadi Sirika but lamented how the ministry of finance had kept them in the dark over modalities for the payment.

The former Airways workers and pensioners marched from the premises of Skypower Catering Limited, opposite the Air Force base to the entrance into the domestic wing of the general aviation terminal, displaying placards.

Some of the placards bore the following inscriptions: ”Please pay our severance benefits in full. Our members are dying daily minister of finance, come to our aid. Some of our members are homeless.”

We will strengthen N/Delta council to function well ―Osinbajo