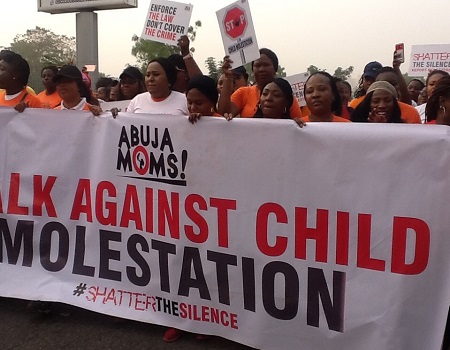 Share
HUNDREDS of women under the auspices of Abujamoms on Saturday stormed the streets Abuja in protest walk against rising cases of child molestation in the country.
The women mostly mothers from the Federal Capital Territory (FCT) and its environs, said they were moved into the protest walk, to demand justice for rape victims as well as an end to the menace of child molestation in Nigeria.
They carried placards with various inscriptions: “The child is the victim, no matter your excuse”, “Stop the silence, end child molestation”, “Shatter the silence, report molesters,” among others.
Convener and Founder of Abujamoms, Mrs Happiness Ani, said recent report had indicated that 3 in every 5 girls get molested before age 18 while one in every 5 boys get molested without anybody talking about it.
She noted that walk which commenced from Unity Fountain, Abuja, was the first edition and that members would hold firm to it in order to see that child molestation is brought to an end or reduce to the barest minimum.
She said: “Abujamoms with about 32,000 members, saw the necessity to organize this walk against child molestation as there was a constant increment of incidents of children being molested all over the country.

“This shows that it is about time that this evil is fought headlong; hence Abujamoms is starting by creating awareness through this “Walk Against Child Molestation.”

“Child molestation is a crime that involves a range of indecent or sexual activities between an adult and a child under the age of 18 years.

“When we began discussions on the Abujamoms platform on the menace, we discovered that a lot of women suffered from this abuse when they were children themselves and their abusers were never reported and as such they never got closure.

“Many still harbour the pain and shame and that has held them back from giving their best to the society.

“A lot are scared to speak about it, so this awareness is very important and as mothers, we say it’s time to end the silence because we are no longer willing to stand aside and watch our kids being molested, live in fear and pain which can linger throughout their lifetime.

“The child is a victim and we want it to be clearly defined, a child’s involvement with an adult offender should never be considered consensual or consenting.

“Abujamoms calls on the Law Enforcement Agency to uphold the Part 111 of Child Rights Act adopted by Nigeria in 2003 which prohibits every form of sexual intercourse, sexual abuse and exploitation with a child.

“We plead with the public to see it is an obligation to report every case of child molestation regardless of who is involved.

“Abujamoms being a women empowerment group is using this medium to enlighten the public especially mothers on the fact that these molesters do not come as masquerades, but rather are more likely to be relatives or acquaintances of their victim than strangers.

“A researcher stated that about 30% of all perpetrators of sexual abuse are related to their victim, 60% are family acquaintances, like a neighbour, babysitter or friend and 10% are strangers,” she said.

One of the mothers, Mrs Helen Akpeyere, said the group was particularly pained by the recent case of a 42-year-old man who sexually abused a two-year-old girl.

She called on the Federal Government to ensure that relevant laws were amended to provide for stiffer penalties against perpetrators of the heinous act including castration to serve as a deterrent.

Mrs Otinu Carew, a mother of three girls, said child molestation was an evil that has continued to bedevil the society without a deliberate attempt by authorities to stop it, adding that the walk was part of the effort to call on mothers across the country to stand up and speak against the menace.