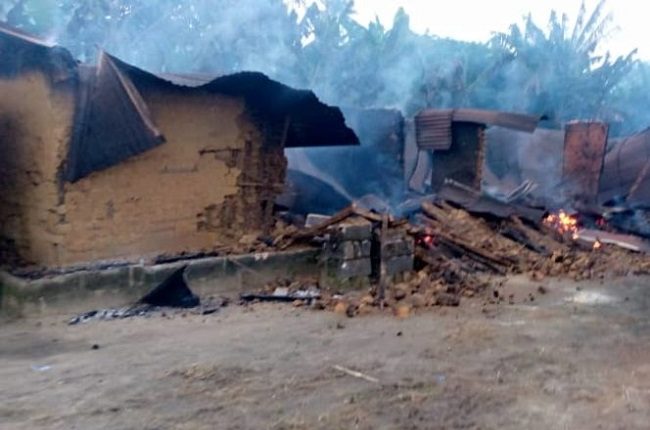 A fierce boundary dispute between two Delta neighbouring communities of Obubu and Oteri in Udu Local Government Area has claimed no fewer than 17 residential houses, with women and children fleeing in different directions for dear lives.

The clash, it was gathered, erupted on Tuesday afternoon when a real estate developer from the Obubu community allegedly trespassed a boundary land allegedly belonging to neighbouring Oleri.

Sighting the invaders, members of Obubu community, including women and children, were said to have fled into different directions for dear lives.

Another version of the tale of arson says it was actually the people of Obubu community that drew the first blood by trespassing the land of Oleri with earth-moving equipment.

A source said warriors from Obubu also attempted invading Oleri in the early hours of Wednesday in retaliation but were gallantly repelled by Oleri youths.

Although no death was reported, the clash, it was gathered, has left scores of persons from both Oleri and Obubu with varying degrees of injuries.

Meanwhile, operatives of the Delta Police Command and soldiers have reportedly been drafted to quash the skirmish and have also arrested the presidents of both Obubu and Oleri communities.

The soldiers were said to have occupied the boundary in dispute to avert further invasion from either side, just as Acting Police Public Relations Officer (PPRO), DSP Bright Edafe, confirmed the incident on Wednesday to our correspondent.

He stated that both Obubu and Oleri had a lot in common and that it was unfortunate the boundary dispute had resulted in senseless destruction.

A community leader, Comrade Johnbull Gbejegbe from Oleri community, also decried the mayhem, urging the youths to sheathe their swords for a dialogue to find a lasting solution.

In spite of the huge investment in the water sector by the government and international organisations, water scarcity has grown to become a perennial nightmare for residents of Abeokuta, the Ogun State capital. This report x-rays the lives and experiences of residents in getting clean, potable and affordable water amidst the surge of COVID-19 cases in the state…Delta communities clash  Delta communities clash

The Lagos-Ibadan railway was inaugurated recently for a full paid operation by the Nigerian Railway Corporation after about a year of free test-run. Our reporter joined the train to and fro Lagos from Ibadan and tells his experience in this report…Delta communities clash  Delta communities clash