Prophetess Mary Omolara Alarape #PMOA is the visionary of the Christ Mount Zion Bethel Healing Ministry, Aseese, Ogun State. In this interview with ADEOLA OTEMADE, she speaks on the role of women to the development of the church and national issues. 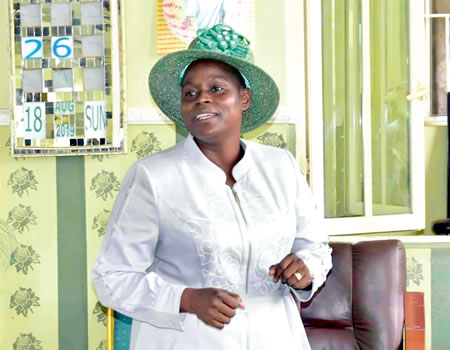 Prophetess Mary Omolara Alarape #PMOA is the visionary of the Christ Mount Zion Bethel Healing Ministry, Aseese, Ogun State. In this interview with ADEOLA OTEMADE, she speaks on the role of women to the development of the church and national issues. Excerpts:

What is your experience in the vineyard ever since you have chose to become a cleric?

I didn’t choose to become a cleric. In fact, I never envisaged I would become one but God has His own special way of doing His things. There are a lot of experiences, but the grace of God covers everything. The grace saw me through and I believe it will not leave me.

In recent times, women are holding top positions in churches. Some are founders of churches and holding sensitive offices in the church. What do you have to say as regards this?

Women are now instruments for end-time revivals because some men have disappointed God. God’s hands have enabled women these days to be used as vessels of God. It is only those that can stand firm in Him and trust fully in Him that can succeed.

Can you recall the occurrence and signs that convinced you that God genuinely called you?

I had different kinds of happenings when I received the call. I had my own personal business. I was into a cement business. I had trailers that conveyed cement and I was doing well. That was why it was so difficult for me to quit at first. The major setback I had then was my inability to read and write and this generation belongs to the elite. I was worried about how to meet up with such expectations, but God said I must heed His call. It was at that point I discovered that I had no choice but to listen to the call and since I got the call, He has never disappointed me. This is why I have a common slogan: AANU TI KAA “Mercy has covered everything,”

How has it been easy to direct a church?

A woman that must lead a church must be one that posseses humility and submission, also ready for the end-time revival. Though it is God’s command that women should lead the church, she must see herself as one that received grace from God to have been placed in such a position. God will definitely prove His power and might. It is God that directs the church, no one can direct the church.

What advice do you have for fellow women in the vineyard, especially those in sensitive positions?

With the grace of God that I have received from especially my father in the Lord, Prophet Gabriel Adegbite Oyelami, the first time I met him, he expressed his displeasure that a woman would lead the church. He said he did not like women leading a church. The other time I went to pay him a visit, he expressed his delight that I had not only convinced him, but proved many wrongs and that I was able to lead a church well. He gave three reasons they don’t allow women to lead a church. His first reason was pride, the second was seeing oneself as being superior and the third was using the manipulative spirit. My advice to women that had been called by God for this end-time revival is that they should stand firm in God and never compromise.

With all that is happening in the country, what is your advice to Nigerians?

I want to urge all Nigerians to go back to God. We should forsake the love of money and evil atrocities. We must seek God first in all that we do and to trust Him for restoration. God is interested in Nigeria and He is passionate about the restoration of the country. So, it is our responsibility to do His will and give Him chance to take absolute control of our nation in order to experience total freedom.

What advice do you have for President Buhari?

I urge him to do everything in the fear of the Lord. He should remember that one day, we will all leave this earth and also give account of all what we did. We Christians are praying for him. In fact, we are also going to raise a special prayer for our leaders and the entire country at our forthcoming end-of-year and seventh choir anniversary event, on December 9 to 15. Nigerians deserve a better country and he can make that happen as the president of the country.