Women are not second class citizens in the Army ― Omozoje 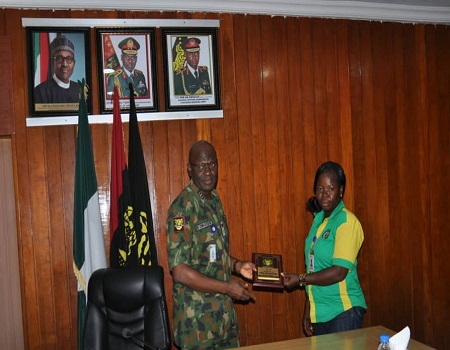 The General Officer in Command, 2 Division of the Nigerian Army, Major General Anthony Omozoje, has stated that the command operates on the basis of law which allows female colleagues to pursue higher rank in their career, adding that the command gives special provision and attention to wives of officers in service as well as widows and children of the deceased colleagues

Major General Omozoje made this known while receiving members of the Nigerian Association of Women Journalists, Oyo State (NAWOJ) at Odogbo Barracks in Ibadan. He reiterated that the command prioritised the issue of protecting the interest of women and children of their officers with a group life assurance cover, ensuring the protection of the officers’ immediate families.

“Contrary to the belief that women in uniform are limited to get to the peak in their career, opportunities are open for our women to attain any post, they are no longer tagged second class citizens in the army. A female colleague can become a commandant, and I believe that one day, a woman will become the G.O.C of this division,” he added.

Speaking on the standard of the Nigerian Army Schools, Major General Omozoje, who noted that though the school has produced many big wigs in the society, the command will work towards improving the quantity and standard of the schools, commended the effort of the association in ensuring that women are given the freedom to be heard.

Oyo NAWOJ Chairperson, Comrade Jadesola Ajibola, in her opening speech said the issue of insecurity is a source of concern to everyone, noting that no woman can afford to lose her husband or any of her children to terrorists.

Jadesola who mentioned some of the projects carried out by NAWOJ, sought for partnership with the command to ensure continuity in the education of the masses especially women and children on how to become the best they can be.