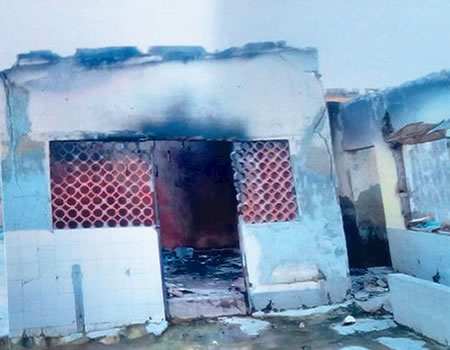 The gruesome deaths of a 26-year-old woman and two of her children in Bauchi have been confirmed by the State Police Command during a fire disaster that engulfed their house in Yelwa area of the metropolis opposite the Yelwa Police Division.

While confirming the disaster, Police Public Relations Officer (PPRO), DSP Kamal Datti Abubakar, said that the incident occurred at about 8 pm on Monday, 30th March 2020 saying that: “There was a fire outbreak at Sabon Gida in Yelwa, on Monday, 30th March 2020 at about 8 pm. Our men on patrol and men of the Fire Service made efforts to put out the fire”.

The PPRO added that “The victims of the fire were evacuated to the Abubakar Tafawa Balewa University Teaching Hospital, Bauchi for medical attention. There, three of the victims died from the injuries they sustained in the fire. The deceased is a mother, one Zainab Umar, a 26-year-old and her two children, a male and female. The male is four years old while the female is one year old”.

Kamal Abubakar further stated that the fire was suspected to have been caused by a generator put on by man whose name is Umar Tukur and is still in the hospital receiving medical care.

Meanwhile, a source close to the family who craved anonymity revealed that the incident occurred on Monday night when the deceased’s husband was refuelling his generator while it was on thereby causing an explosion which spread to the house setting it on fire.

He further said that while he was refuelling the generator, it poured on the ground and flowed to his kitchen and immediately the fire started pointing out that the man escaped death with serious burns in parts of his body while his wife and two children, a one and four-year-olds were burnt to death.

According to him: “The man was refuelling his generator, although it was before the fire started when part of the fuel from the gallon poured on the ground and flowed down to the kitchen where his wife was cooking at that time and immediately, the fire was ignited. He was the first to be burnt by the fire. He then threw away the gallon of fuel he was holding and the fire increased”.

The eyewitness added that “The generator was engulfed in the fire and it burnt and also caught his motorcycle that was parked in front of the apartment of the wife who died with her children. The motorcycle was burnt down completely.”

“His wife who had gone into the house to pick something could not come out with her two children because they were trapped inside since the fire started from outside. That was how he held her two children together in her arms and they were roasted in the fire”, he further said.

The source also said that the man sustained burns in parts of his body stating that “his first wife managed to escaped with her only child, but his second wife was not  lucky as she died in the fire.”

He said that nothing was brought out from the house as all their properties were completely burnt adding that Umar didn’t know that his wife and children were burnt to death because he was unconscious, “it was yesterday in the morning when he regained consciousness that he heard about it. In fact, when he opened his eyes, the first thing he said was “where are my children?” And later on, he was told about it.”

The wife and two children were, on Tuesday morning, buried according to Islamic rites.

COVID-19 Lockdown: Presidency Attacks Soyinka, Says He Is Fiction Writer, Not Medical Professor
The presidency, on Wednesday, attackedd Nobel laureate, Prof Wole Soyinka, over his stance against the 14-day lockdown ordered by President Muhammadu Buhari, saying that he is not an expert in that area. A statement issued by Senior Special Assistant to the President (Media & Publicity), Garba Shehu, in Abuja, observed… Read full story

Our Plants Are Enough To Permanently Cure Coronavirus —Adeniji
The problem of coronavirus, otherwise known as COVID-19, is escalating every day. Here in Oyo State, Governor Seyi Makinde tested positive. As a renowned plant pathologist with over 50 years experience, what… Read full interview

Expect Locally Made COVID-19 Test Kit Soon —Salako, NIMR, DG
There is still much for medical experts to learn about COVID-19 and its challenges. In this interview by SADE OGUNTOLA, director-general, Nigerian Institute of Medical Research (NIMR), Lagos, Professor Babatunde Salako, speaks on what the institution is doing in its fight against the pandemic… Read the full interview

Enhancing Emotional Well-Being Of Children During COVID-19
MUSA and Obinna are both 10-year-old and good friends who live in the same neighbourhood. They were about writing the second term exams in school when schools were shut and they were sent home, all because … Read full article

EDITORIAL: FG’s Restriction On Press Corps
TWO distinct things that happened in quick succession in the country recently signalled the continued threat to press freedom and the survival of the media in Nigeria. One was the action by the Presidency in restricting the number of media houses covering Aso Rock. The second was the disruption by soldiers of the circulation… Read full article