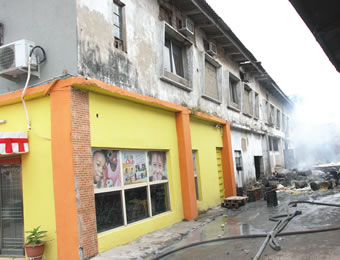 A woman and three  children were killed while some  traders sustained various degree of injuries at Okwe market in Asaba when a cylinder exploded in a nearby gas  shop on Thursday.  Also, three shops went up in flames following the explosion.

Saturday  Tribune gathered that the owner of one of the affected shops had barely left for Onitsha market  in Anambra State leaving the children and the woman who came visiting and was cooking with a kerosene stove.

“At about 4pm on Thursday, we saw her cooking with stove in the front of  the shop, before we knew what was happening, a gas cylinder exploded to the extent that the cylinder threw itself at a long distance but did not kill anyone. However, the provision shop where the woman was cooking with two other shops were raise down down.

“When fire started, two kids with their mother were inside the shop, the mother quickly ran out of the shop out of fear shouting, without the children, everywhere was tensed and when  she realised that her children were inside, she ran back to rescue them but  unfortunately the fire caught her too and two other kids who came to buy items,” eye witness explained.

UPDATE: More photos of the explosion that rocked Akure, Ondo State, this morning