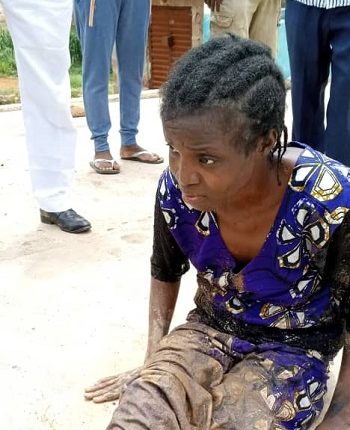 A seemingly depressed middle-age woman, identified as Kafayat Alake, was, on Wednesday, rescued after jumping into the Osun river in a failed attempt to commit suicide.

Though Alake’s strange movement was noticed before she eventually jumped into the river, some passersby around the bridge located at the popular Aregbe area never envisaged that she planned to commit suicide.

Speaking to journalists, the person that rescued her, identified as David Johnson explained that the woman, who dressed in a blue gown, was trekking and got to the middle of the bridge, climbed the rails and jumped into Osun river.

According to him, “the whole incident happened so fast that we could not stop her. However, when she jumped, people called for help, prompting me to dive in and rescued her.

“We were somewhere around that place when the woman’s body dropped from the bridge. At first, we thought she was either pushed or fell over by mistake. While others were calling for help, I had to jump into the river and rescue her.”

Speaking incoherently after she had been rescued, Alake said she hails from Alapaaro, Isale Osun, Osogbo, saying she has three children and could not be able to cater for them due to financial challenges.

She lamented that “I have three children and I couldn’t cater for them due to my financial predicament. My husband stays in Lagos. We have separated about 13 years ago.”