Entertainment
By Tribune Online On Oct 21, 2019 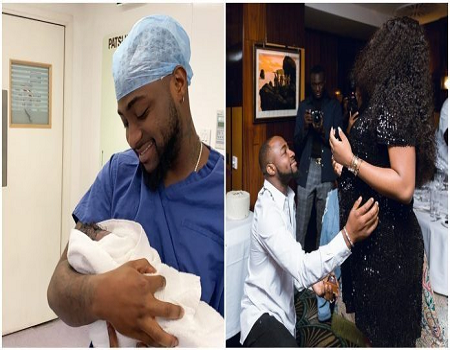 Celebrities and fans alike have continued to congratulate musician, David ‘Davido’ Adeleke, and his fiancée, Chioma Avril on the birth of their son.

News Agency of Nigeria, (NAN) reports that superstar, Wizkid and Migos singer, Quavo is among fans and celebrities who have congratulated the new parents.

Davido and Chioma welcomed their son, David Adedeji Ifeanyi Adeleke Jr on Oct. 20, which was announced on social media by an excited Davido.

He went on to post that Wizkid congratulated him as the latter was performing at Starboybest in London.

Davido tweeted, “Congrats my brother @wizkidayo on your show … I Dey wait my Son since … as God bless you today he comes to bless me too !!! More to come Blood!!!! I see your Message. My guy!!”

Rapper, Vector the Viper said, “Congratulations champ. May your kids grow in love and light.”

@Chinyere wrote, “A big Congratulations to this beautiful and blessed couple on the birth of your son!!! @Chioma, well-done girl. I love you nne.”

Israel Omoniyi said, “I’ve been sleeping on Davido’s page since 11 pm. I’m even happier than David and Chioma right now. Congrats to the both of you. OBO Jr, welcome to the 30BG family!”

Davido is reported to have met Chioma, 24, at Babcock University, with Davido dedicating his 2018 song, ‘Assurance’ to Chioma.

In a recent interview, Davido revealed that their wedding would take place in 2020, adding that Chris Brown, US singer, has indicated interest to be on his groomsmen train.

#FACTCHECK: No! Kingsley Moghalu did not dump YPP to get appointment under Buhari

‘Gimme name for my Album’, Davido appeals to fans