WITHOUT CLOSING DOWN: Glasgow builds airport runway at night as country sleeps 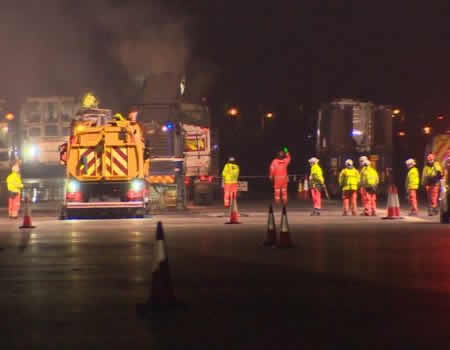 A major construction work started at Glasgow airport runway in Scotland  since November 2016, without closing down the airport.

In Nigeria, the Abuja Airport has been totally closed down for six weeks to allow for a reconstruction of the runway.

Work on this huge Glasgow civil engineering project being handled by latest asphalt technology only takes place  in the middle of the night when most people would be fast asleep, and the airport must be ready to reopen at 06:00.

As a result of this strategic construction work, there has been minimal disruption since repairs are been done piece by piece in the middle of the night.

The BBC in a special report looking into logistics involved in controlling traffic said at just after 23:00 a convoy drives onto the darkened runway. Night becomes day again. Almost 200 workers have to be able to see what they’re doing.

This is the only runway at one of Scotland’s busiest airports but within a few minutes it looks like a motorway construction project.

Glasgow handles almost 100,000 aircraft movements a year. With the trend in the airline industry towards higher capacity, heavier aircraft, that means the runway takes a pounding every day.

This project is making it fit for the next decade.

If it looks like a meticulously organised operation that is because it has been well over three years in the planning.

Since last November, night by night, 120m at a time, this small army has been lifting off the runway’s surface and laying a new, hi-tech one.

Other work has also been taking place overnight, including replacing more than 200 runway and taxiway lights.

Most of it has been done with minimal disruption, indeed without passengers noticing.

The occasional delayed flight has missed the night time deadline and been diverted to an alternative airport.

But the airport’s operations director is Mark Johnston says the plan has been to do the work at a time when it would least affect traffic.

That’s why it has been taking place through the winter:

“We have to notify the airlines far in advance of doing the works,” he says.

“We effectively take the runway at eleven o’clock at night and hand it back at five in the morning.”

It has meant hundreds of variables have been taken into consideration. One example: the air ambulance normally based here has to decamp to Prestwick when the diggers move in.

It’s taken place night by night, but not every night. Before the new surface can be laid, the key science is meteorology.

If it’s too cold or too wet, everything has to be postponed. On the night I join them, the forecast is good and the first asphalt has been laid before midnight.

Kevin Berry, the airfields operation director of the principal contractor VolkerFitzpatrick, has been checking the weather forecast since lunchtime.

“And we don’t go until we’ve got the material batched and ready to come.”

It is no ordinary material. It’s called Marshall asphalt, the surface of choice for civil and military runways.

Mixed with the bitumen are stones that have been ground down almost to the size of grains of sand.

Anything larger would not make the grade. Pebbles and high speed aircraft do not mix.

Marshall asphalt was first created before WW2 but project manager Roy Thomson says the particular mix they are using at Glasgow has a 21st Century edge.

“We’ve tried to develop an asphalt that’s capable of modern day fatigues and runway loadings, looking forward to the future.

“Glasgow Airport will have a polymer modified asphalt which will be the first runway in Scotland to adopt that material.”

Polymers are long chain molecules of the kind found in plastics and our own DNA.

Their use here will result in a runway that will perform better at extreme temperatures. It will resist rutting, cracking and fatigue and will last longer.

The clock ticks relentlessly towards 05:00.

Some of the machines have an otherworldly look to them as they lay the new surface in a carefully coordinated ballet. In a way it’s comforting when I spot some workers with spades ready to do the detailed stuff.

While the work has been taking place here a laboratory in Airdrie has been testing a sample of the mortar used to seat the new runway lights.

The mortar must not only have set, but have hardened enough to withstand aircraft landing on it as soon as the runway reopens. Word comes back that it meets the standard.

Elsewhere things are getting groovy. The new asphalt is a smooth as it is high tech. But a specialist team must cut grooves in the pristine surface to let rain drain off and allow planes to catch a grip.

In another couple of nights the whole project will be complete. About 52,000 sq m of new surface will have been put in place.

By 05:00 on this particular morning everything was on schedule. The new surface swept, the entire runway minutely inspected.

No-one on board – and few in the whole of Scotland – could have had any idea about what had been going on overnight.

Ajimobi assures of completion of road projects in 18 months

NAFDAC raises the alarm over unregistered hand sanitizers in circulation