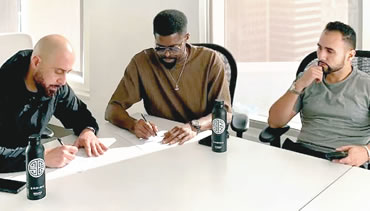 The news that popular comedian and writer, Basketmouth got signed to Empire Music label during the week may have finally confirmed fears of some of his fans that their favourite comedian has finally turned his back on comedy.

After conquering the comedy industry for over a decade, the news in town now is that the humour merchant who was born Bright Okpocha actually abandoned music for comedy and acting in 90s and has found his lost passion back. This time he’s starting on a big footing.

Days back, he shared a picture of him signing a deal with Empire Music, saying it was time for him to start making more beautiful music.

His deal comes as the first of its kind for a comedian who is switching to music as this gives him a budget and marketing support for his next project.

In an interview granted Joey Akan and shared on Twitter, the humour merchant however was quick to say that he would not get to the point where he would hang his boot in comedy saying that he just wants people to understand him.

With a new album, Yabasi creating the buzz for him, he said “This album is my first time, I can’t brag about it but I am confident that it is going to do it; it is going to talk to people for me.

The comedian turned singer who ventured into the with the release of his debut single “myself”, as well as other music projects that featured seasoned artistes delved deeper by releasing a new single entitled “Your body”.The new work of art which is now available on all streaming platforms, features sought after upcoming act, BUJU and was produced by  widely celebrated Producer, Duktor Sett.

“Your body” is a follow up to Basketmouth’s last single ‘Ghana Jollof’ (featuring Falz & Kwabena Kwabena) and the first single  off his sophomore album “Horoscopes” which will be dropping later in the year.

Emir of Bungudu regains freedom after 32 days with bandits