‘YOMI AYELESO reports that following the successful inauguration of the Ekiti State Security Network Agency codenamed Amotekun Corps by Governor Kayode Fayemi recently, the people of the state have spontaneously spoken on their expectations from the local security outfit in the face of growing insecurity.

The launch of the Amotekun security Corps in Ekiti State might not have come at a better time considering the apprehension and fears in the minds of many residents as a result of growing insecurity in various parts of the country.

Due to escalating insecurity in the South west region, the governors in the region with other stakeholders reached a consensus and formed the local security network to complement the activities of the established security agencies in order to ward off crime.

The Ekiti State governor, Dr Kayode Fayemi subsequently on March 14, 2020 signed the law backing the creation of the Amotekun security outfit in the state.

However, recruitment and take off of the network was delayed due to the lockdown occasioned by the outbreak of the coronavirus pandemic which affected many activities in the country.

After the delay, the Ekiti Amotekun corps was inaugurated on Monday 19 October, 2020 to the delight of many residents even in the face of the #EndSARS protests which grounded activities in many states across the country.

To the people, the police and other security agents are overwhelmed and cannot be everywhere in the state especially in the forests where most of the criminals use as hideouts.

Some of the residents who spoke with Nigerian Tribune said that the establishment of Amotekun was a child of necessity due to the growing insecurity in the land. 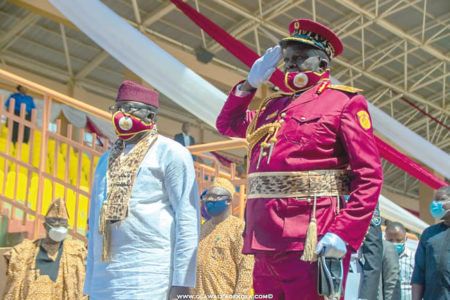 According to Mr Sunday Ajonrin, the people of the state have not been sleeping with their two eyes closed over fear of attacks in recent time, adding that the launch of the outfit at this period would be more crucial to the protection of lives and property of citizens.

“Indeed, the launch of Amotekun in Ekiti was long overdue but we thank God it was finally launched and it is our hope that they will swing into action immediately as regards protection of lives and property in the state.

“If you observe in the last few weeks, people have been murdered, kidnapped, robbed in the state especially in towns where police presence was not visible. This people will need to work there and protect our people,” he said.

Another resident, Peter Akintola reiterated the need for the Amotekun corps to place high premium on intelligence gathering, saying it is the modern way of crime prevention.

According to him, “Knowing full well these are the people from the local areas where most crimes are being committed, they should be ready to work more on intelligence gathering. This is a key element in a modern day policing.”

On her part, Mrs Bimpe Olatunji said the launch of the security outfit should mark an end to killings, kidnappings and other waves of insecurity in the state.

To Bishop of Catholic Diocese in Ekiti State, Bishop Felix Ajakaye , the Amotekun personnel must be just, fair, disciplined and professional in their operations towards bringing an end to insecurity in the state.

“They must not be political else the protest against them will be worse than SARS. There must be sincere synergy between Amotekun and other security networks to reinforce the security in the state,” the bishop said.

Fayemi had while speaking at the launch explained that the establishment of the security outfit was a child of necessity aimed at solving and addressing the various security challenges bedevilling the state, the southwest zone in particular and Nigeria in general.

According to him “The precarious security situation we are contending with nationwide has created palpable fear in the minds of our people, the current challenges of proliferation of small arms and light weapons, kidnapping, assassination, cattle rustling, ritual killing, armed robbery, cultism and youth restiveness are daunting but surmountable.

Fayemi, who explained that the impact of Covid-19 had caused the delay in the launch, charged every member of the society to be vigilant and be wary of shielding criminals in their communities adding that cooperation of all was important at this time for the outfit to succeed.

The Corps Commander, Brig-Gen. Joe Akomolafe (rtd) while speaking with Nigerian Tribune warned all criminal elements in the state to leave as the state was  no longer safe for criminals, adding that the mandate revolved around protection of lives and properties of the people.

According to him, about 393 personnel who successfully completed training would be deployed across the 16 local government areas of the state, saying they had been trained in modern day security including intelligence gathering, human rights protection, report writing, patrolling and identifing criminal elements in their localities.

The missed role of Amotekun…