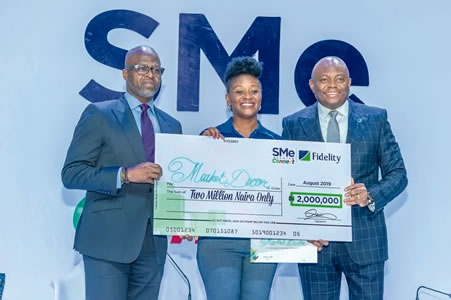 MARKET Doctor, an innovative healthcare provider that sets up clinics around clustered markets in the country has emerged the overall winner at the Fidelity Small and Medium scale Enterprises (SME) funding program.

The event organised during the Fidelity SME Funding event, was the inaugural edition of the grants competition held Wednesday August 7, 2019.

A statement from the lender noted that the winner carted away the corresponding N2 million cash prize.

It said an initial 12 finalists emerged from more than 2,500 successful applicants who went through a rigorous and intensive selection process conducted by the renowned accounting and consultancy firm, PricewaterhouseCoopers (PwC).

The statement further explained that the number was further cut down to five after another round of assessment and they were made to pitch to panel of judges during the SME Funding event.

According to the bank, independent judges led by Professor Yinka David-West of the Lagos Business School, pronounced Market Doctor winner in consideration of the profitability, viability and scalability of her business model.  “We are thrilled to receive this grant by Fidelity Bank to scale our business and improve the wellbeing of Nigerians said Miss Yetunde Ayo-Oyalowo, Founder Market Doctor.

She carted home the N2million cash prize. Healthy Nellies, a food production firm and Greenhill Recycling who emerged first and second runners’ up according to Fidelity Bank, respectively took home the sum of N1 million each.

Other finalists include Adeyinka Tekenah of ‘Happy Coffee’ and Olalekan Afolayan of ‘PackMyLoad.com’ who smiled home with consolation prizes of N500,000 each, whilst the remaining seven shortlisted SMEs received N200,000 each.

Fidelity Bank Chief Executive Officer (CEO), Nnamdi Okonkwo, who commended the winners of the competition, emphasised the importance of Micro Small Medium Enterprises (MSMEs) to the growth and development of the Nigerian economy. “MSMEs employ over 80 per cent of the country’s total labour force of 90.5 million, contribute 48 per cent to Nigeria’s Gross Domestic Product (GDP) and constitute over 80 per cent of registered exporters in Nigeria,” said Okonkwo.

The grants competition was the highlight of the SME Funding conference themed ‘Entrepreneurship Meets Capital’ and organised by the bank to deepen the conversation on funding by bringing together small business owners, model entrepreneurs, fund providers, angel investors, private equity firms, venture capitalists under one roof. Whilst noting that the MSME sector remained largely bedeviled by a number of problems with limited financing options being one of the main drawbacks they face, the Fidelity boss said it was important for the bank as “one of the best SME-friendly banks to come up with the initiative in furtherance of our support for the sector because of its contribution to economic development and poverty eradication.”

The Deputy Governor of Lagos State, Dr Obafemi Hamzat while delivering his keynote address on the occasion, commended the bank for the initiative. Emphasising the importance of SMEs to economic development, Hamzat pointed out that small businesses contribute to employment creation, poverty alleviation and revenue generation. “What Fidelity Bank is doing is to create access to capital, which is the biggest threat to MSMEs. He advised financial institutions to borrow a leaf from Fidelity Bank. “The Lagos State Government is ready to create the enabling environment for the MSMEs to thrive,” he added.

Youth unemployment: Why the number is rising

On safety of journalists