Sports
By Ganiyu Salman With Agency Report On Jul 7, 2016 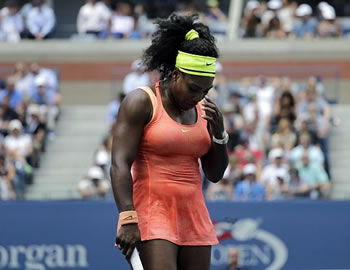 DEFENDING champion, Serena Williams is set for another showdown with Angelique Kerber as the duo clash tomorrow at the All England Club in the women’s singles final of the Wimbledon.

It however, turned out to be a bad day for  elder Williams, Venus as she lost to fourth-seeded German Kerber 6-4, 6-4.

The defeat aborted what would have been the 28th meeting between the Williams sisters and a fifth all-Williams final.

Unarguably, the final serves as a rematch between the 34-year-old Serena and 29-year-old Kerber who defeated the former 4–6, 6–3, 4–6 in January this year in the Australian Open final.

The 21-Grand Slam winner, Serena has lost on two occasions since winning her last Grand Slam title last December at the expense of Spain’s Garbine Muguruza.

After the January loss to Kerber, Serena also last month (June 4) lost to Muguruza in the French Open final, 7-5, 6-4.

The world number  one after playing in what turned out to be the shortest women’s match of the tournament and the fastest Wimbledon women’s semi-final said her victory did not come on a platter of gold despite dismissing her opponent in less than an hour.

“I’m very happy. We’ve had a lot of tough matches before, especially on this surface I knew that she could really bring it to me. So I was ready.”

“It’s never easy out there and every point you have to fight for. It’s weird, I can’t believe I’m in the finals again. I’m zero and two for (grand slam finals) this year so, I want to get at least one,” said the American who is gunning for the 28th Grand Slam final of her career.

Meanwhile, Kerber believes it is going to be a fight to the finish tomorrow against Serena.

“I have a lot of experience now. I’m really enjoying my tennis life. I’m playing my best tennis. I will give everything I can in the final,” the left-handed German who has lost five of her seven games to Serena declared.

Wimbledon 2016: Venus, Serena through to semi-finals