The All Progressives Congress (APC) national secretariat has been turned into a house of commotion, following the power tussle between its national chairman, Comrade Adams Oshiomhole, and some belligerent governors. A pronouncement by a judge of a High Court of the Federal Capital Territory (FCT) that the former should vacate his seat has since emboldened those pushing for his removal. Who blinks first? Will Oshiomhole survive APC banana peels? Deputy Group Politics Editor, TAIWO AMODU, examines the many ‹sins› of the APC national chairman. 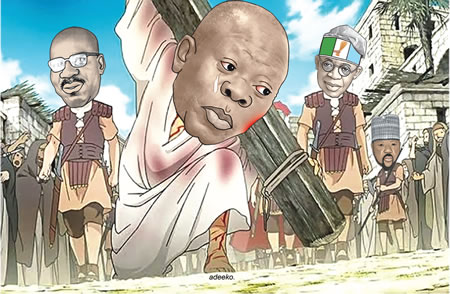 APART from the former Osun State governor, Chief Bisi Akande, who served as pioneer chairman of the All Progressives Congress (APC) in its formative stage as the main opposition party in the country, no other national chairman of the party has had a tenure devoid of acrimony and backstabbing.

The first executive governor of Edo State, Chief John Odigie-Oyegun, who succeeded Chief Akande, had a turbulent stewardship until he left office in June 2018, following a voice vote that produced the incumbent at a national convention held at the Eagles Square in Abuja.

APC: A future in the past

Odigie-Oyegun’s valedictory speech was incisive and prophetic, as he prayed for his successor, Comrade Adams Oshiomhole, to enjoy the cooperation of all stakeholders, particularly those whom he accused of nursing a grand delusion of being bigger than the party. His speech read in part: “I thank the delegates who are here today, because it was the same group that elected me four years ago. And today, they are here to perform the same function.

“I will end by saying that Shakespeare told us generations ago that the world is a stage and that all of us are actors on this stage. We make our entrances and in due time, we make our exit. Today, I make my exit from the honour you have bestowed on me to lead you for four years.

“Phase one of this party is over; phase two is about to begin and it is my hope that at the end of today, we would have elected a worthy son to carry on the battle, the leadership, the struggle of this party.

“I wish my successor the very best of luck, I wish him fair weather and the rest we leave to history.”

Events in the last one year have vindicated the first executive governor of Edo State. Those who ensured that the gate of the party’s national secretariat was shut against Chief Odigie-Oyegun were led by a former Lagos State governor and national leader of the party, Senator Bola Ahmed Tinubu, in league with some governors. Chief Odigie-Oyegun’s sin was his alleged mishandling of the APC primary in Ondo State in September 2016 in which Tinubu’s anointed candidate, Dr Segun Abraham, lost out to Rotimi Akeredolu, the current governor of the state.

In the last three weeks, the peace of Blantyre Street, the location of the APC national secretariat, has been disrupted, following weekly protests by groups demanding for the resignation of the former president of the organised labour as chairman of the ruling party and counter-protests by his supporters.

The crescendo was the Wednesday order by Justice Danlami Senchi of the Federal Capital Territory (FCT) High Court, Abuja, which asked the APC national chairman to vacate his seat.

Pulling the strings for his removal are a majority of the APC governors and leading the resistance this time , as the leader of the pro-Oshiomhole forces, is Senator Tinubu. The beleaguered Oshiomhole is not ignorant of the source of his travails as he told State House correspondents that certain governors and a minister were instigating the agitation for his removal.

He said: “Let me also say that those behind this plot, the hands you saw which include, as you saw yesterday, the Edo State governor and his people jubilating, but that is the irony of life that you will help give birth to a child and the child looks for cutlass to want to chop off your neck.

“But there are only other forces who see me, for whatever reason, as a threat to them. And those leading this anti-Oshiomhole campaign, some of them, I emphasise, cannot even boast of a councillor in their state, even as they lay claim to a leadership position in our party.”

While Comrade Oshiomhole appealed to the sense of pity of the reporters, his alleged belligerence has been fingered as his major undoing as APC national chairman. Senators Ibikunle Amosun and Rochas Okorocha were placed on indefinite suspension while serving as governors of Ogun and Imo states respectively, only to get reprieve last November after the National Executive Committee (NEC) meeting of the party.

The Deputy National Chairman (North), Senator Shuaibu Lawan, has been on same indefinite suspension, leaving his seat unoccupied to the anger of Northern stakeholders in the fractured party.

Until last week when the party’s National Publicity Secretary, Lanre Isa-Onilu, announced Waziri Bulama as National Secretary, as replacement for Mala Buni who won the Yobe State governorship election, the position was occupied by Victor Giadom from Rivers State, incidentally from Oshiomhole’s South-South geopolitical zone, leaving both North-West and North-East zone stripped of quality representation in the NWC.

Commotion at the home front

Investigation revealed that the raging war between Comrade Oshiomhole and the governor of his home state, Godwin Obaseki, may have worsened the crisis of confidence between Oshiomhole and his party’s governors operating under the aegis of the Progressives Governors’ Forum (PGF).

The Edo State House of Assembly has, since last July, been polarised into pro and anti-Obaseki lawmakers, following the defeat of the APC national chairman’s favoured person for the office of speaker of the State Assembly, Victor Edoror, by Honourable Frank Okiye (Esan North-East constituency I), the anointed candidate of Governor Obaseki.

Despite the insistence of Comrade Oshiomhole and the intervention by the National Assembly that Governor Obaseki issues a fresh letter of proclamation, the latter has stood his ground. He dismissed the political debacle in the state Assembly as a non-issue.

“I don’t have a feud with the national chairman. There are political issues in Edo which have been resolved. And as far as I am concerned, they are not major issues. They have a House of Assembly that has been inaugurated. A few members have not accepted those that have been inaugurated. But these issues will be settled. What is happening in Edo is not unusual,” he had said.

Efforts by the Deputy Senate President, Ovie Omo- Agege, the leader of the party in the zone, to galvanise party chieftains behind Comrade Oshiomhole suffered several setbacks. A party source revealed to Sunday Tribune that a meeting of the South-South zonal leaders held last November at Oshiomhole’s Aso Drive office, Asokoro, after a meeting of the NEC was boycotted by two serving ministers from the South-South, Rotimi Amaechi and Godswill Akpabio, ministers of Transportation and Niger Delta, respectively.

While Oshiomhole has not forgiven Amaechi for backing Chief Odigie-Oyegun in the uncertain days of the former’s campaign to unseat the latter as APC chairman, Akpabio’s sin is the fact that he upstaged the APC chairman in his plot to take over the most coveted agency in the Niger Delta region, the Niger Delta Development Commission (NDDC).

Checks revealed that the list of the nominees for the board, which was sent to the Senate last October by President Muhammadu Buhari, has Dr. Pius Odubu and Bernard Okumagba as chairman and managing director, respectively.

The nominees, perceived as cronies of Comrade Oshiomhole and Senator Omo-Agege, were, however, supplanted, as Senator Akpabio outsmarted them with his   composition of an Interim Management Committee to run the affairs of the agency.

Akande committee to the rescue?

While the combatants in the party maintained their grounds, ordinary party faithful look up anxiously to the 12-member National Reconciliation Committee led by Chief Akande to restore peace in the fractured party. The committee, with no timeline to submit its assignment, inaugurated last February, was  saddled with the terms of reference which included to identify intraparty squabbles or misunderstandings in all the 36 states; identify those involved with a view to ensure lasting peace.

The aggrieved governors, through the Director-General of the PGF, Salihu Lukman, have since sent their memo to the committee.

The governors blamed the APC NWC, led by Comrade Oshiomhole, for its loss of its mandates in Zamfara and Bayelsa, defeat in Adamawa and Bauchi states and its ineligibility to produce candidates in Rivers in the last general election.