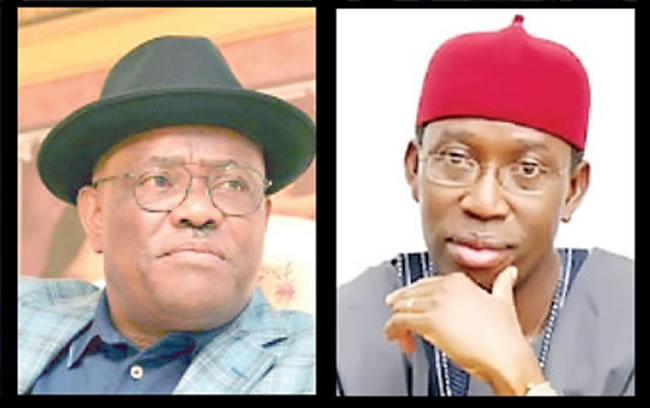 LEON USIGBE wades into the debate on the appropriateness of Governor IfeanyiOkowa on the presidential ticket of the Peoples Democratic Party (PDP).

Governor Arthur Ifeanyi Okowa was the dark horse in the race for the vice-presidential candidate of the Peoples Democratic Party (PDP) at a time the name of his Rivers State counterpart, Nyesom Wike, was on the lip of every party stakeholder. The special panel instituted by the main opposition party to help Atiku arrive at a suitable running mate, voted overwhelmingly to recommend Wike for the position and all appeared set for his unveiling until last minute intrigues pulled the rug from under his feet.  The emergence of the Delta governor as the preferred candidate has, therefore, drawn both consternation and delight depending on the sentiments of the individual analysing the situation.

Up until the day of the unveiling ceremony, Wike was thought to be the only person scheduled to be screened for the position.However, things took a different turn when Okowa met Atiku in his private residence in Abuja late on eve of the event to pressurize him to change his mind. A source privy to the meeting informed that Atiku was initially resolute on his choice of the Rivers governor but capitulated under the powerful argument put up by Okowa, especially on his contributions to the party and the resources invested in the race for the vice president’s post.

However, Atiku’s decision has driven a new wedge into the party as Wike’s supporters among the governors felt frustrated and let down by the former vice president. “I will not even leave my house today for anything. Let them do whatever they want,” one of the state governors and major backer of Wike, fumed when contacted on the morning of Okowa’s unveiling. Consequently, it was barely a surprise when, all the PDP governors known to support Wike shunned the ceremony. Only three governors attended, namely; Bala Mohammed (Bauchi), Udom Emmanuel (Cross River) and Godwin Obaseki (Edo). There was also palpable gloom at the party’s national secretariat following Okowa’s selection and it felt a bit scary for the party faithful who were unable to fathom why Wike appeared to have been so unfairly treated.

The argument in the party circle for the desirability of the Rivers governor on the ticket had been that he has immense political and economic capitals to bring to the ticket for a more probable victory in 2023 giving his antecedents in the years following the party’s loss of power in 2015 as well as the run-up to the party’s presidential primary. Wike successfully projected himself as the main benefactor and defender of the PDP, keeping it afloat when other illustrious members scarcely gave a hoot about the new opposition party. Indeed, he had often reminded his audiences of the fact that the PDP would have gone under completely but for him even though this had been interpreted in some quarters as developing a sense of entitlement.

One of his favourite targets for frequent dress down was Atiku, who he loved to point out, had abandoned the PDP to help the new alliance, All Progressives Congress (APC), to oust the former ruling party from power only to return to seek its presidential ticket. Despite Wike coming second at the presidential primary and confirming his mark as a critical player in the party, some observers believe that he lost out on the vice-presidential candidate slot because his perception of Atiku may have figured prominently in the former vice president’s consideration of a running mate. Moreover, his critics accuse him of brashness, being unpresidential in utterances and mannerisms and, therefore, a non-fit for the PDP vice-presidential post. Since he failed to clinch the post, there has been an eerie silence around the usually boisterous Rivers governor, which has left many stakeholders guessing as to what he might do.

The Delta governor though, has continued to receive messages of felicitation from many of the PDP governors who did not initially witness his unveiling. They are now expressing their confidence that he will be a great complement to the PDP presidential ticket. Other commentators are assured too that rather than damage the PDP ticket, Okowa brings on enough to salvage it.  Atiku said despite the buzz it could create around the ticket, he did not want someone whose life is filled with drama as a running mate, an obvious dig at Wike. Instead, he said that during his consultations, he spelt out the qualities such a person should have.  “I made clear that my running mate would have the potential to succeed me at a moment’s notice, that is, a President-in-waiting. In other words, the person must have the qualities to be President.  The person must have an appreciation of the deep rot which our country has been put into by the rudderless APC government; understands the great suffering that most of our people are going through and the urgency of relieving them of that suffering; understands the critical importance of economic growth and development to provide our young people with jobs, hope, and a pathway to wealth.

My running mate must understand that without security, development will be very difficult because local and foreign investors who have been scared away already, would not return to invest in our economy. Thus, my running mate will be a person who will stand by me as a I confront the frightening level of insecurity in our land. In addition, my running mate has to be someone who is not afraid to speak his mind and give honest advice, and, be by my side as I work very hard to reverse the destructive impact of the past seven years of the APC government,” he said.

Speaking about Okowa, Atiku declared: “Accordingly, let me state that the person I have chosen as my running mate possesses all those identified qualities. He personifies not only the seriousness the current moment represents for our country but also the future that our young people yearn for and deserve. He is a serving State Governor who has demonstrated, in his State and through his conduct, that governance is about service to the people.”

Okowa’s supporters agree with Atiku that he fits the bill. They point out that he comes with a great deal of experience in governance. A former local government chairman, a former state commissioner, a former secretary to state government, a senator, and now, a two-term governor, whose administration, they observe, has presided over one of the most peaceful states at a time insecurity is ravaging large parts of the country. They also credit him with growing Delta State’s economy by 51% from N2.96 trillion in 2015 to N4.471 trillion in 2019. He had also frequently been called upon by the PDP at times of need for calmness, credibility of process and sense of direction, leading him to being appointed as the chairman of multiple national convention committees. He conducted them without controversies, thereby, enhancing the internal democracy of the party.

More poignant is his Igbo origin, which observers say is important to get some sort of approval of the South-East for the PDP presidential ticket against the backdrop of agitation for power zoning to the region that had been one of the party’s strongholds.  “I fit into all the divides. My brothers in the South-East, I’m part of them.