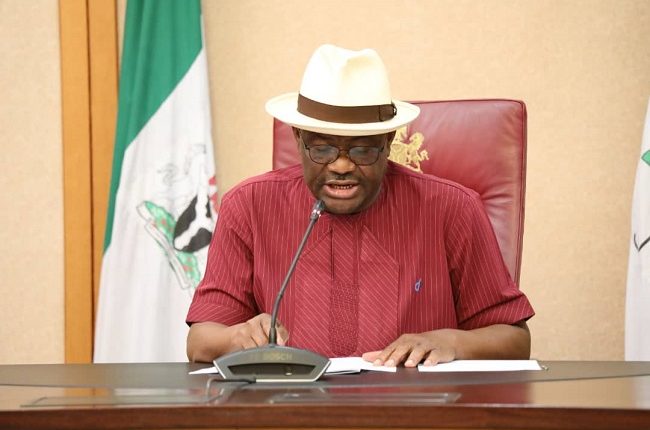 Rivers State governor, Nyesom Wike, has foreclosed the possibility of free medical services in the state, citing high cost of equipment and other facilities as reasons.

He said his administration had spent over N9 billion in upgrading structures and installation of new equipment at the Rivers State University Teaching Hospital (RSUTH).

He disclosed this on Friday at the foundation laying ceremony for the construction of a renal centre at the Rivers State University Teaching Hospital (RSUTH), Port Harcourt.

According to the governor, the fact that 40 per cent of the 2021 budget of the state is dedicated to provision of quality healthcare delivery is a further demonstration of the priority placed on the sector.

Consequently, he said the state government could not afford to implement free medical service programme in the present economic circumstance.

The governor said he made promise to Rivers people that the best will be provided to them in all sectors of the society within his capability because of the mandate they gave to him.

“If you look at the budget, the health sector alone, what it’s taking from the Rivers State government is not less than 40 per cent of the 2021 budget,” he said.

While dismissing the request for a subvention for RSUTH, Wike commended the Chief Medical Director and his team for their commitment to turn around the fortunes of the hospital.

“I have never seen anywhere that health services can be totally free. They’re telling me that people who come here can’t pay. I have never declared that this state is going to take over the health fees of anybody,” he added.

Former Minister of Transportation, Dr. Abiye Sekibo, who performed the flag off, noted that Governor Wike’s achievements in the health sector in particular, surpass what former governors of the state had done.

Dr. Sekibo said that Governor Wike has given equal attention to every section of the health sector by providing complete health infrastructure that is positioning the state as a medical tourism destination in Nigeria.

June 12: Only peaceful protest will be allowed in Ekiti, say Police

JUST IN: Buhari to address Nigerians on June 12 at 7 am