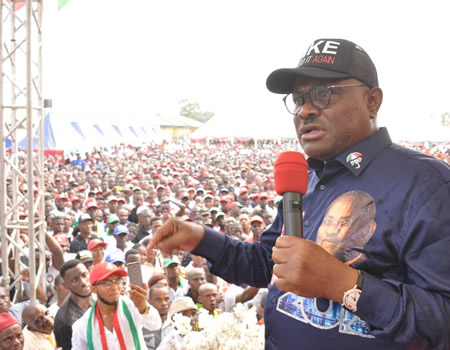 Rivers State Governor, Nyesom Wike has declared that the state will not allow the use of N-power personnel as INEC Ad-Hoc Staff during the February and March General Elections.

Addressing the PDP Campaign Rally for Ikwerre Local Government Area on Monday at Omagwa, the governor said that the N-power list is concocted to favour APC with a view to rigging the 2019 General Elections.

“N-power personnel will not be allowed to serve as INEC Ad-Hoc Staff in Rivers State.  If you bring them, we will chase them away”.

Wike said all Nigerians should share in the blame of allowing a man without knowledge of the economy to emerge as president of the country.

“The mass unemployment across the country is due to the emergence of Buhari. All Nigerians should share in the blame for their suffering.

“We took our future and mandate and handed over to people who don’t understand job creation “, the governor lamented charging the people to vote for the PDP Presidential Candidate, Atiku Abubakar for his understanding of the economy and ability to create jobs.

He said: “All his life, Atiku Abubakar has been involved in job creation.  He is one of the highest employers of labour in Nigeria”.

While urging the people to vote for all PDP candidates, Wike said that during his second term he would construct Omerelu and Omagwa Internal Roads.

Rivers State PDP Chairman, Bro Felix Obuah performed the traditional handing over of flags to PDP candidates during which he appealed to the people of the area to remain steadfast.

Former Rivers State Governor, Sir Celestine Omehia, in his remarks said Governor Wike is a true son of Ikwerre who has transformed the state and the people are happy with him.

He said in Ikwerre Local Government Area, Governor Wike executed key projects that have improved the economy of the area.

“Wike is our son in whom we are well pleased. Ikwerre people are happy that you have kept your promises”, Omehia stated, adding that in the course his first term, the governor executed key projects for the good people of Ikwerre Local Government Area.

Chairman of Ikwerre Local Government Area, Mr Nwanosike  Samuel said that the use of security agencies to rig elections in the area will not work in 2019.