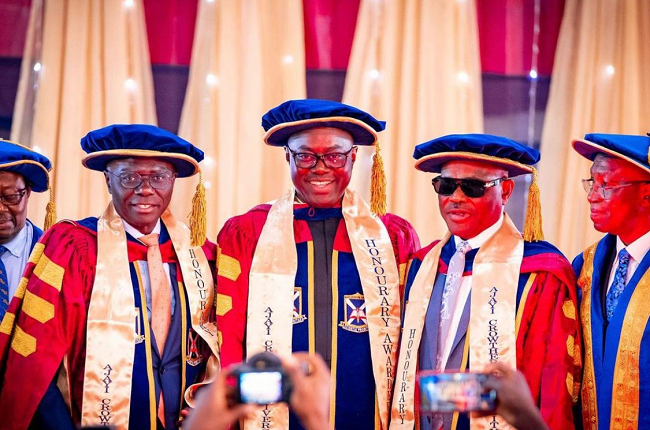 Speaking on behalf of the trio at the 14th convocation ceremony of the institution held at the Oyo campus, Makinde thanked the university for its immense contribution to the development of the state.

“I came in as an ordinary engineer. Now, my colleagues and I are going out with doctorate degrees. I want to use this opportunity to congratulate the graduates of today and yesterday. Today is majorly for PhD graduates. What you have is the peak of academic qualification.

“So, for most of you it’s a journey to taking a very big leap because some of you are not going to come back to school, you will join us in the real world. Because in the controlled environment here, you can basically predict how things will go but when you come out there, it is a different ballgame. 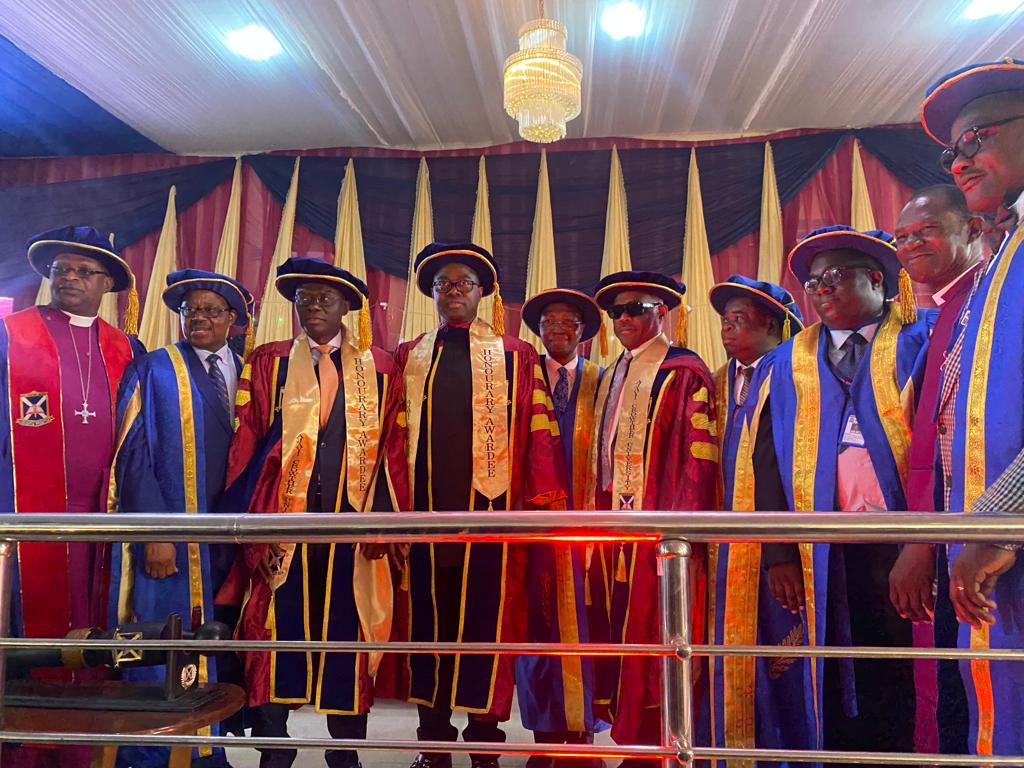 “You should be ready to take on further responsibilities. Whatever your plans are. This university has done its part to give you the necessary academic and moral training. So as you leave, you will always remember where you’re coming from.

“Let me say that this university has contributed immensely to the development of our state. The chairman of the road maintenance agency is an alumnus of this university. Before he came on board, they were abusing me that we weren’t paying attention to the inner roads. Since he came, the abuse has stopped,” he said.

Meanwhile, the university also awarded various categories of graduands of the institution including 1,547 graduates who bagged bachelors of science degrees, 583 who bagged postgraduate degrees and 34 who bagged doctorate degrees. 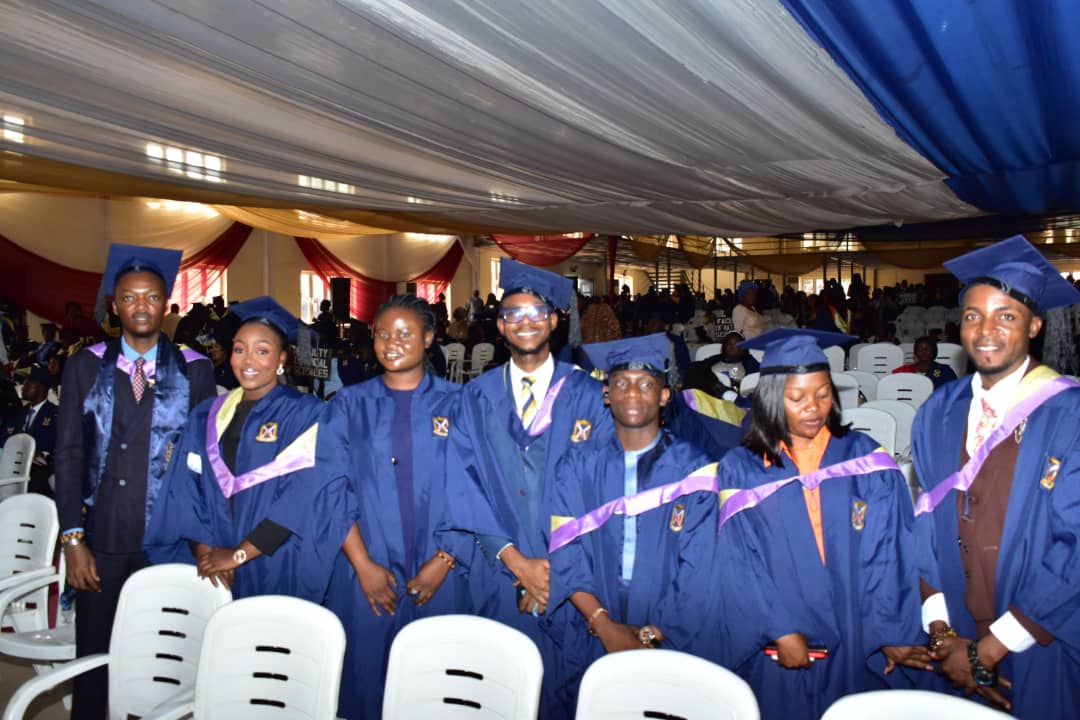 He urged the graduates to be totally self-reliant and not to stop learning as knowledge is a continuous adventure.

“From this moment, begin to practicalise the knowledge that you have acquired in Ajayi Crowther University, through constant learning and self-development. Albert Einstein, the celebrated German Physicist, once said that, ‘education is what remains after one has forgotten what one has learned in school.’

“We, therefore, charge you to keep updating and upgrading yourselves to meet up with the completions and opportunities in our ever-changing world. We recognize the fact that you have made significant contributions to global scholarships,” he said.

He also announced that the school has gotten approval of the National Universities Commission (NUC) to run nursing degree programme, adding that it is a step forward towards having more courses on offer in the Faculty of Basic Medical Sciences, which will, in no distant time, midwife the birth of the College of Medicine.

Earlier, the Chairman, Supra Diocesan Board (West), Church of Nigeria (Anglican Communion), Most Revd (Dr) Joseph Akinfenwa, who was represented at the event urged Nigerians to elect credible persons as leaders of the country in the next election.

Akinfenwa said: “As we approach the 2023 elections, we seize the opportunity of this occasion to plead with Nigerians to elect only credible and competent persons into leadership positions. If we do this, things will turn around for good, and our nation shall become better for all of us.” 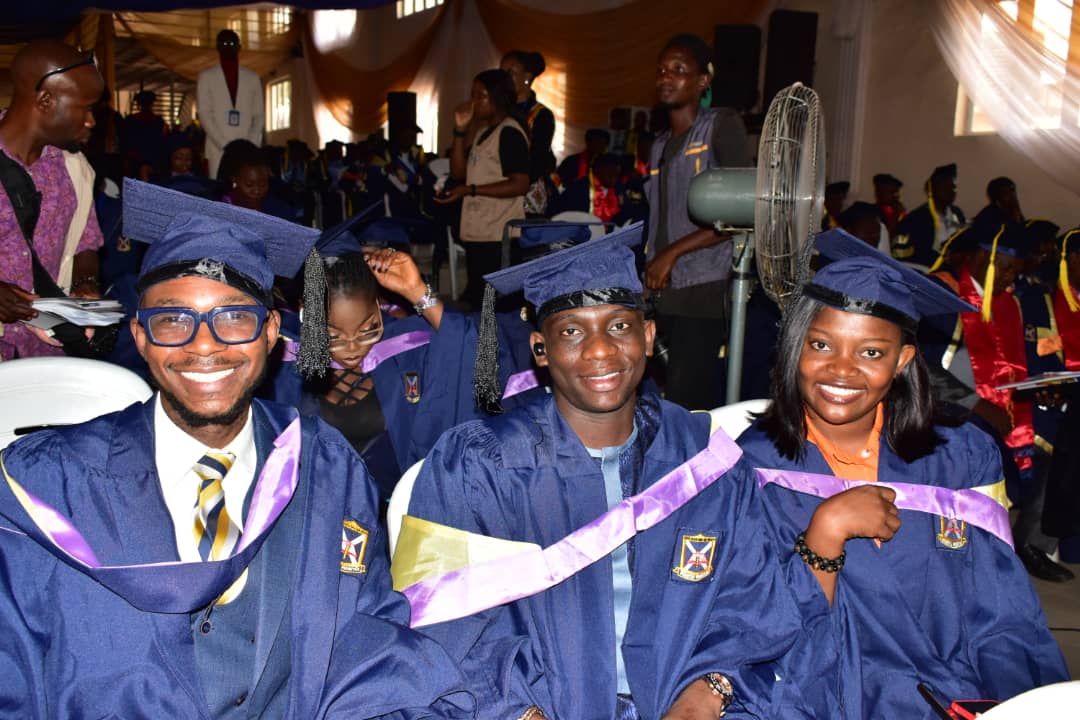 The Chancellor of the school, Chief Tunde Afolabi, bemoaned the present state of universities in the country as they battle with poor funding and lack of subventions, lack of required teaching facilities and expertise and commitment operational research, weak students competencies and lack of good performance in overstretched environment with a population explosion.

He listed other challenges to include a loose and ineffective administrative system with inconsistent application of rules and absence of an institutional framework for controls and good governance as well as ooor style of management leadership drawing in Universities due to lack of regular consultation to promote collective responsibility and unity of purpose.

On possible solutions to the myriad of challenges, he said: “Universities should constantly engage their Proprietors to provide subventions and grants for operations while University owners should prioritize fund utilization for capital projects and running costs.

“Tuition fees should be reviewed to meet the cost realities of day-to-day expenses in running costs, increased personnel costs and completion of capital projects while employed staff should be round pegs in round holes in the academic and non-teaching sectors.

“Efforts should be geared towards reviewing the security architecture of campuses and the use of modern technology in the surveillance and protection of its borders and fences.

“The University should be committed to reviewing gaps/failures/lapses in all projects for proper project implementation while the Management should take critical steps to ensure that municipal services are regular and adequate in the University.

“University Management should provide the enabling environment for work to be done, with team spirit and transparency.”

The Pro-Chancellor and outgoing Chairman, Governing Council of the institution, Chief Wole Olanipekun, announced the decision of the authorities of the school to appoint the Treasurer, Supra Diocesan Board (West), Dr Olutoyin Okeowo, as the next chairman of the council.

“Distinguished audience, it gladdens my heart that God really assisted us to achieve our aims in various ways, and we give immense thanks to him for being our fortress all the way. It is my pleasure to give an executive summary of the enormous development recorded by this University, as made possible by the Governing Council, over which, to the glory of God, I have been presiding over

“Our success records are both quantitative and qualitative and are put thus in terms of: Facilities and Infrastructures, Academic Development, Funding and Finances and Visitation Panel.

“I am very confident that if Ajayi Crowther University is better funded, it will compete with some of the best universities in the world. As I have mentioned in the past, the unconstitutional prejudice, which barred private universities from benefiting from the Tertiary Education Trust Fund (TETFund), the Education Trust Fund (ETF) and the Nigerian University Capacity Building Programme (NUCBP) of the Central Bank of Nigeria (CBN) exacerbates the University’s funding challenges.

“The fees from students alone cannot drive the university system. Once again, I appeal to the Federal Government to repeal this unjust Law and allow privately owned universities and other higher institutions to benefit from the proceeds of the funds which, in the real sense of it, belong to all Nigerians. The National Assembly should waste no further time at doing the right thing in respect of this discrimination,” he said.

The convocation ceremonies that took place on Thursday and Friday were preceded by the inauguration of the projects inlcuding the Wole Olanipekun Multipurpose Lecture Halls, a civil engineering workshop, new cafeteria at the Offa Meta campus, equipping of the Medical Science and Nursing Laboratories as well as the Imaging Laboratory Complex of the Radiography and Radiation Science programme among others.

APC is against BVAS because it wants to control outcome of 2023 elections —Sani, ADP presidential candidate