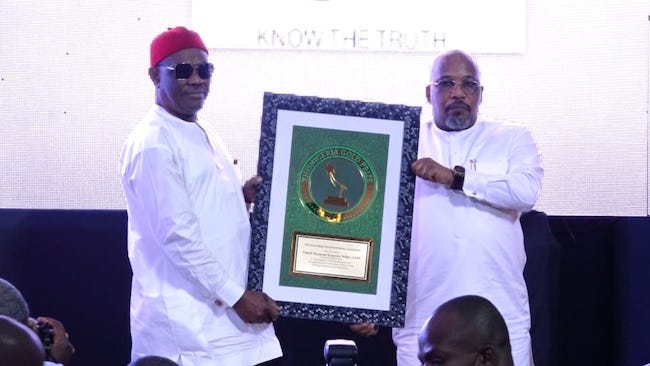 Rivers State Governor, Nyesom Wike, has charged the media to exert pressure on President Muhammadu Buhari to assent to the amended Electoral Act.

He said it was important that the media should enlighten Nigerians to know why there should be an electronic transmission of the election results in order to save the nation’s democracy.

The Governor gave the charge in his remark after he was conferred with the “Gold Prize for Exceptional Leadership,” by the ThisNigeria Media Newspaper in Abuja on Wednesday.

He said considering the importance of the Electoral Act amendment to the survival of the nation’s democracy, the media ought to deem it a priority to exert pressure on the President to sign the amended Act.

And as a watchdog of the society, the governor said the Nigerian media should enlighten Nigerians on the benefits of both direct and indirect primaries.

He stated the only way those in positions of authority can become accountable to the people, is when the electoral process is free and fair.

He observed that any electoral system that permits security agencies to be used to rig election, and for Independent National Electoral Commission (INEC) officials to be manipulated, will not yield accountable governance commending the  INEC for the successful conduct of the just concluded Anambra State governorship election.

The Governor said; “Now, they have performed well in Anambra State, everybody is praising them. But when they did not perform well in Rivers State, should we praise them? We cannot.

When a general in the Army will convert a whole division to INEC office, will you be happy?”

He urged Nigerians to always deemphasize their ethnic and religious affiliation in order for the country to achieve the desired national cohesion.

Chairman of the Nigerian Governors’ Forum and Governor of Ekiti State, Dr Kayode Fayemi, who chaired the occasion, said the country is going through tough times.

According to Wike, the current travails of the country also offers opportunities for the emergence of a great nation.

The guest speaker, Bishop Mathew Hassan Kukah, who delivered the ThisNigeria inaugural lecture with the theme, ‘National Cohesion for Sustainable Growth and Progress: The Nigeria Dilemma,’ blamed the drafters of the Nigerian constitution for the country’s lack of national cohesion.

“Something as fundamental as a constitution, the debate and the issues that ought to form the kernel of our governance have never been subjected to the intellectual rigour that is required.

The result is that we have never debated our constitution based on the peculiarities, the cultural expectations,  the hopes, the anxieties, the fears of ordinary Nigerians.”

The publisher of ThisNigeria, Mr Eric Osagie said Governor Wike was conferred with the flagship award of the newspaper because of his exceptional leadership in the vanguard of the infrastructural revolution.

The “Gold Prize for Exceptional Leadership, according to him, is usually bestowed on that man or woman who has impacted exceedingly in the lives of Nigerians and in whose legacy has the potential of transcending time and space.

Wike, the newspaper noted, has injected over 70 per cent of the state income in the capital projects in the funding of roads and other critical infrastructure. A feat, that is unprecedented in the history of state administration in Nigeria.

In spite of the huge investment in the water sector by the government and international organisations, water scarcity has grown to become a perennial nightmare for residents of Abeokuta, the Ogun State capital. This report x-rays the lives and experiences of residents in getting clean, potable and affordable water amidst the surge of COVID-19 cases in the state…Wike charges media.  Wike charges media

The Lagos-Ibadan railway was inaugurated recently for a full paid operation by the Nigerian Railway Corporation after about a year of free test-run. Our reporter joined the train to and fro Lagos from Ibadan and tells his experience in this report…Wike charges media.  Wike charges media