Widows, underprivileged get palliative to survive stay-at-home in Ibadan

Features
By Yejide Gbenga-Ogundare On Apr 6, 2020 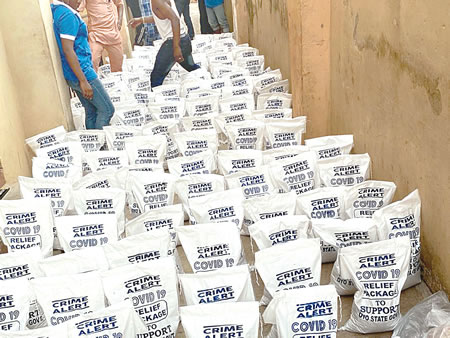 In order to encourage people to stay at home while government fights the spread of the coronavirus in Oyo State and also to cushion the effect of staying off work for labourers and widows who depend on daily pay, a security expert, Ambassador, Amos Olaniyan, the chief executive officer of Crime Alert Security Network, this week made provisions for over 100 people to have food items that can help them feed their family during the period they stay off work.

The initiative, which Ambassador Olaniyan described as a social corporate responsibility and his own contribution towards curbing the spread of coronavirus in Oyo state, targeted widows with children and people who work for daily pay in the society as beneficiaries. Majorly, widows and aged persons were drawn from different part of the state.

The distributed items were worth millions of naira and included foodstuffs like rice, beans, semovita, vegetable oil, palm oil, garri and protective kits like liquid soap, sanitizers and face masks.

Speaking during the distribution, Ambassador Olaniyan described the coronavirus pandemic as unfortunate and a situation which further makes the less privileged vulnerable, adding that they would need assistance at this period from people who have , especially when many cannot work again.

According to him, the company did not focus more on sanitizer and masks because it is conscious of the fact that people that have to stay off work and stay indoors would need sustenance which may not be readily available if they have to obey any lockdown order.

“I know sanitizer, face mask and other medical and preventive materials are very crucial at this period, but many people had distributed these materials and they cannot meet the pressing needs of the people. I have even seen some who collected two and sold one. That is why we thought that in order to help our people; we need to give them what will sustain them at home.

“For people to stay at home, they need food; and not everybody can boast of eating without going out. Even if what we are giving them won’t take them through the whole period, it will help them to some extent to keep hunger at bay while they make plans for survival. We want them to obey the order but to make that possible, we must ensure their needs are met. That is why we are doing this,” he stated.

The Crime Alert boss, while commending government’s efforts so far,  also called on other well-meaning Nigerians to complement the efforts of government by providing help for those who need it. He added that this is a period when everyone needs to be their brother’s keeper and lend a helping hand no matter how little it looks.

Ambassador Olaniyan further advised people to guard themselves against contracting the diseases because security of the nation begins with every individual, adding that it is only a man that is healthy that can pursue health and contribute his quota to the development of the society.

“People need to protect themselves from any diseases, not just against coronavirus, security agents can protect you from robbery, kidnapping, killing and other forms of attacks; no soldiers, police not even Amotekun can protect you from diseases. You have to do it yourself. You have to protect yourself  by following all the instruction medical experts are giving, social distance is very important. If you are not told, you know that you should wash your hand, Let’s make it our usual habit. Hand washing is very important” he stated.

Ambassador Olaniyan also urged people to try to stay at home and maintain hygienic environment to prevent what medical experts call community infections which Nigeria might not be able to manage if it occurs. He reiterated that preventing the spread of coronavirus is everyone’s responsibility.

In wishing Kyari dead we betray our conscience, religion