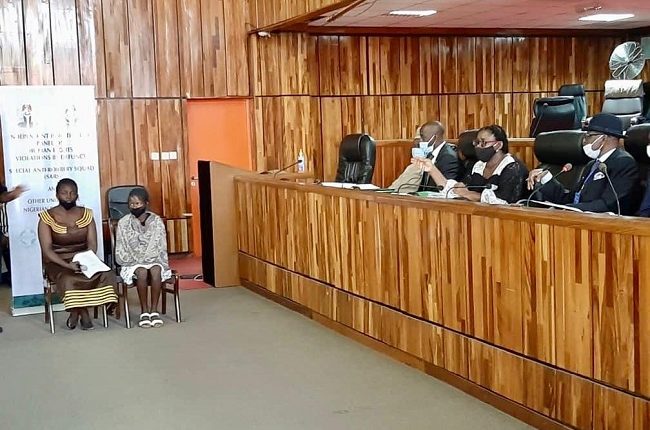 A widow, Patience Ajibo, on Thursday, told the independent investigative panel on the defunct Special Anti-Robbery Squad (SARS) and other police units set up by the National Human Rights Commission (NHRC) that she wanted justice for her 13-year-old daughter hit by police stray bullet last year.

Ajibo informed the Justice Suleiman Galadima (retd)-led panel that her daughter, Favour Ajibo, was hit by a stray bullet on Wednesday, November 27, 2019, at Wuse 2 in Abuja on her way back from school.

According to her, a doctor from with the Wuse General Hospital, where Favour was taken for a treatment called her on the phone to inform her of what happened.

“I wasn’t there when the thing happened. One of the doctors at the Wuse General Hospital called me. When I went to the hospital, they had already performed operation (to remove the bullet) on her.

“I met my daughter laying down in the hospital. I saw her with a bandage in her back but she was still bleeding. A policeman I met informed me that it was a police bullet that hit my daughter,” the widow told the panel.

She added that she took her daughter to the National Hospital in Abuja for further treatment in company with her brother, Ofoma Ajibo and friend, Ikechi.

“When we got to the National Hospital, she was given an injection and the bleeding stopped. I paid for her treatment the following day.”

According to her, her daughter was discharged the following day on her request, adding that they were going from home for further treatment after the discharge.

The petitioner stated that her daughter, who was 12-year-old as of the time of the incident, was in Junior Secondary School (JSS) 2 and writing her terminal examination when the incident happened.

She, however, informed that the victim had stopped going to school as she kept complaining of back pains, which she (petitioner) was not comfortable with.

Ajibo stated that she approached the school principal to give her daughter make up examination for her but, the principal refused.

“When she went back to school, I asked the principal to give her the papers she missed but they said no. I want my daughter to go back to school,” she said.

The petitioner informed that she borrowed N170,000 to offset her daughter’s hospital bill, adding that the Federal Capital Territory (FCT) Police Command only gave her N140,000.

She, however, said she was still paying for her daughter’s treatment.

“My daughter is always complaining that the back is paining her. I want a further diagnosis for her,” she pleaded.

The counsel for the NHRC, Kwadudi Okoh, informed the panel that the police told the Commission that upon the payment of the money to the petitioner, they had closed the case.

Asked what she wanted, Ajibo said she wanted the police to do more for her by supporting her to restart her food selling business and give her daughter proper treatment.

The chairman of the panel, Justice Galadima, commended the FCT Police Command for the prompt payment of the N140,000 to the petitioner.

He, therefore, urged the NHRC to liaise with the command with a view to further assist the widow.

Gov. Umahi formally defects to APC, says we are free from dictatorship