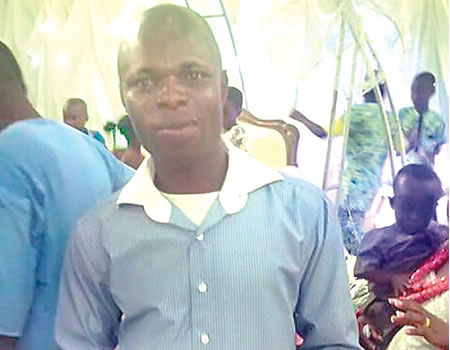 A photographer, Peter Greg Edogbeji, was preparing for his wedding even as the coronavirus pandemic raged. Unfortunately in the course of the lockdown in Lagos, he lost his life in an attack by hoodlums who unleashed mayhem on his community. TUNBOSUN OGUNDARE reports.

PETER Greg Edogbeji, 43, lived as a peacemaker in his Ajegunle community, a densely populated area in Ajeromi\Ifelodun Local Government area of Lagos State where he was born.

As the coronavirus continued to rage, so did the activities of hoodlums. Day after day, individuals and families were attacked and with the police practically unable to handle the situation, individual communities began to take their fate in their own hands.

Security committees whose duty it was to inform security operatives about the criminals and to safeguard lives and properties sprang into action. Peter, an orphan, was the general secretary of one of the committees.

Like every other day, he woke up full of life on Tuesday, March 24, 2020 and went to work as a professional photographer with no clue of the danger ahead. As evening approached he began to make his way back home when the unexpected happened.

Peter, a graduate of Yaba College of Technology (YABATECH) Lagos, reportedly walked innocently into the hands of hoodlums, who at the time were attacking and robbing people of their valuables. He ended up as a casualty.

According to Olusanya, he and Peter left Ajeromi Plaza (a popular shopping plaza in the area) where they had a brief meeting with some persons. He added that he (Olusanya) was to go to Ejigbo thereafter and he offered to convey Peter to his bus stop (Boundary) where both would disperse.

“On our way, we heard some noise and sighted some boys in an open field moving around with dangerous weapons and people running in different directions. We then saw the Baale of Oke-ira, Taiye Layeni and asked him what was happening.

“Peter at that point, came down from the car and followed the Baale while I was trying to get a safe place to park. I heard the baale calling the Divisional Police Officer (DPO) in charge of the area on phone to draw his attention to the incident, but they had almost gone out of sight by the time I finished parking.

“Not long after, some policemen came with their vehicle, but they turned back almost immediately without either coming near the scene or firing any bullet, even to scare and disperse the hoodlums.

“Yet, some of the hoodlums ran away and escaped through a narrow walkway nearby without knowing that others had laid ambush for their victims because I could see from a distance that somebody was being attacked. I didn’t know that the person was Peter. I thought it was somebody else because I could never have envisaged such.

“Something told me at that moment to leave the vicinity as it was already getting dark. And just as I had wanted to leave, a combined team of OPMESA and the Special Anti- Robbery Squad (SARS) arrived.  But the deed had been done. Peter had been macheted mostly on the head and in a manner that he would not survive. The baale was also attacked, but he escaped,” Olusanya narrated.

A CCTV camera footage obtained by Sunday Tribune revealed the horrific details of the attack. The footage showed how the criminals first inflicted several machete cuts on him until he fell to the ground and later came back to inflict another rounds of cuts on him probably to ensure he did not survive.

Sunday Tribune also learnt that Peter’s killers were members of Awala Boys, a syndicate that once specialised in using motorcycles to rob people of their valuables, including phones and use SIM cards to hack into people’s bank accounts.

It was gathered that Peter had on him one smart phone and one other small phone when he was attacked. The smartphone was taken away while the other phone was later found on the ground by a female resident.

Peter’s elder brother, Henry Edogbeji, was contacted by one of Peter’s neighbours to intimate him of his brother’s fate.

My Edogbeji, in an interview, narrated the aftermath of his brother’s death and the sorrowful state the family now finds itself.

“The person who called me didn’t tell me that my brother had been killed. He only told me they didn’t know his whereabouts. I then informed my younger sister and we both came to his house, which is our family house.

“On getting there, they said they heard from people in the community that some residents were attacked by hoodlums and that it was bloody but that they didn’t know the identities of those involved.

“That was how we went to Layeni Police Station and discovered he was the person attacked.  I learnt he was still alive when the policemen carried him from the scene to the hospital where he died same day. The way my brother was macheted did not portray his assailants as human beings. They are simply heartless persons. My brother died a painful death,” he said mournfully.

Henry also informed Sunday Tribune that he and his brother were orphans and that he was preparing for his wedding. He also stated that as part of Peter’s preparations, he had secured a room and a parlour self-contained apartment in Ikotun, though he was yet to move in fully, he was already spending weekends there.

According to Henry, Peter would have had his wedding introduction by the end of April but for the coronavirus pandemic, while his traditional wedding was fixed for three months’ time. The events were never to be and his remains were buried on Saturday, April 18, in Lagos.

Henry wants justice and an end to activities of hoodlums in Ajegunle and other communities.

“Otherwise if his killers should come back to the community without justice meted out, they would do worse things and others with evil intentions in Ajegunle and elsewhere would do similar thing, in the belief that they will also go unpunished.

“So, security agents should stand up and live up to its responsibility of protecting lives and properties of innocent citizens anywhere they choose to live in the country and also punish those who take innocent lives.

“People must be able to move freely in the streets and sleep with their two eyes closed at night. How could a group of young boys be terrorizing innocent people even in the daylight when security agents are there?

According to investigations, however, it was revealed that most of the hoodlums were known faces in the community with the residents doing all they could to curb their activities.

Reacting to the incident, spokesman for the Lagos police command, Mr Elkana Bala, a superintendent of police, said the Awala Boys, the suspected group that murdered Peter are well known to residents who had refused to be cowed by their threats.

Part of their efforts, according to him, is the formation of a security committee under the community policing initiative through which they help the police and other security operatives including OPMESA and DSS with useful information, noting that the efforts are yielding results.

Bala said two suspects had been arrested and charged to court while other partners in crime identified in the CCTV footage are currently at large.