The waters of West Africa, popularly referred to as the Gulf of Guinea (GoG) in maritime circles, has remained tops, mostly for the wrong reasons all through the first three quarters of 2020, writes TOLA ADENUBI. 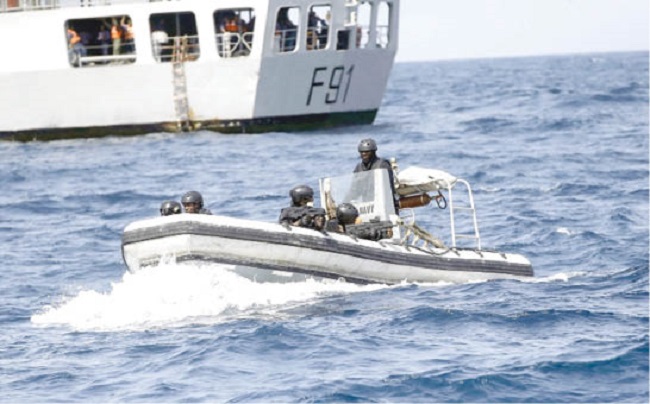 WHEN the current Director General of the Nigerian Maritime Administration and Safety Agency (NIMASA), Bashir Jamoh took over the reins of leadership of the maritime security agency in the close of the first quarter of 2020, and within his first hundred days in office, displayed to the public 10 arrested pirates, (a feat unprecedented until that time), the world heaved a sigh of relief that at last, sanity had come to prevail in the volatile Nigerian waters. However, maritime insecurity activities in the following nine months, within and around Nigeria’s territorial waters, have shown that Nigeria still has much to do.

Latest statistics emanating from the ICC International Maritime Bureau (IMB) has shown a rise in piracy and armed robbery on the world’s seas in the first nine months of 2020, with a 40 percent increase in the number of kidnappings reported in the Gulf of Guinea, compared with the same period in 2019. Pirates armed with guns and knives are abducting bigger groups of seafarers at further distances off the West African coast. IMB’s latest global piracy report details 132 attacks since the start of 2020, up from 119 incidents in the same period of last year.

Of the 85 seafarers kidnapped from their vessels and held for ransom globally, 80 were taken in the Gulf of Guinea in 14 attacks reported off Nigeria, Benin, Gabon, Equatorial Guinea and Ghana. In the first nine months of 2020, seafarers reported 134 cases of assault, injury and threats, including 85 crewmembers being kidnapped and 31 held hostage onboard their ships. A total of 112 vessels were boarded and six were fired upon, while 12 reported attempted attacks. Two fishing vessels were also hijacked both in the Gulf of Guinea.

The farthest attack from shore also involved the most crew kidnapped from a single vessel in 2020. On 17 July 2020, eight pirates armed with machine guns boarded a product tanker underway around 196 nautical miles southwest of Bayelsa, Nigeria. They held all 19 crewmembers hostage, stole ship’s documents and valuable items, and escaped with 13 kidnapped crew. The tanker was left drifting with limited and unqualified navigational and engine crew onboard. A nearby merchant vessel later helped the tanker to sail to a safe port.

Regional Authorities were notified and the 13 kidnapped crewmembers were released safely one month later. A more recent example was on 8 September 2020, when armed pirates attacked a refrigerated cargo ship underway around 33 nautical miles south-southwest of Lagos, Nigeria. Two crewmembers were kidnapped, but the rest of the crew managed to retreat into the citadel. A Nigerian naval team was dispatched, who boarded, conducted a search, and then escorted the ship to a safe anchorage for investigations.

WHY GoG IS HOTSPOT

In the words of a former Director of Nigeria’s maritime security firm, Global West Vessel Specialist Limited (GWVSL), Mr. Leke Oyewole Olugbenga,   the inability of different governments to monitor their maritime space is the major reason behind the rise in different piracy gangs in the Gulf of Guinea.

For Mr. Oyewole who was Nigeria’s first Presidential aide on maritime services, “most of these pirates, when arrested by the Nigerian Navy, are handed over to the Nigeria Police Force (NPF) for prosecution. The Navy or NIMASA does not prosecute. However, the Police Force that prosecutes are armatures when it comes to maritime insecurity nitty-gritty.

“Piracy occurs on the high sea, not within a nation’s anchorage area. What occurs within an anchorage area is called sea robbery. Maritime activities are very technical. Whatever crimes that happen within the ports, channels and anchorages can only be termed as robbery, but in this part of the world, we muddle everything together and label them piracy. It is only when crimes occur on the high sea that it is called piracy. So, on technical grounds, some of these arrested people will wriggle out of their offences. So it is not enough to arrest, we need to look more into how we prosecute these crimes.”

Another reason why the GoG is fast becoming the global hotspot of maritime crime, in the words of the erstwhile GWVSL director, is down to poor surveillance system of the region. Explaining how technology affects the GoG, Mr. Oyewole stated that, “Technology has improved to the extent that even when ships switch off their radar or their Automatic Identification System (AIS), they are still detected if they stray into the waters of saner climes.

“I was recently in a gathering of maritime security experts somewhere abroad, and I explained that it is no longer an excuse for governments in the GoG to say because ships switched off their radar or AIS, they were not detected. Technologies have gone beyond switching off of radar or AIS. If a vessel likes, let her switch off both the radar and the AIS, there are now modern technologies that detects such ships with ease. This technology is what Navies in saner climes rely on because it allows for accuracy when gathering intelligence.

“I give the Federal Government kudos over the Deep Blue project, but I just hope this technology is part of the assets of the Deep Blue project. It is not just enough to keep soldiers on the high sea. There was an incidence, when I was in office, a ship was shot at along Warri channel all because she refused to stop, and I had to approach the Navy to ask why the ship was shot at. I was told that the ship was asked to stop, but it refused, and I had to explain to them that the channel was a narrow one and there is a possibility that if the ship stops, it could run aground. Moreso, this ship is heading for the port, why not follow her there and then arrest her.

“We have been told that the Deep Blue project has many drones for surveillance, but has anybody asked about the endurance level of these drones? Or how many are these drones? The GoG is a tiny space to capture on satellite, but do we have any relationship between our maritime agencies and the National Space Research and Development Agency (NSRDA)? If NSRDA is engaged to do analytics of the GoG, it will serve NIMASA, Navy, Nigerian Shippers Council (NSC), Nigeria Ports Authority (NPA) and every other security related agencies. All it takes is a Memorandum of Understanding (MoU). Right now, that is not there, and I am not sure it’s part of the Deep Blue project.”