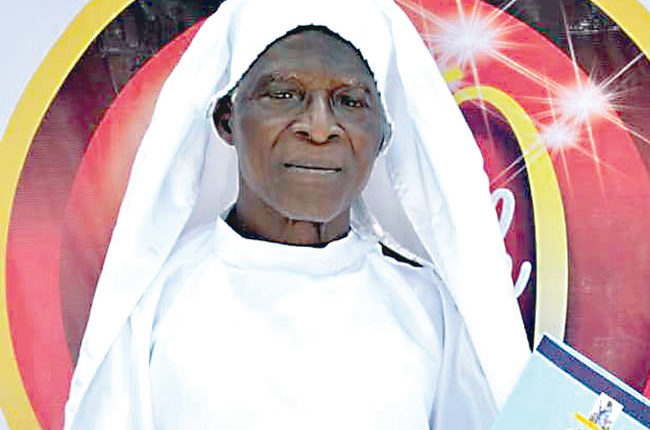 Venerable Adeniyi Oluwabiyi is the minister-in-charge and head of District 4, Holy Flock of Christ Church, Foko Amule, Ibadan, Oyo State. In this interview by SEYI SOKOYA, he speaks on the doctrines of the church, the importance of creating room for the younger generation to take over the mantle of leadership, including current issues affecting the country.

A close observation revealed that the Holy Flock of Christ Church shares similar doctrines with the Cherubim and Seraphim and the Anglican Communion churches. As one of the leaders of the church, what do you have to say this?

Of course, there are similarities and differences. The Cherubim & Seraphim church was headed by Moses Orimolade. Saint Babatunde Lawrence was the founder of this church. He was under Orimolade in the C&S. Orimolade selected seven leaders, among whom was Babatunde Lawrence. He was the number three in the ranking and had four others behind him. Babatunde Lawrence later had the heavenly mandate to establish his own church called the head of the Holy Flock of Christ.

He told the management that he was leaving and was not inviting anyone to follow him. Three others out of the seven followed him and the rest is history today. The church has continued to grow in leaps and bounds even after his passing. We recently celebrated the 80th anniversary of the establishment of the headquarters of the church in Ibadan, Oyo State. Truly we have some similarities, but there are obvious differences. We and C&S are both white garment churches, but in our church, we don’t clap. We have a way of expressing our joy.

You mean clapping is not allowed in Holy Flock of Christ church? Why?

We say people express their joy while clapping in the church, but Satan will come in to do otherwise. In other churches where people go to the extreme by falling down in the name of prophesying or seeing visions, no one falls down here. Any gathering where people clap and dance uncontrollably paves way for the devil’s penetration and manipulation. Such activities are not part of our doctrine.

What are the other don’ts of the church aside not clapping, because we have also observed that the church doesn’t take offerings?

We neither sell nor buy on Sundays. It is a Sabbath Day. Significantly, today is the second day of the desecration of the Sabbath Day. This is why we don’t collect any form of offering in the church; the congregation goes out to drop their offering and return into the church for blessings. You cannot see members spraying or pelting money on one another in the church. Also, we don’t go to the jungle for any act of deliverance. We pray and sanctify water or anointing oil for deliverance in the church premises.

Not receiving offering or tithe in the church auditorium looks strange, why is it forbidden for the church not to take offerings in the church. Is this biblical and how did the church leadership came to this practise?

We don’t take this with levity in our church. You see people spraying money in the church in other denominations, but at Holy Flock of Christ we follow the Bible strictly and make the temple of God sacred.  Though, the Bible says we should not come to His house with empty-hand, but we should not forget that it is the same Bible that established the significance of the church as the temple of God, which must always be kept Holy. According to the scriptures, Jesus sent out the people buying and selling in the temple. That is why we do not spend or spray money in the church; we come out of the church auditorium, and give our offerings.

One other significant thing noticed is that men’s garments also have capes and the white garment is also different from the usual white garment of other churches, why?

When the founder of the church left C&S, on May 15, 1932, this first set of garments… the seamstress that was making them was instructed that nobody should take the samples out, but the persons that flouted the instruction and smuggled it out became blind forever, because they flouted the order of God.

The church has been around for over 80 years and much has not been heard about it, especially with its uniqueness, why?

Yes, we have been around for decades now, but the philosophy of the church is to remain focused on the core duties of populating the kingdom of God and nurturing people with the right teachings of the Bible. So, we shun any means of distractions. We don’t make noise about ourselves; the founding fathers have laid a good foundation to follow and we must not deviate from it.

This is why many people may say the church is not known. The church was established 80 years ago. So, this great history shows that we are not new in Christendom. In this ministry, clerics or church leaders are selected divinely. As for me, I had wanted to return home, but God said I should stay. When the head of the church in Ibadan died on September 29, 1981, another pastor was selected before me. The selection was on divine instruction. If you have selected divinely, it means you have been selected for anointing. You have to keep the norms, dos and don’ts of the church. If you do otherwise, you will pay dearly for it. The setting is Anglican, but our mode of worship is different. We are a white garment church; we sing, read lessons, listen to sermon, and go home.

How has the experience been as the church leader?

I am 76-years-old. I retired as civil servant in Ogun State as an Assistant General Manager. Since I took over the leadership of the church, I have been grooming the younger ones that will take over from me. They have been doing most of the job. If I am not around, church will move forward because of my style of leadership. The younger generation is the future of the church and they should be nurtured well and given the opportunity to take leadership roles now. We will correct and guide them in order to keep upholding the legacy and move the church forward. The church is indeed building the young ones to take over from where we would stop.

Going by your philosophy of giving youths the opportunity, what do you have to say to the recent agitations of youths agitating against bad governance in the country and to be given a chance to take charge of the country?

The political scene of Nigeria is not what it used to be and this is why the youths are saying people who have been in power for donkey years should leave. That is how it should be. How can you be a Senator for four years and you become the governor for another four years, and you still want to be the president? Why not leave the scene for others. This is affecting the leadership of the country and unless we get it right, things will go bad.

This is not peculiar to the political scene alone; it also applies to the church. Whether we like it or not we cannot be here forever, we will surely die and people will take after us. I remember when I was in active service. In August 1999, a circular came out that anybody above 60 and has been in service for 35 years should leave. I was privileged; the two officers before me were affected and they had to retire. They were asked to hand over to me. That was how I became the Assistant General Manager in Ogun State then.

How has the experience been working for God since your early years?

There were attacks from the devil and from different angles. They used various forms of attacks, but if one is steadfast and consistent, the God one serves will always vindicate and protect one. With my wealth of experience as a cleric, no genuine and anointed pastor will be hungry. God will commission people to feed you. Unexpected offerings and gifts will come. How much is my pension? Help comes from people I do not know.

It takes a lot of sacrifices to remain relevant —Eniola Badmus

Tribute to the organ grandmaster who played at Awolowo’s funeral