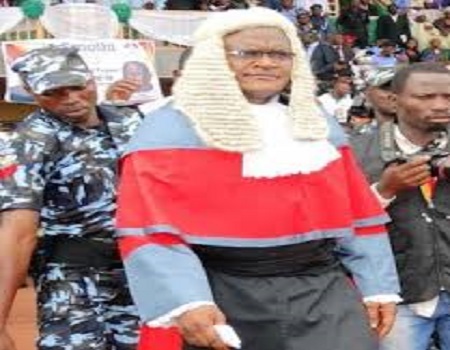 THE Chief Judge of Ekiti State, Justice Ayodeji Daramola, has said the new high court complex built by immediate past governor of the state, Ayodele Fayose cannot be put to use because of its design.

Justice Daramola, who spoke at a church service to mark the beginning of the 2018/2019 legal year, in Ekiti State, on Tuesday, said the new high court complex could not function properly as courtrooms in its current state and therefore called on Governor Kayode Fayemi to help reconstruct it.

Justice Daramola said: “Since the creation of Ekiti State on 1st October 1996, the Judiciary has suffered acute shortage of court halls and office accommodation.

ALSO READ: What I told my children on polygamy —Oga Bello

“It is thanks to Mr Ayodele Fayose’s administration that the problem is largely solved now with the construction of the Justice Ademola Ajakaiye House.

“As laudable as the new building is, it is still in a way, a hybrid of absurdity. In its present state, it can’t properly and comfortably function as courthouse as it was not properly designed for that purposes nor was it designed for administrative purposes.

“That, of course, is why we have not been able to put it into use since that building was commissioned earlier in the month of May this year.

“Our appeal now goes to the current administration of Dr John Kayode Fayemi to come to our rescue in reconstructing the interior of the new building to enable us put it into appropriate use.”

Justice Daramola also sought a better funding of the Judiciary, saying with proper funding, that arm of government to remain truly independent and better perform its constitutional roles.

Governor Fayemi, while addressing the congregation, urged the cooperation of every arm of government to make Ekiti fulfil the purpose for its existence.

The Attorney General and Commissioner of Justice, Mr Olawale Fapohunda, in his speech, called for the support of the Bar to fight crime in the state and ensure that criminals were tried and convicted for the crime they commit.

The Anglican Bishop of Ekiti Diocese, the Right Reverend Christopher Omotunde, at the service called on the concerned authorities to provide judges and other judicial officers with adequate security.

According to the cleric, one police orderly given to each judge for protection was inadequate “because of the sensitive nature of their job” describing such police orderlies as “mere decoration.”

He also called on judicial officers to be above board, fearless and be guided by the fear of God in the discharge of their duties.