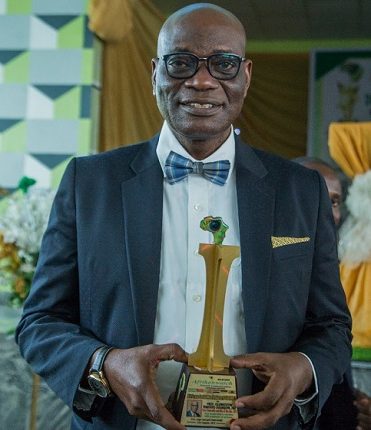 An international online investigative publishing outfit, Afrikanwatch Network Communications has explained why the Vice-Chancellor of the University of Lagos (UNILAG) Akoka, Prof Oluwatoyin Ogundipe won her 2021 Man of the Year award.

Ogundipe was conferred with the award, on Saturday, August 21 at the awards and annual lecture of the publishing outfit held at Yaba College of Technology (YABATECH), Lagos.

The organisers said Ogundipe was honoured based on his refusal to bow to unethical practices and pressure in an institution as UNILAG as well as promotion of research, entrepreneurship and creativities among staff and the students of the university.

Ogundipe, according to Editor-in-Chief of Afrikanwatch, Mark Columbus Otgu, is also known to have demonstrated determination to turn UNILAG into a better brand that would rank better in the comity of world universities.

He noted that other award recipients were equally honoured based on what he described as immense contributions to nation-building and humanity.

Prof Ogundipe in a statement made available by the university’s spokeswoman, Mrs Nonye Oguama, thanked the organisers for considering him for the honour, saying he would forever cherish the gesture.

He, however, charged Nigerians to be positive-minded about the country, saying there is no perfect country, nor institution nor individual in the world.

According to him, every country has its ugly side and what makes the difference is that citizens of some countries choose to celebrate their positive sides over the negative and through that, attracting foreign investments directly into their economies.

“So, let us all take active parts in the processes that will lead our dear country Nigeria to become economically and politically prosperous,” he stressed.

Oguama added that Professor Solomon Akinboye of the Department of Political Science, UNILAG was also honoured as the Afrikanwatch National Grand Mentor at the event.

In spite of the huge investment in the water sector by the government and international organisations, water scarcity has grown to become a perennial nightmare for residents of Abeokuta, the Ogun State capital. This report x-rays the lives and experiences of residents in getting clean, potable and affordable water amidst the surge of COVID-19 cases in the state.    Why Unilag VC won our Man of Year Award, says Afrikanwatch