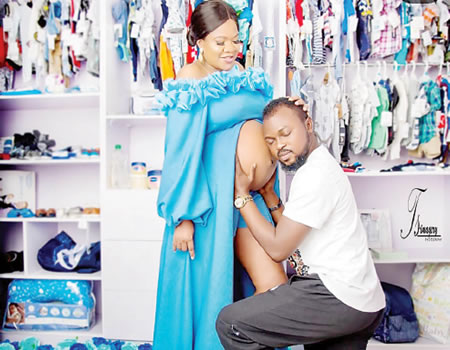 As congratulatory messages keep pouring in for popular actress, Toyin Aimakhu and her lover, Kolawole Ajeyemi, on the arrival of their new baby, R has gathered that the couple chose to keep the pregnancy and their relationship from the public due to certain ‘spiritual’ warnings

Many people, especially her fans, were surprised that the actress was engaged to Ajeyemi, an actor and movie producer in the Yoruba movie industry, but the couple who had been seeing each other for over a year did not bother to make their affairs public.

Not many people saw it coming as some were of the opinion that the actress, whose marriage to Adeniyi Johnson ended on a sour note, might not be giving love a chance any time soon let alone falling in love with another actor, who was not as popular as her.

There were fears that the relationship might suffer a setback because Aimakhu and Johnson had not finalised their divorce matter in court.

Though Aimakhu and Ajeyemi were said to have dated before during their early days in the industry, they rekindled their love affair around October last year.

Save for some senior colleagues of the actress who knew how the relationship started, others were not aware until the actress started being absent at locations as suspicion grew over her absence on social scene and events.

Information gathered by R revealed that the couple were said to have been warned by their ‘spiritual fathers’ to avoid going public with their affairs while they also pleaded with some of their colleagues who were privy to their closeness to keep it secret.

R learnt that shortly after the actress got pregnant, she decided to stay away from public glare and avoided movie locations.

It was gathered that they had a quiet introduction ceremony in Ibadan, Oyo State, early this year with only family members and a few other close friends of the couple informed.

A source who was privy to happenings within the family hinted R that the actress could not hide her joy when she got pregnant.

Those who attended the baby shower some weeks back were said to have been told to keep things under wraps until she delivers safely.

The social media in the last few days had been awash with the news of the arrival of the couple’s baby even as some of Aimakhu’s fans were surprised that the actress, who loves to be called World’s Best, kept them in the dark about her marital status and the delivery of the baby.

While Johnson has congratulated his ex-wife on the arrival of the baby, popular actors and actresses have praised him for his move to send the message, saying that he had earned their respect.

What is the significance of holy communion?