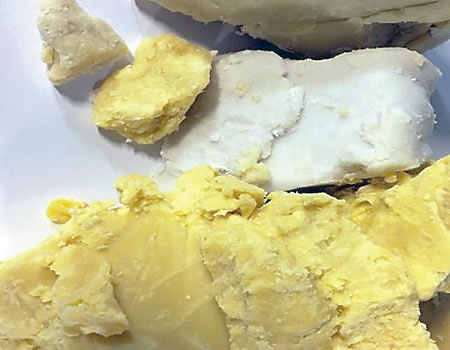 Shea butter is not only great for the skin; it is a great remedy for an aching knee. It significantly relieves the joint pain, stiffness and reduced mobility associated with knee osteoarthritis.

In a clinical trial of shea butter in 34 persons with osteoarthritis, researchers found it caused an improvement in functionality of the knees by 30 per cent after 16 weeks of its application. Also, there was a significant reduction in the level of pain and stiffness experienced.

These were volunteers recruited from the outpatient department of the Physical Medicine and Rehabilitation Department, China Medical University Hospital, Taichung, Taiwan.

Osteoarthritis, the most common form of arthritis, is the leading cause of chronic disability. It most commonly affects the knee and has an impact on the health-related quality of life of the elderly. Its symptoms may include joint pain, tenderness over the inside of knee, stiffness, locking, reduced mobility, atrophy of lower extremities, and decreased walking speed.

A lot of arthritis sufferers very often turn to natural herbal remedies and botanical methods to gain release from their symptoms. Remedies that have shown some promise in helping to treat the symptoms of arthritis include shea butter.

The researchers, in the 2013 study published in the journal, Evidence-Based Complementary and Alternative Medicine, stated that the observed relief in symptom and improved muscle control was consistent with past findings on the analgesic effect of the shea nut oil extract.

That the symptoms and muscle functions are improved significantly after 16-week intervention butter, they linked to shea butter constituents causing a reduction in the inflammatory effects of osteoarthritis.

The inflammatory process which is associated with arthritis occurs in response to a range of injuries from sunburn and wounds, to infection and auto-immune conditions. It is characterised by four physical signs; warmth, redness, swelling, and pain.

However, that improvement in symptoms did not immediately manifest in the activities of daily living; they stated was perhaps due to individuals habitual compensative strategies to cope with pain.

“Although improved muscle function was observed, including greater control and an increase in muscle strength to achieve a functional goal, the subjective feeling of improvement in the activities of daily living was not significant.

“The findings have proven the efficacy of shea nut oil extract as a complementary option to improve the symptoms and function in relation to knee osteoarthritis,” they declared.

The soothing properties of shea butter, commonly referred to as Ori in Yoruba, are well known on the African subcontinent where it grows in its Savannah belt.

It had anecdotally been used to help alleviate symptoms of arthritis and rheumatism when it is rubbed on the aching joint but its mechanism has not been clear. Also, laboratory studies have shown that the shea butter extract has properties that should make it an effective agent to treat arthritis.

There are many remedies that have shown some promise in helping to treat the symptoms of arthritis. For instance, a survey of anti-arthritic remedies used in Igbo tribal ethnomedicine in Nigeria named three plants. These are Lonchocarpus cyanescens, Costus afar and Terminalia ivorensis.

Clinical investigations on these herbs, according to a report in the 1982 edition of the Journal of Ethnopharmacology revealed that extracts of these herbs reduced inflammation and the associated swelling, checked diarrhoea, and ameliorated all signs associated with arthritis in rats.

Lonchocarpus cyanescens is known as ‘elu’ in Yoruba, ‘anunu’ in Ibo, ‘talaki’ in Hausa, ‘suru’ in Tiv and ‘ebelu’ in Edo languages of Nigeria. Costus afar is commonly referred to as ginger lily/bush cane while Terminalia ivorensis is commonly called idigbo, black afara, framire or emeri.

Ginger is very effective in the treatment of arthritis and a host of other ailments. Recent medical research in Holland has indicated that this, too, is much more than just myth. Eating ginger does, according to the Dutch doctors, help alleviate arthritis pain.

In one study, Indian researchers gave three to seven grammes of ginger a day to 18 people with osteoarthritis and 28 with rheumatoid arthritis. More than 75 per cent of those participating in the study reported at least some relief from pain and swelling. Even after more than two years of taking these high doses of ginger, none of the people reported side effects.

Verbal abuse accounts for 31.9% of violence in hospitals —Study