Chairman of the Edo State chapter of the All Progressives Congress (APC), Prince Anselm Ojezua, is among the top notch members of the party that met in Abuja, last Friday, to express strong reservations on the leadership style of the APC national chairman, Comrade Adams Oshiomhole. In this interview by Group Politics Editor, KUNLE ODEREMI, the Edo APC chair lists the major ‘sins’ of Oshiomhole and the domino effects on the party. 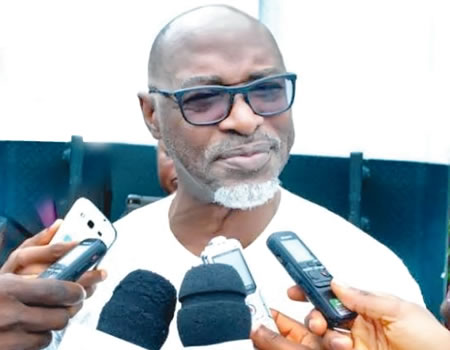 AT last, a meeting of the National Executive Committee of the APC was held last Friday in Abuja after a very long time.  How did it go?

But the APC national chairman, Comrade Adams Oshiomhole, seems to be at the centre of the crisis in the APC. We recall what happened in Rivers, Zamfara, Bauchi and a number of states before the last general election where the dog fight in the APC caused grave harm on its chances. Is he likely to survive the gathering storm now that more than 50 wise men from state chapters of the APC have decided to confront him frontally?

Let me put it this way: if you recall a year ago we elected him by a consensus. It is very clear now that he has become an object of controversy. So, that consensus does not exist anymore. That tells you the story. There is no more consensus; instead, there are now clearly people against him and people for him. That is enough for him to know what to do. That is why some of us are advising him, ‘you should resign by yourself honourably before they show you the way out’ because either way, the confidence is not there and even his own people have passed a vote of no confidence in him at home. You know people are looking at the suspension but before the suspension, they had already expressed their lack of confidence. So, if somebody tells you, ‘oh, the suspension is not legal; it’s not constitutional, what about the vote of no confidence? That one is their right. You can’t force confidence in anybody. The fact that people can come out, people from his own village can come out, to sign against him  already tells you that he has lost everything.

But the governors of the party appear noncommittal to the crisis. They seem to have sympathy for the national chairman?

The governors don’t have sympathy for him, but somehow, they do not want to be seen as leading the vanguard against him. They expect him to read in between the line and do what is honourable. But I’m not too sure whether the man has the capacity to exhibit that level of honour. So, ultimately, the message will get there and they will do that which they ought to do. That’s the way I see it. This sort of a thing, once it starts, I don’t see him surviving. You could see the way he conducted the APC National Executive Committee (NEC) meeting; he would not allow the meeting to take place. What we saw was just a charade. But, it is just a matter of time; once you lose the confidence of your people; you lose the confidence of your colleagues, you lose the confidence of key members of the party, what moral justification do you have to lead? If your people said they have suspended you from their membership, do you really have the legitimacy to conduct the affairs of the party as an officer? I think these are some of the main questions that people should ask. Can you function as an officer if your membership has been suspended?

The rule of the party is that you have been suspended from your ward; that has been done; it has been decided at the local government and state levels. What moral, legal or constitutional justification does he have to retain or function in the office, when his own people have expressed their lack of confidence in him? That is the issue.  It is that lack of confidence that led to suspension. So, if they are looking at the legitimacy or legality of the suspension, can they also question the lack of confidence? That one is a personal right retained in the person who is saying it?  It does not require process; it does not require any verification; it does not require fair hearing. It is not a case of say, you stole something. The person is saying I don’t have confidence in you; your leadership is in question.  That is what they are saying and if that happens, what should follow? You have to question what is required and if he doesn’t do that then, the leadership of the party has a duty to show him the way out so that the party can have some peace. Right now, there are problems in the party all over the country. It is not just in Edo State; in all parts of the country, there are serious problems and all over those places, it has been cited that he (Oshiomhole) has a hand in it. So, he has lost the confidence of the majority of the party faithful across the country.

Does the problem and serious challenges threatening the APC have anything to do with the leadership of Oshiomhole?

It has to do with his leadership style and attitude. If a man who assumed office in a democratic organisation now begins to behave as if he is in a military environment, what does that tell you? That is the thing. The facts are on ground about his dictatorial tendencies and actions.

Another group emerged barely 24 hours after you and other chairmen asked him to throw in the towel, to counter your position. Is the emergence of the counterforce suggestive about his popularity, and that you and others were only trying to make a mountain out of a mole hill?

But they claimed the group also comprises non-NEC members as well?

I agree. Let them publish the signatures. We publish our own, let them authenticate their claim by publishing the name and signature of the members. Enough of the deceit and hypocrisy that has characterised his leadership. We have facts; he was suspended in his ward and we published the list of those who suspended him and their signatures. Let him publish the counter if at all there is any.

In the address he delivered at the NEC meeting, President Muhammadu Buhari counselled on the need for the party hierarchy to operate within the ambits of democratic values and culture, especially by guaranteeing internal democracy and party discipline?

Yes, but they have not even told you the details of what Mr President said. What the president said is that the national organs of the party should allow the state and local governments to exercise the powers given to them by the APC Constitution. In other words, they should not be unduly overbearing because it is only the Commander-In-Chief that will just give order and everybody is expected to fall in line. In politics, it’s from bottom up; it is what the people want at the bottom that the national (organ) should do.

Events planning pitfalls and how to overcome them