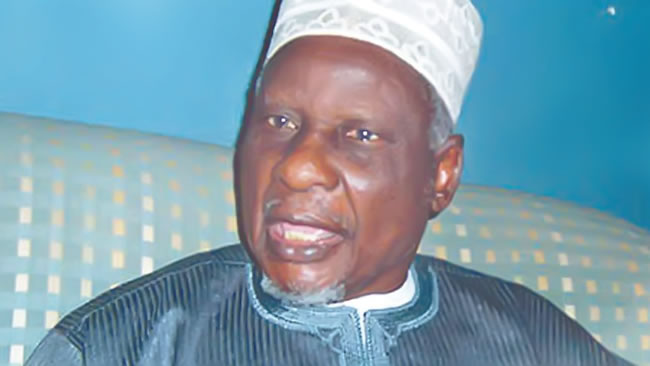 Second Republic politician and a foundation member of the Arewa Consultative Forum, Mallam Tanko Yakassai, has offered an insight into why the Northern Region opposed the first motion for self-government for Nigeria.

The first motion for self-government which sought independence for Nigeria in 1956, was tabled in 1953 by foremost anti-colonial and pro-democracy activist,  Chief Anthony Eromosele Enahoro, a member of the defunct Action Group.

Mallam Yakassai, a nonagenarian,  in a piece entitled, “Leadership Question and the Issue of Nigeria’s National Unity,” he wrote on the occasion of his 94th birthday attributed the fear of domination of the Northern Region by the Eastern and Western Region as responsible for the North resistance to the first motion for self-government.

Nigerian Tribune checks revealed that the independence motion triggered the historic Kano riot of 1953 as there were violent clashes between Northerners who were opposed to immediate self Government and Southerners made up of mainly the Yoruba and the Igbos who supported immediate independence for Nigeria.

The elder statesman who recalled that the  North was lacking in human resources to compete with the South revealed that as at 1956, the entire Northern Region could only boast of one University graduate in the person of late Dr R.A.B Dikko.

He further argued that the rejection of a compromise position of independence as soon as practicable by politicians from the southern part of the country, particularly members of the Action Group fuelled mutual suspicion and animosity which he noted have remained till date.

Sounding non-apologetic, the foundation member of ACF maintained that if Nigeria had attained independence in 1956, the sequel to Chief Enahoro’s 1953 motion for self-government, the entire North could have been under perpetual domination of the South, particularly the present-day Southwest zone.

He further claimed that narratives faulting justification of the number of local government for Kano state compared to Lagos continued to fuel animosity and undermine the unity of the country.

He said:” What I found very disturbing is that such utterances are directed against the unity of our country. Such narratives resembled that of some political leaders way back in 1953 when a member of the defunct Action Group Party introduced a motion in the House of Representatives, asking Britain to grant independence to Nigeria by 1956. Another Northern member of the House proposed an amendment to the motion by changing 1956 to as soon as practicable.

“This was because as at 1953, the entire Northern Region, which had 75% of Nigeria’s landmass and about 55% of the country’s population, had only one graduate, Dr R.A.B Dikko.

” At the same time, the South had thousands of graduates from different fields of expertise including law, engineering, medicine, administration, social sciences, etc. with about 90% of the public services manpower in the North were made up of expatriates or Nigerians from the southern part of the country. Action Group leaders rejected the compromise proposed by the northern legislator in order to enable the north to prepare itself for independence. “This is because if Nigeria was granted independence by 1956, the North would be under the control of the civil servants from the South, a situation that will put the North under perpetual domination of the South, particularly people from the Western Region, which had the preponderance of the public servants at the time. Such a scenario would have been a perpetual source of tension which would not auger well for the future stability of the nation. That seems to be the origin of the hostility of some Action Group supporters against the North till date. It is my humble submission that the remnant of such predispositions should  be discouraged.”

The nonagenarian who clocked 94 today faulted the resolution of the last September Yoruba Summit Group which called for a  fresh Constitution ahead of next general elections.

Mallam Yakassai further claimed that the position of the participants at the Summit amount to insincerity as he noted that there was no fundamental difference between the 1999 Constitution and its precursor, the 1979 Constitution.

“The main take-home is that the current 1999 Constitution was an updated version of the 1979 constitution, which was drafted with the full participation of elected and nominated individuals representing different segments of the country. It also benefitted from the endorsement of our known national leaders of the major ethnic groups, regions and political opinions of the country, including “a. Dr Nnamdi Azikwe of the NCNC in the First Republic and NPP leader in 1979;

“It is also interesting to note that these leaders who represented different geopolitical zones of the country endorsed the Constitution and virtually all of them contested elections under the 1979 Constitutions which was a product of a military decree. Among our founding political fathers only Sir Abubakar Tafawa Balewa and Sir Ahmadu Bello the Sardauna of Sokoto who were not alive in 1979. Therefore, it is inaccurate for the Yoruba Summit Group to claim that the 1999 Constitution is “fatally flawed” on the ground that the Constitution was the product of a military decree.”

Babagana Zulum, Words Are Eggs
Borno State governor, Babagana Zulum has, in the last couple of years, risen to become a poster of what Nigerian governors must be and how elected government officials must always intervene on the side of the people. Rather than sit in the comfort of the Government House, shooting out orders, Zulum goes to the…

Will Pondei Escape With His Loot?
President Muhammad Buhari has built the reputation of an employee who doesn’t like being prodded by his employers, to act. That smacks of irreverence uh? Well, he is President and maybe should not be seen scampering everytimeNigerians, want something done, no matter the…

The Crisis Of National ID
Since the Federal Government made the pronouncement on the National Identification Number (NIN), many Nigerians have become distraught as they face difficult times to get registered so that their mobile phone lines will not be disconnected by January…

Pulpit Abuse For Desecrating Politics
CHIEF Ayo Adebanjo was practically in tears as he called me on Thursday to ask if I came across a political address given by Pastor Tunde Bakare on Sunday. I could not lie to a 92-year-old man and I admitted I saw it. He then asked why I didn’t let him have it as it took another person to forward it to him…