Why Nigeria’s economy will grow faster under Buhari ― Oshiomhole 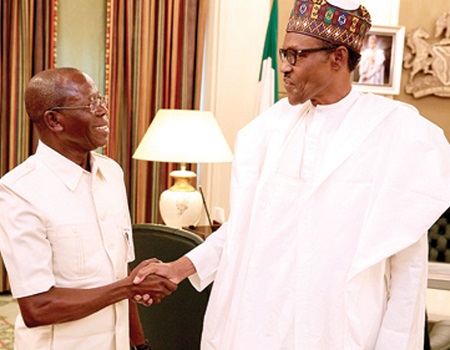 The National Chairman of the All Progressives Congress (APC), Adams Oshiomhole, has expressed President Muhammadu Buhari’s determination to accelerate economic growth with a view to meeting the needs of Nigerians in his second term in office.

In a statement signed by his Chief Press Secretary, Mr Simon Ebegbulem, on Tuesday, Oshiomhole said this when a delegation from the Vietnamese Government paid him a courtesy in Abuja.

The delegation was led by His Excellency, Nguyen Hai Ninh, the Deputy Chief of Office of the Central Committee of the Communist Party of Vietnam.

According to him, to achieve this, the APC led Federal Government is reviving our textile industry.

“The idea is to work towards taking advantage of comparative advantage in this sector in order to help provide jobs to the over 200 million of our population,” Oshiomhole said.

According to him, Buhari is in a hurry to provide jobs to unemployed Nigerians as well as accelerate the growth of the economy.

“It is as a result of this that the APC led administration is fighting corruption vigorously for our commonwealth not to be concentrated in the hands of a few, but that of the majority.

“With a population of 200 million, we have the advantage of a huge market, but we also have a huge challenge of ensuring an economic growth that will make those 200 million people comfortable.

“Before the coming of Buhari, we missed lots of opportunities,” he said.

Oshiomhole said that the country had challenges in power supply and security, adding that the President was fighting corruption to preventing few people from taking the wealth meant for the nation.

“Nigerians voted overwhelmingly for our President, so we are going to take advantage of the second term to ensure that we accelerate economic growth for us to meet the needs of our people.

“Right now, we are focusing on ensuring that we have a power supply. Vietnam has a strong textile industry and you have an international market, so I am glad to know about that.

“I am particularly keen on this because I work in the textile factory before and I think that there are one or two things we can learn from your experience because we are on the verge of reviving our textile industry which will help us create jobs,” he said.

Oshiomhole commended the Vietnamese Government for backing Nigeria in its bid for the Presidency of the United Nations General Assembly.

He said that the countries would continue to deepen relationships in areas of trade and investment for the benefit of the two countries.

Earlier, Hai Nin said the visit was to establish official relationship between the APC led government and the communist party of Vietnam.

He solicited the assistance of Nigeria in settling the crisis between Vietnam and China over the disputed South China sea, urging Nigeria to insist that the dispute be settled according to the UN established laws.