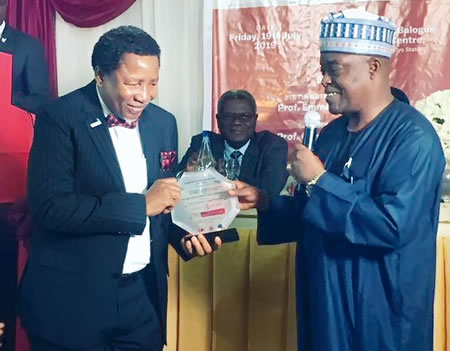 AGAINST the backdrop of Nigeria’s rapid population growth, a reproductive health expert, Professor Emmanuel Otolorin, has said Nigeria’s goal of raising its modern contraceptive prevalence rate (CPR) to 27 per cent for all women next year may be a miracle given the nation’s current CPR of 12 per cent.

Otolorin, the Senior Regional Programmatic and Technical Advisor, Jhpiego, an affiliate of Johns Hopkins Univerity, was the guest lecturer at the first annual Professor Babatunde Osotimehin National Reproductive Health Legacy forum. It was on “Family Planning 2020 Goal: Whither Nigeria”.

Late Professor Babatunde Osotimehin was the fourth provost of the College of Medicine, University of Ibadan; director-general of the National Agency for the Control of HIV and AIDS; Nigeria’s former health minister and executive director of United Nations Population Fund (UNFPA).

Professor Otolorin stated that attaining the 27 per cent modern contraceptive prevalence rate (mCPR) by 2020, a target set in 2012 but revised in 2017, is a mission almost impossible.

According to him, the implementation of government’s policies and guidelines to advance the utilisation of family planning methods in Nigeria and reverse this rapid population growth has remained suboptimal.

He stated that the rapid population growth was fuelled by Nigeria’s high fertility rate because many women of reproductive age do not use contraception for healthy timing and spacing of pregnancy.

Professor Otolorin declared that back in 2012, the government had made commitments to a sustainable financing for the national family planning programme, improving availability of services and commodities as well as building partnerships to improve access to contraceptives.’

Professor Otolorin, however, said Nigeria is not doing enough to ensure it attains its family planning 2020 goal.

According to him, “The Federal Executive Council approved a counterpart funding of $4million annually for procurement of contraceptives for a period spanning 2017 to 2020.

“The Federal Executive Council proclaimed contraceptives free of all charges to all states, including the Federal Capital Territory in 2011. But on the field, our healthcare workers are not fully embracing it. Some health workers are collecting free commodities and selling to patients, saying that they had used their money to print consultation cards.”

According to him, the government must embrace and scale up successful interventions on family planning as well as focus on end-users of contraceptives and their diverse needs to ensure appropriate behaviour change to ensure increased adoption of contraceptive use.

He said the focus to ensure increased contraceptive use should also be on men because of their importance in the power dynamics at home and within marriages.

Professor Otolorin declared: “Nigerians are mostly having babies by chance and not by choice, and there are numerous reasons for this lack of contraceptives. This includes lack of education and ignorance, myths and misconceptions about family planning; extreme poverty; lack of women empowerment; and shortage of service providers.

“Strategy without implementation equals hallucination. We know what to do, we know how to do it. This investment  on family planning saves lives; it empowers women and girls, it strengthens health systems and has a profound and lasting impact on development.”

Dr Omolaso Omosehin, UNFPA representative, said the late Professor Osotimehin is remembered for his tenuous advocacy for women’s health, gender equality and youth and women empowerment at UNFPA, and asked that the legacy he left behind be upheld.

He said the government had built a policy environment to make the implementation of the Family Planning 2020 goal easy and achievable as a country.

Mr Abdullahi assured of the federal government’s continued support to the sexual and reproductive health and rights of all women and men in the reproductive age groups with a view to ensuring responsible parenting.

Chairman at the occasion, Professor Dosu Ojendegbe, stated that people should not see family planning as control of population but rather the control of its effects on quality of life.

Ojendegbe, the director, Centre for Population and Reproductive Health, College of Medicine, University of Ibadan, said everything should be made possible for individuals and couples to be able to prevent unwanted pregnancy, just like headache or malaria.

NPA suspends operations of IOC’s over indebtedness to MWUN