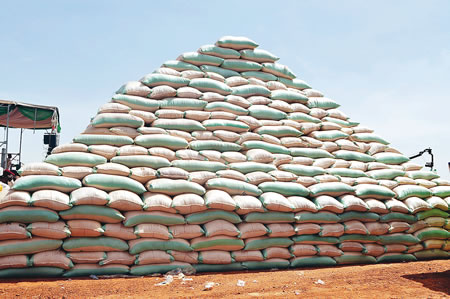 Before the massive revolution in food production through the Anchor Borrowers’ Programme (ABP), Nigeria spends an average of $22 billion ($7.92trn) annually on food importation.

A major big import then was rice which accounts for about $1.65 billion.

The ABP has saved Nigeria N369 billion per annum, while the country consumes N1.5 billion worth of rice every day.

This feat also saved the country the challenge of sourcing forex or devaluing Nigeria’s currency to finance this monstrous import wage bill.

Following this development, some rice producing states including Borno, Kebbi, Ebonyi, and Jigawa have made giant strides to make Nigeria self-sufficient in rice production.

On the Borno rice pyramid unveiled in 2018, the Chief Executive Officer, Wal-Wanne and sons limited , Dr Abiso Kabir, said despite the setback suffered in the hands of Boko Haram insurgents, he was able to mobilise more than 18,000 farmers across the state and provided them with funding, expertise and mechanization so as to yield positive outcome through the anchor borrowers programme of the central bank of Nigeria (CBN) and the Bank of Agriculture (BOA).

Dr Kabir said 33,000 bags of rice unveiled shows how much the government is doing in the Agricultural sector.

The farmer who said the subsequent unveiling of pyramids across states underscores the need to showcase agriculture to unemployed youths as an enterprise and the imperative of returning to the farm to guarantee wealth creation and food security, said a lot need to be done to encourage farmers in the country.

According to him, farmers face a lot of challenges which leads to discouragement. He said, “some are natural factors, which include climate change, weeds, pests and diseases. These of course affect farmers all over the world; the problem is that Nigeria lacks the infrastructure (like irrigation facilities) and planning to mitigate these realities.

Meanwhile, rice farmers in Nigeria have limited access to credit facilities. Those who do obtain loans often default on repayments, and are not able to use the money to build their enterprises.

Furthermore, rice farming is an expensive business: machinery, seeds, fertilisers and other agro-chemicals cost a great deal of money.

These factors leave many, especially small-scale, rice farmers in Nigeria living below the poverty line.

Speaking further on the barrier,  another farmer, Aminu Yusuf, said the country’s land tenure system is another barrier to farmers’ success.

Yusuf said, Nigeria also hasn’t invested enough in training farmers. There’s a lack of knowledge about how to use pesticides and herbicides; how to handle rice once it’s been harvested; and how to market one’s produce. And traders are reluctant to go out and purchase produce from rice farms in the country’s rural areas, because the state of the roads is so bad.

According to him, “mechanisation is rare. This is partly because it costs so much money, and partly because farmers tend to stubbornly stick to the old ways of doing things. The average Nigerian rice farmer depends on rudimentary and time consuming crude tools like hoes, slashers, sickles, axes and rakes for various farm operations.

Dr Kabir said the government could do much more to support rice farmers, he said it could do more than offering loans and setting up credit facilities by identifying and involving public-private-partnership with stakeholders of proven track records in formulating policies that will help the growth of the Nigerian rice sector.

“ I believe this will encourage rice farmers and more pyramids will be unveiled for the country to become self sufficient in rice production”, he said.

“Research institutes and universities also have a role to play. Academics who have been trained in agriculture can help farmers to learn more about the best, most cost effective and productive methods to improve their businesses.

He called on Borno State government to involve public-private-partner ship with stakeholders so as to boost production.

“All of this and more is necessary to ensure that Nigeria’s own rice production improves and that the sector grows”, he said

Why government should invest in rice farming

Dr Kabir harped on the need for the government to deploy resources to boost production capacity in the country.

He said “if Nigeria can cultivate 30 million hectares of rice, in a year, and with average five tons per hectare, we will have 30 million hectares multiplied by five, you have 150 million tons of paddy rice, if you add up such amount and discount those at about 50 percent, you are going to be having 75 million tons of rice, the point is that we have the capacity of being food sufficient.

“I don’t think the whole of Nigeria has up to 200 thousand tractors, so we need to invest heavily in the deployment of machinery across the country for all of the rice beds for people to be interested in farming.”

Dr Kabir said Boko Haram militants, drought and pests have combined to wreak havoc on farmlands in Borno State, leading to low output and huge losses to the farmers.

Also Nasarawa based farmer, Nurudeen Ali noted that the country must also fight against the external forces that are militating against its local farmers and producers.

He said there should be a synergy between the state, local and the federal government when it comes to harmonizing relationships, the differences and the area of challenges that are being faced across these levels of government.

While reiterating the need for investments in machineries, infrastructure, agro-processing, research, and in every sector of the economy that is capable of supporting a massive revolution in agriculture, he said “we have made progress but we are not there yet, we have the potential and the capacity to become food sufficient within the next decade. 84 million arable hectares of farmland is no joke. If you utilize 50 per cent of these arable farmlands, you will provide enough for your people, then you begin to preach free trade, why, because if as we speak, Nigeria is producing 10 tons of finished rice every month, then we will now begin to embrace free trade in rice, we will now say, when it comes to the rice industry Nigeria want to become a liberal economy.