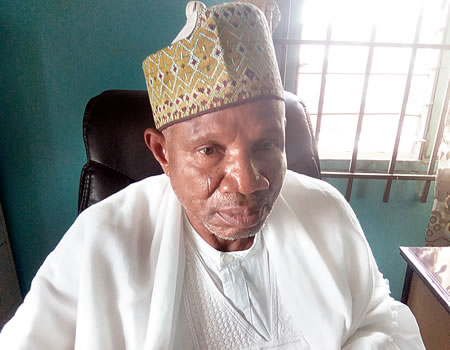 Ambassador Usman Bello is the Kogi State chairman of Jamatul Nasir Islam (JNI), co-chairman of Kogi State Inter-Religious Council,  and a former ambassador of Nigeria to Sudan. In this interview with YINKA OLADOYINBO, he bares his mind on various issues affecting the state and the country.

Who is Ambassador Bello?

I am Ambassador Usman Bello, born on January 21, 1941, a 1970 graduate of Business Administration from Ahmadu Bello University, Zaria and after leaving the university, I joined the Bank of the North where I rose to become a Chief Inspector. I retired from the bank in 1985. During my sojourn in the bank I was appointed a commissioner for finance in the old Kwara State. After my banking job, I later joined politics and attempted to be governor of Kogi State but I was defeated, however after the election in 1999, I was appointed a Nigerian ambassador and was posted to Sudan, I served for four years after which I was appointed chairman of Board of Internal Revenue in Kogi State, I also did that for years. Within this period, I also served as a member of the special task force for the revival of Ajaokuta Steel Company and presently, I am the co-chairman of the Kogi State Inter-Religious Council,  and state chairman of Jamatul Nasir Islam (JNI).

As the chairman of JNI, how does the body operate?

JNI is to propagate Islam in its pure form, to promote peace, harmonious exitence among all religious groups, to admonish adherents to keep to the tenets and the principles of Islam,  no quarrel, no violence, shun corruption, do everything that will promote the good of the society and practise your religion and serve humanity in the best way you can.

How far have you been able to achieve everything you said the group does in a state like Kogi that is multi-ethnic and multi-religious?

We have created linkages with all Islamic bodies throughout the state and we have branches in all the local government areas of the state, for each senatorial district we have our coordinators across the three senatorial districts. We meet at our secretariat to discuss issues that affect the organisation,  we bring all of them together, preach peace and understanding.

Since you have been leading this group, what has been your experience?

We are gaining grounds, we have had workshops in the three senatorial districts at various times, we have been bringing Islamic faithful together to discuss issues pertaining to our religion, we are spreading the gospel of Islam. We put our heads together and see how we can help government to ensure peace and peaceful coexistence in the state. We organise prayers, monthly for the government of the day, for peace to reign in the state, through that, we make our little contributions to the development of the state. There is religious peace in Kogi State, I can pick my phone and call the chairman of the Christian Association of Nigeria, he can pick his phone and talk to me, we work together to ensure religious peace in the state.

Looking at our society, many of the vices like corruption, violence that we preach against are being engaged in by adherents of the major religions, does that mean the church and mosque have failed?

I also feel the development the way many feel it, it has become part of us, it is a big challenge,  the only thing we can do is to strive to stem the tide of immorality and societal vices. It is not the making of any religion, if you talk of Christianity, it teaches you to be peaceful and go about your religion your own way without disturbing the other people and that is exactly what Islam teaches, but we still have our problems and that is why we won’t rest on our oars. We will continue to preach to our people to show good example, we will also try to encourage government to catch these people young, that is why we clamour for the teaching of Islamic and Arabic studies right from primary school to secondary school, to make the religion part of any growing up youth. With this, we can have a near perfect society. If we neglect the people to be on their own, they may go wrong because that is the work of satan, he will want to mislead them, unless they are properly guided. It is not that the pastors, the reverend,  the imams, malams are not doing their work but we have not been able to cover the society to ensure that we don’ t have the vices.

It seems the Christians have been more vocal in mobilising their members towards their civic responsibilities, particularly on PVC collection and elections, but much has not been heard from your organisation.

We are part of this society, whatever issues that affect us we must work together to ensure everything goes well. We have been doing this, we have been mobilising our members to collect their PVC, they may not participate actively in politics, but when the time comes, they must go out and vote for any party or candidate of their choice so that tomorrow, they don’t complain about government that is not responsive to their needs. People must be part of any process that puts people in power so that they will be able to ask questions when such government is going wrong. We have been doing that and working in collaboration with the Christians to do that, at any point in time, we commend government, we also criticise government for the good of the society.

You said Islamic and Arabic studies should be introduced in schools, are you supporting the call for the return of schools to the missionaries?

When we talk about this issue sometimes, it is borne out of our inexperience and we won’t blame the missionaries, when they built their schools it was a way of forcing other religion adherents to accept their religion and the duty of government, particularly in education is to ensure that they give every citizen the right to education, but if it is the contribution of the missionaries or the Christians to help give education to the generality of people, nobody will quarrel with that. But when you have mission schools that said they will not accept people of other religions,  that discrimination is what we believe is not right, so, when that is corrected and the schools are going to serve the general interest of the society, there is no problem in allowing missionaries to have their schools under education policies and guidance of the government of the day.

As a former member of the revival of Ajaokuta Steel Company and a stakeholder from the area, are you happy with the situation of things in the company?

I can’t be happy at all, those of us that are from the catchment area can’t be happy for many reasons. The amount of investment, the relevance of the industry giant in the industrial development of the state. There is nothing bad in Ajaokuta Steel, what is discovered was a lot of international politics, no government of the day has been able to display the political will to bring the company on board. The government of Alhaji Shehu Shagari, brought the company to 98 per cent completion before the powers that be stopped it, I believe that this country needs Ajaokuta Steel Company, I believe in the political will to realise it should be there so that we can become an industrial giant not only in Africa, but in the world. This is what was done in places like Brazil, India and South Africa, I don’t know why our own is different, the government should muster the political will to complete the project, I don’t think finance is the problem, once we have the political will, the money will come. Because of the interest I showed there I am aware that in Ukraine, the builders of the company is prepared to complete it and run it for a while and hand it over to Nigeria, but some people have been short changing the country.