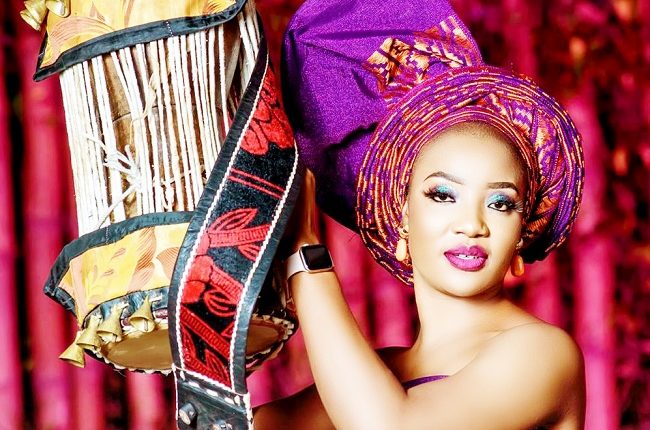 Princess Adejoke Somoye is an On Air  Personality, entrepreneur and the convener of Gbagede Ewaede Foundation. In this interview by YINKA OLUKOYA, she speaks about why she is passionate about promoting Yoruba culture and tradition. Excerpts:

Over the years, your name “Ewaede” has been associated with Yoruba cultural promotion and education, how did you venture into this?

I must attribute that to my father, who used to be a lover of African culture. While growing up, I had a smooth relationship with people who had vast knowledge of Yoruba culture, hence I got involved in cultural activities in Abeokuta and its environs; but later I realised that cultural heritage and values of our Yoruba nation was gradually going into extinction, especially the language which was not being taught in elementary and primary stages of schools. I am of the school of  thought that a group of people who do not value their culture can never value anything neither will they be valued anywhere they go to.

I realised that the language was so dynamic that even those from other tribes are of the opinion that Yoruba indigenes are distinct set of people who are elitist and more educated with an enviable way of life, but the real owners do not see any value in the language. I therefore took it upon myself to contribute my quota to protect the unique identity of our progenitors.

It’s even more surprising that there are people abroad, especially international students who often spend much to learn Yoruba language academic institutions, even to the extent of learning ifa in the ancient city of Oyo. This would make one  to begin to think of the uniqueness of the language which made them  decide to  come down to Nigeria to study it.

Can you highlight what has been your experience and factors that kept you going till date?

Growing up as a princess gave me unhindred access to numerous cultural events and issues, being a radio presenter gave me a platform to promote Yoruba language in addition to my increasing passion to strive at promoting anything that relates to Yoruba culture in spite  of no definite support from government. Although some few individuals around have been supportive and encouraging me.

What are the basic vision and mission of your foundation- Gbagede Ewaede?

The non-governmental organisation has been involved in the training and lecturing of kids about the culture of Yoruba in its entirety. Our main focus is to explore all educative and informative means to engage youths and kids understand the reasons for them to protect Yoruba culture now that it is being regarded as vernacular in some quarters – this does not define our language.

Our foundation goes to the extent of setting out basis for people to be proud of speaking the language and never feel inferior or be classified as star illiterates, neither does it reduce their values; so we encourage them to be proud ambassadors.

Also, we promote African culture via art including adire fabric making, tye and dye making, music of talking drums and weaving of aso-oke, all of these tell the youth that being from the Yoruba tribe gives you the platform to be unique and self-fufilled through creativity.

We equally project the aesthetics of Yoruba -its cultures, norms and tradition through an annual symposium where culture enthusiasts, linguists, historians, traditional rulers and academic dons, amongst others, often converge to dialogue on the way forward to preserve our language from going into extinction. The last edition featured Chief Dele Momodu who took time to diversify away from his daily calling of publishing and journalism to encourage participants to be proud ambassadors of the culture. In all our activities, the postulations of the Nobel laurtte, Prof Wole Soyinka often dwells in my hearts that anyone who never feels inferior to understand his or her language well, will have better understanding of other languages, especially English language which has now become the sudden pride of parents in the 21st century.

How do you get funds to organise events of this nature?

This gives me an opportunity to extend appreciation to few individuals who have been of assistance over the years as I can’t boast of definite sponsorship for our programmes.

It is heartbreaking that whenever the foundation approaches many corporate organisations for sponsorship, their responses are always demoralising as they will always enquire about what they stand to benefit spending their money on cultural promotion, forgetting that it is part of their Corporate Social Responsibility (CSR) to ensure the sustainability of the “Omoluabi” ethos, especially those companies situated in the South Western region. Instead of protecting the rich heritage, they rather find pleasure spending millions organising jamz and events promoting immoralities and fun  with no meaningful gain at the end of the show.

Well, the Ogun State Government has been supportive in a little way, through the provision of venue for the annual programme, although we are often mandated to cater for all logistics and services for the usage. Whenever I think of the burden of sponsorship, it often drops in my heart that the omoluabi traits we refuse to promote amongst our youth today will leave behavioural vacuum in the future. These traits will often remind them of who they are, their family background.and values and why the name must not be soiled in the mud by them through illicit behaviours.

What’s your assessment about efforts of stakeholders in the promotion of the Yoruba culture and heritage.

I am always furious to give my assessment as it’s always disappointing whenever you expect some positive actions from some set of people, especially royal fathers who are expected to be custodians of culture and they are not responding in the expected manners. Speaking in English language has now been the order of the day in traditional palaces even as royal fathers now derive pleasure in speak ing same in public functions, why?

A typical example is the low turnout of monarchs at the 2019 edition of our annual lecture. Could you believe a monarch who had previously gave his nod to attend the programme later boycotted the event for the launching of a bar.? It’s thought provoking that he neglected a gathering that set out to protect the tradition because the stool of every monarch should be used to promote our language. I think every Yoruba son and daughter in their respective capacities owes it a duty to protect the cultural values.

What’s your assessment on the teaching of Yoruba as part of educational curriculum, especially in schools situated in the South Western State?

At a time when everything about our language is being taken with levity, there was consideration for the removal of Yoruba language from the school curriculum. Such would not have been proposed at all if our elders, royal fathers and opinion leaders were firm in their actions to uphold our aged heritage; no stakeholder will try such with other tribes who go the extra miles to promote the teaching of their languages even in the elementary classes.

Our political stakeholders who do not treasure the language dare not communicate with the electorate at the rural areas during electioneering periods with the sophisticated english language; why then would they superitend over the policies of removing the language from being taught in schools?

In view of the above, what are your recommendations?

It is high time we went back to the roots to address the issue and engage all concerned stakeholders in the education sector of the South western state to ensure that Yoruba language is made compulsory up till secondary school level as it will be easy for students who often spend most of the day in the school to better learn and inculcate the language and its uniqueness. Parent should as well take complimentary steps by communicating with their kids with the language, while our kings should make the language a priority by making it compulsory for all activities in the palaces to be conducted in the language with a view to giving the deserved pride to our culture so that upcoming generations can emulate such.

Recently, you were one of the 100 recipients of the annual Royal African Young Leadership Award, an initiative of the Ooni of Ife, Oba Adeyeye Ogunwusi, how would you describe your nomination?

Aside the fact cultural promotion events have given me the opportunity to travel abroad to England, Brazil, South Africa, Trinidad and Tobago, my nomination for that royal award remains a dotting experience. It came as a suprise to me as one hardly saw anyone giving recognition or support in recent times. At first, I thought the notification call was a scam.

As an Egba born whose event and show have never gone beyond the shores of the city, I’m still thrilled by the loud ovation and honour bestowed on me during the event; hence I remain grateful to God and His Imperial Majesty, Oba Enitan Ogunwusi whose words of encouragement and admonition inspires my heart till date.

The fact that the high ranking monarch openly informed the audience that he personally beamed his searchlight to pick me for the conferment of the award with an assurance of his esteemed support to my mission of promoting Yoruba to any part of the globe gave me an insight that people seem to be watching my exploits even when I think no one did. No doubt, it came with additional duties and obligations of always being available to obey the clarion call of promoting Yoruba culture anyday, anywhere and any time without disappointing the prime monarch.

In spite of the huge investment in the water sector by the government and international organisations, water scarcity has grown to become a perennial nightmare for residents of Abeokuta, the Ogun State capital. This report x-rays the lives and experiences of residents in getting clean, potable and affordable water amidst the surge of COVID-19 cases in the state…Why I take it  Why I take it

The Lagos-Ibadan railway was inaugurated recently for a full paid operation by the Nigerian Railway Corporation after about a year of free test-run. Our reporter joined the train to and fro Lagos from Ibadan and tells his experience in this report…Why I take it  Why I take it

My song ‘Eko’ to celebrate Lagos as land of opportunities, prosperity — Jemiriye