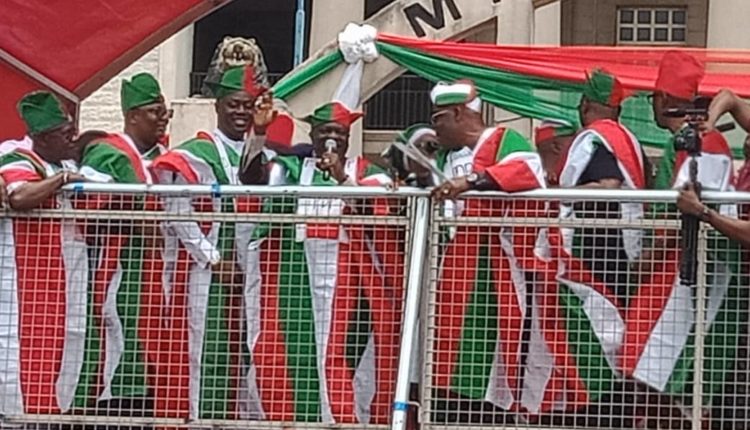 Former governor of Osun State, Chief Olagunsoye Oyinlola, on Wednesday, alongside other former members of the Peoples Democratic Party (PDP) and members of other political parties, joined the PDP at a South West unification rally held at Mapo Hall, Ibadan.

Adorning a PDP branded agbada, Oyinlola said his return to the PDP was informed by deceit and sectionalism in the All Progressives Congress (APC) led administration.

He said the deceit of the APC administration was seen in the party promising restructuring of the country in the run-up to the last general election only to later posit that the real definition of restructuring has to be clarified.

Oyinlola said sectionalism was epitomised in the occupation of positions hitherto occupied by Southerners with Northerners.

He gave particular instances of that of former Minister of Finance, Mrs Kemi Adeosun and former Director-General of the Nigerian Maritime Administration and Safety Agency (NIMASA), Dakuku Peterside as evidence that the President Muhammadu Buhari led administration favoured Northerners over Southerners.

Though Oyinlola had left the PDP for the APC and subsequently the African Democratic Congress (ADC), he said his affinity had always been with the PDP.

While thanking the PDP for accepting him back, Oyinlola said his return was the onset of a restructuring of the PDP in the South West.

He prayed that all the PDP had lost over time in the nation’s politics will return.