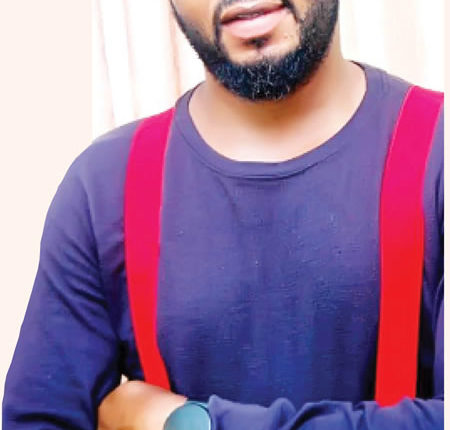 “When passion drives a man, he leaves certainty for uncertainty”. These were the words of actor and movie producer, Bimbo Sunday, who left his job as an officer with the Department of State Services (DSS) to pursue a full-time career in acting. The Ondo State-born actor in this interview by FEMI OGUNTAYO reveals why he left the DSS to follow his passion and also talks about his career. Excerpts:

You have been in the industry for a while now; would you recap how it all started for you?

I started acting at age 10; I started in the church then, Christ Apostolic Church (WOSEM). Thereafter, I joined the Osupa Ola Theatre group in the year 2007 in Igbokoda, Ilaje Local Government Area of Ondo State under the leadership of Oladeji Ikuolayole. To the glory of God, I started full-blown acting in 2017 when I resigned from my appointment from the Department of State Services (DSS).

How does it feel like resigning from the DSS to join the acting industry?

My political boss, former Governor Olusegun Mimiko once said and I quote: “I have prepared myself for all I will do as governor of Ondo State when I was first made Commissioner for Health”. So, the governor had the template of how he wanted to reshape Ondo State even before he became governor. So, I have prepared myself that it is going to be tough.

Since I have made that decision of making acting my career, then I have prepared my mind for any challenge but I left because of the passion I have for acting. My own definition of passion is leaving certainty for uncertainty because I knew it wasn’t going to be easy. When I was about to resign, my wife came to me and cried saying ‘what kind of madness is this? You want to leave a Federal Government job for something that is not certain?’ Then I asked her a question that you as a civil servant, are you so pessimistic that I wasn’t going to make it through acting?

She couldn’t say a word and I said that for the fact that God has provided us with our own house, we both have cars and I know for the next two to three years, it is not going to be easy, but I have prepared myself and when the challenges were coming, because I was already expecting, it makes it made it easy for me to face. I knew I was leaving a good job, I knew it wasn’t going to be easy, but I had to follow my passion. I had to follow what makes me happy. I can tell you for free, if I don’t act I can run mad. If I stay at home for a whole month without going to a movie location to shoot, which God has not allowed to happen, I can start acting somehow. I have seen acting as my joy and happiness. If I didn’t leave DSS, who knows, I might have become a nuisance in that profession by now.

What was growing up like for you? Tell us about your childhood and educational background?

I can say I am a born actor; my parents of blessed memory were actors – Mr and Mrs Sunday Adeyemi. I grew up in Ondo city, my mother was from Ondo town while my father was from Abeokuta in Ogun State. But I grew up in Ondo. I attended AnSar-ud-Deen Primary school in Yemonja Yaba, Ondo, I attended Ondo Boys High school, later I obtained ND in Mass Communication from The Polytechnic Ibadan, I had Bsc. in Criminology and Social Work from Adekunle Ajasin University, Akungba Akoko and to the glory of God, we are still learning.

When I was growing up, people saw the prospect in me, from the way I speak and narrate stories. Even when I was in primary school, people would gather to listen to me tell stories of movies I watched. Even when I was working with the DSS, I had many of my colleagues who would tell me I was just wasting my talents working with the DSS, because everything I said they would laugh, even my gesticulation made them laugh. So, growing up for me was very rough, my parents were average people but they were able to send us through school.

How would you describe the Nigerian movie industry? Do you think it’s an industry that can be taken as full time or like many say, one must have another side business aside acting?

It depends on which side the industry turns to you. The industry can make or mar you, which is why it is very important to have a side business. One thing I have noticed about the industry is that if you are so passionate about it, whatever you have at hand, the industry will take it away from you. I can say the movie industry is a very jealous industry that doesn’t want you to add any other thing to it. It is just like the DSS from where I resigned, if I was a police officer, I wouldn’t have resigned because the Police with the Police band and the likes are allowed to do entertainment. But the DSS is a secret service and everything about them is clandestine and they wouldn’t allow you to have other things distracting you, they want you to concentrate. The same thing applies to the movie industry. But for those saying you cannot take it full-time, yes you can. Just that when God is blessing you on the job, it will be very thoughtful of you to establish a side business entirely, which will back you up when you are growing old and you are no more agile to take roles that took you up there.

What are the recent movies you produced or featured in?

My maiden production was ‘Lawal’, after which I did ‘Ayewo Eje’ (Genotype), I did ‘Sibe Sibe’, Akowe Abule, and a soap opera – a comedy called ‘Owo Yale’. That ‘Owo Yale’ was my father’s stage name when he was alive, so to the glory of God, I have about four movies and one soap opera. I have also featured in so many movies that I cannot even remember all, but let me just mention some very recent ones. I just featured in ‘Eje Ibale’, ‘Onile’, ‘Intimate’ which is still showing on YouTube, ‘Morayo’, ‘Ipe’ and to the glory of God, a movie which is going to the cinemas by June 11, a movie that was selected for about five international film festivals, ‘The New Patriots’. I have featured in a lot of movies that I cannot even recount right now.

How did you get to feature in the movie ‘The New Patriots’ and what does featuring in such a movie mean to you?

‘The New Patriots’ is wonderful and a top-notch movie. Since I have been acting, it is the best movie I’ve featured in. How I got to feature in the movie; well I will say it is God. It has been orchestrated by God because the bible says no one receives anything except it is given by God. The producer is a father – Dr Rotimi Adelola, we worked together in government when he was SSG in Mimiko’s government, I am very grateful that he believed in me and brought me on board. He saw the potential in me when I featured in one of his previous movies and brought me on board. So, it was a wonderful movie and the reason I said it was the best is that it already got selected for five international film festivals and it is going to be released June 11. So, I am overwhelmed to have featured in the movie and it means a lot to me and I am grateful to the producer and to God almighty.

As passionate as you are about acting, was there a time when you felt so discouraged and felt like quitting acting?

When I said I was prepared for the challenges that would come on the job, discouragement was part of the challenges expected. So, I have been discouraged many times, especially when I relocated to Lagos. In Ondo State, I was a champion, but in Lagos, I felt like it was really happening. Lagos is the centre of all entertainment in Nigeria, in Africa, take it or leave it. So, I looked at it that what should I do? I have taken this acting career upon myself, no salary coming anymore, should I remain in Ondo State? So, I came to Lagos and so many directors who had seen me act before would call me without pay and just hail me and all that I felt so discouraged but I saw that as a challenge. So, with all the challenges or discouragement I have faced, I have never felt like quitting for once because a quitter never wins and a winner never quits.

Is there any embarrassing moment you have had on this job which you would like to share?

Well, if I must share one, I would say, sometime ago when a young director, who when he was even leaving his boss, I was part of the people that encouraged him like, yes you can stand on your own. So, he called and asked me to come for a movie shoot in Ibadan. I saw him like a younger brother who would respect the fact that he was bringing an elder brother to a project, so I didn’t even bother negotiating. I got there, he told me I was going to spend just one day, shoot just a few scenes and I would go back to Lagos. I couldn’t leave that day and had to stay till the following day. And when I was leaving he just gave me a token for my feeding and accommodation, I found that to be beyond embarrassing because it is not something that happens to me at this stage I am anymore. It had happened in the past, but that was when I was still struggling to be known.

What about your best moment?

That would be when I travelled out of the country to the United States – Maryland to be precise. The person who hosted me had taken me to an RCCG church and at the church, during the time they welcomed first-timers, the person who anchored the session recognised me and announced to the whole church that “we have a Nollywood actor among us”, I was first surprised because I never thought people knew me in the US. The man had to take me out after service, took me shopping and all that. It was an experience I will never forget in a hurry.