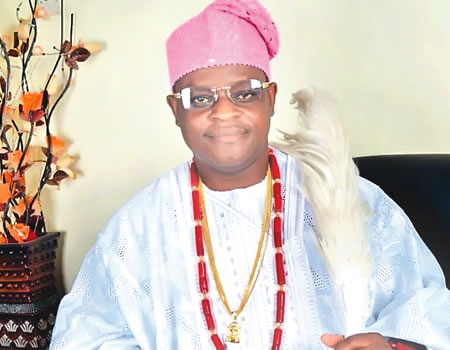 The new Onipokia of Ipokia Kingdom, Oba Yisa ‘Sola Adeniyi Olaniyan, in this interview by SEGUN KASALI, talks of his plans to reset Ipokia Community, the role of traditional rulers, among other issues.

What was life like, prior to your ascendance to the throne?

I was an entertainment promoter, based in the United States of America. I like being out there on weekends when I was off work, to hang out with friends, especially when I had a show.  I liked to spend time with my guys watching games or partying if there was one, though this was only on weekends, because I had a full- time job apart from promotion.

Now that you’ve been conferred with the royal title, how much of this past lifestyle is the throne likely to ‘consume’?

I think a lot would have to go; since royal stools in Yoruba land are sacred, and its obaship, a serious business. For instance, I can no longer go to the bar to watch games anymore or go to a movie house or cinema, as it’s called here. One’s dressing must also depict royalty. The days of jeans and T-shirts might be over. So, it’s a different ballgame now as regards my old lifestyles.

What is the history of Ipokia community?

The original founders of the town, Ipokia, were Yorubas, speaking Anago dialect.  The dialect is somewhat close to Awori dialect. Majority of the settlers migrated from a town called Opo-Bini, somewhere close to Ajase Ipo, Kwara State in the 16th century. It started with a disagreement between two brothers over their father’s throne. One of the brothers was selected to be the oba, and the second brother, named Adesamola wasn’t happy about it. So, he took the traditional crown and left in the company of some kingmakers who were in his support. They first settled at Erekiti around Badagry. Then they moved to Tukuru, where they crowned two kings who were referred to as Onitukuru 1 & 2. They had to leave again because the Ifa oracle told them they were yet to reach their destination. They finally settled at Ipokia and have been living here since then. Ipokia people were mostly farmers and hunters. But, nowadays, some of them have ventured into other different businesses as the community continues to grow.

Every community has its dos and don’ts, and I’m sure Ipokia cannot be an exemption.

Ipokia has its rules, traditions and taboos too.  Let me give you some, though there are others there that I still have to learn as time goes on. For instance, it’s a taboo to own a horse in Ipokia. It’s forbidden to sell maize/beans concoction  (adalu ewa).

What would you say are the challenges facing the community?

A lot of challenges, but I believe they are surmountable.  For instance, we don’t have any higher institution here, though we are hoping and praying that the new school that has been promised by the state governor will be established as soon as possible. We also lack good roads in this community, especially roads to Ipokia. We would need the state government to help us combat these challenges since we, as traditional rulers, cannot do much without government’s involvement. Another challenge is non-availability of employment opportunities.

We are appealing to the state government to help us, especially when Yewa as a whole is totally backward in terms of development.

What strategies are you deploying to tackle these challenges?

We plan to start consultation with our elders and community leaders. We plan to draw a blueprint and begin to work towards achieving and overcoming these challenges.

What should be the ideal role of the nation’s traditional leaders?

Traditional rulers should be that reliable link between their people and the government. Though we have elected officials and politicians who should be doing that, but they are elected. They have their tenures that expire after a period of time. But obaship is a lifetime. Traditional rulers are peace keepers, settling different disputes in their communities. And, of course, they must help bring development to their people by going out to look for such opportunities.

All is still not well within the rank and file of traditional rulers in the country, especially obas in Yoruba land.  What exactly do you think is the source of this disunity, and how can this be resolved?

It all boils down to unnecessary superiority and ego play, and that’s simply because Yoruba history is distorted, due to lack of reliable way of keeping records of event way back then. For example, some say that Oduduwa, the progenitor of  the Yoruba race came from Saudi Arabia. For me, that claim is still very difficult to believe till date because we should have a place to point to in Saudi Arabia to support such claim. So, that’s not a fact to me.