Why close borders on trade after signing a ‘Free Trade’ Agreement? 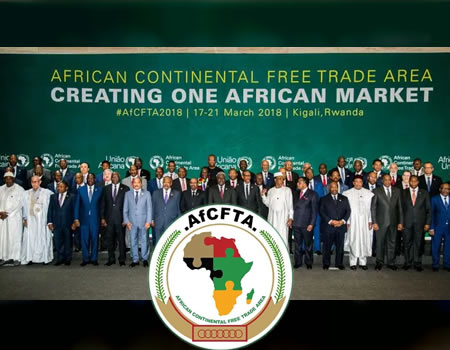 The Nigerian government has announced the closure of all its land borders to restrict the movement of certain goods. The consequence of this is explicit in the outcry of citizens and those in neighbouring countries.

However, earlier this July, prior to the closure, the government signed the African Continental Free Trade Agreement (AfCFTA ) which proposes the removal of tariffs on 90 per cent of the goods traded between the signatories to the agreement, and ensure free and convenient movement of goods across borders; Trading under the AfCFTA would start in July 2020. But Nigeria’s closure of its borders, however, iterates the country’s lack of commitment to the agreement.

The government justifies the border closure by arguing it is a necessity towards curbing smuggling activities and protecting local production of rice, the country’s most demanded staple food. Instead of helping the rice market, the closure is making life miserable for innocent Nigerians.

Unfortunately, the closing of borders to restrict the movement of goods may not be the best option to suppress smuggling across the border. Nigeria risks losing the enormous economic benefits that come with cross-border trade. More so, the Nigerian Customs Service and its sister agency, the Nigeria Immigration Service, are acutely ill-equipped as admitted by Retired Comptroller, Chime Nwachukwu.

In 2017, though, Nigeria revealed the Economic Recovery and Growth Plan aimed at deepening investments in agriculture and increase the sector’s contribution to economic growth. It improved from 5 per cent in 2017 to 8.4 per cent in 2020. The idea was to revive domestic farming and save on food imports, which costs the country over $22 billion annually.

Unfortunately, this did not miraculously improve agriculture. According to KPMG’s Rice Industry Review, the demand for rice in Nigeria reached 6.7 million tons and only 4 million tons are produced locally, less than 60 per cent.

Sheriffdeen Tella, an economics professor at the Olabisi Onabanjo University opined that it is better for a country like Nigeria to accelerate the production of quality rice and sell it cheaper than imported ones. This is, of course, a good policy alternative.

Significantly, the 2018 United Nations Conference on Trade and Development published a paper that argued the AfCFTA provides opportunities for sustainable development in African economies. It should also generate welfare gains of $16.1 billion, at the cost of $4.1 billion in trade revenue losses. The GDP and employment rate should also improve by 0.97 per cent and 1.17 respectively.

The UN Secretary-General on Trade and Development, Mukhisa Kituyi wrote in the World Economic Forum that the AfCFTA possesses the potential to bring the continent the development it longs. But to get the best out of the agreement, African leaders must show total commitment.

Free trade across is as important as establishing a convenient atmosphere for marketing. Closing borders would only create isolationism, which is bad for economic progress. Whereas, the free movement of goods creates a stronger inter-border economy.

Also, an alternative for the government to secure its borders from the illegal entrance, without jeopardizing the livelihood of its citizens, would be to equip its immigration officers. They are the first line of response and as such, they should enjoy the state’s best support. Protecting Nigerian interest must be done with the right policies.

• Abdullah Tijani is a Writing Fellow at African Liberty and Local Coordinator at Students For Liberty. He is a law student at the Usmanu Danfodiyo University, Sokoto, Nigeria.  He’s on Twitter @AbdullahAtijani.