Who wants to be a millionaire? 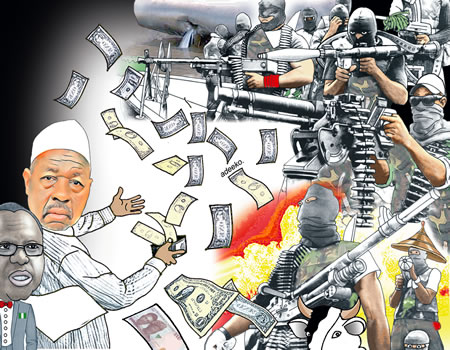 TWENTY-TWO years of democratic journey (1999-2021) has brought little dividends for the Nigerian burgeoning hoi-polloi who endures unemployment, battle poverty, die untimely in ill-equipped health infrastructure, train their children in grossly underfunded schools, and are governed by parasitic leadership. The value of what civil servants earned in 1999 was better than what they earn in 2021. These social problems are compounded by rising insecurity and intractable corruption. Some people now raise prayer warriors to ask the Supreme Being to grant them journey mercies as they dare to navigate the valley of death on Nigeria’s hellish roads—don’t blame them, even the Prince of Daura said only God can guard Nigeria’s borders. Politrickcians scammed Nigerians with promises that are jettisoned immediately after mounting the podium of power and authority. Millions/billions of naira from the common patrimony are then diverted for personal and familial uses. They have created a monstrous following currently fighting against the system that sidelined them.

The story is the same from parasitic leadership in the North who callously nurtures almajirai system but train their own children abroad to their photocopies in the South, who cannot provide free education, reduce unemployment or effectively protect their people from internal and external insecurities. The abandoned children, including their out-of-school comrades have now come of age and dominate the population of rising insurgent citizens. Through banditry, kidnapping and armed robbery and pilfering of commonwealth, the kingdom of Nigeria suffers violence and the violent are taking it by force. Join Politics and with a Degree Certificate in Forest Banditry and Highway Kidnapping, you are on your way to becoming a millionaire with opportunity to speak and dine with the shakers and movers of Nigeria. Indeed, a Diploma Certificate in Mass Kidnapping skill is an added advantage in 2021 Nigeria.

Popular Television show, who wants to be a millionaire metaphorically approximate the state of affairs in post-colonial Nigeria where people leverage on their intellectual prowess to answer questions as they move up the ladder of monetary reward from few thousands to guaranteed sums of money. Poorly managed or unanswered questions could cause major loss from N500,000 to N250,000. Just like real life situation, participants are provided with lifelines: they can call a friend, ask the computer to retain one right and one wrong answer, and they may decide to walk away with the sum of money they have won. Crime script analysis shows that kidnapping and banditry are scripted shows just like it is in becoming Governor, Senator, or President. Through hiring of thugs and unleashing of violence and millions of naira, politrickcians emerge flag bearers. After comparing and rating themselves with their opponents on a scale of fifty-fifty, they ruthlessly affirm themselves as next office occupier. To achieve this, they need to ‘call a friend’ to assist with the realisation of their political goal. It is immaterial if this needed friend is a thug, a corrupt person, warlord or more. What is important is how useful the evil friend will contribute to his/her enthronement. They canvass people across divides, lure people to their side, and collectively rape people of their mandate through violence. After mounting the podium through violent instrumentality, they are called “his Excellency”, “honourable”, “distinguished Senator”, ‘Honourable Chairman’ and ‘Powerful Special Advisers’ among others. Now on the other side, they want to push aside those who enthroned them. Their allies are now working for them to get amnesty or possibly a Federal Ministry of Forest Bandits Commission. In other words, banditry is being pushed to enjoy federal character or is it quota system? Nigeria is treading on a dangerous path if ‘Gumism’ (a pleading that unmerited amnesty should be given to armed Fulani bandits occupying Forests and bearing weapons of war to kill, rape and kidnap in exchange for millions of naira) is allowed to flourish. Criminal gangs across the country will occupy their own forest area, kidnap; rape and make millions while people preaching Gumism will plead the State to grant them amnesty.

Who wants to be a millionaire therefore deconstructs the process through which social support is employed for positive outcomes on the show to make millions. Just as it is on who wants to be a millionaire show, kidnappers abducts their victims, profile them to knowing their network of relations to know the amount of money to demand as ransom. Thinking of survival, the captives think of where help would come from and call a person within his/her network to negotiate and raise money for him/her to be able to ‘walk away’ alive. Everyone concerned begins to struggle to raise the money. They also think of whether to inform the police or not having been warned not to do so by the kidnappers if they are interested in seeing their loved one alive. Calling a wrong person who does not have solution may be costly to the live of the person in captivity. Any wrong move could result in death and this is why most trusted persons are contacted to help during this period. Those who pay ransom on time and cooperate with bandits/kidnappers, get to walk away alive. Sadly, those who try to prove smart, gets the corpse of their loved ones.

Nigerians have been kidnapped by politrickcians who promised change and next level but unleashed poor economy, ethnic disunity and insecurity. Ongoing experiences of insecurity and dashed hopes are enough to spur Nigerians to rewrite their own history and reject hushpuppic politrickcians in 2023. To sum up, who wants to be a millionaire presents the sad state in Nigeria where violence rules and the violent is rewarded while the law-abiding people are terrorised by the State. When the state stifles law-abiding citizens and slams them behind bars, the message being sent is that there is reward for violence. When governments that cannot provide funding to revitalise public primary and secondary schools as well as universities, spends money to train terrorists abroad, the message to those going to school is that they are missing their way to making cool millions in criminal world. We need to encourage and incentivise lawful behaviour and punish criminals. The possibility of becoming a millionaire should be open to all lawful citizens and should not be a reward for negative deviants.

Ethnic profiling is not the problem

Enny Okosun wins TGMEA awards in US, thanks fans

The unwinning war? The Parliament invitation to the Nigerian Army