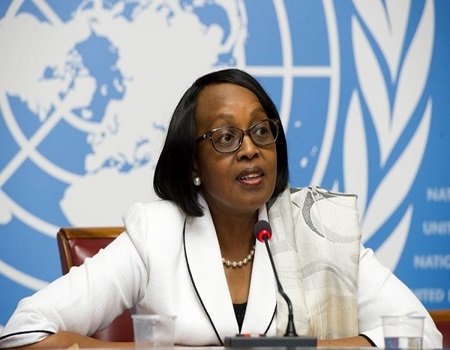 Africa is facing a surge in the third wave of the COVID-19 pandemic, says Dr Matshidiso Moeti.

Moeti, World Health Organisation (WHO) Regional Director for Africa, spoke on Thursday during an online news briefing on the 3rd wave of COVID-19 in Africa and monitored by the News Agency of Nigeria (NAN)

She said the surge is spreading more rapidly and projected to soon overtake the peak of the second wave the continent witnessed at the start of 2021.

NAN reports that COVID-19 cases have risen for five consecutive weeks since the onset of the third wave on May 3.

At the current rate of infections, the ongoing surge is set to surpass the previous one by early July, as the pandemic is resurging in 12 African countries.

Moeti noted that a combination of factors, including weak observance of public health measures, increased social interaction and movement as well as the spread of variants are powering the new surge.

According to her, in the Democratic Republic of the Congo and Uganda that are experiencing COVID-19 resurgence, the Delta variant has been detected in most samples sequenced in the past month.

She noted that across Africa, the variant — first identified in India — has been reported in 14 countries.

“The third wave is picking up speed, spreading faster, hitting harder. With rapidly rising case numbers and increasing reports of serious illness, the latest surge threatens to be Africa’s worst yet.

“Africa can still blunt the impact of these fast-rising infections, but the window of opportunity is closing. Everyone everywhere can do their bit by taking precautions to prevent transmission,” Moeti said.

She said WHO is deploying more experts to some of the worst-affected countries, including Uganda and Zambia as well as supporting South Africa-based regional laboratories to monitor variants of concern.

The WHO Regional Director for Africa said the global body is also boosting innovative technological support to other laboratories in the region without sequencing capacities to better monitor the evolution of the virus.

“In the next six months, WHO is aiming for an eight- to ten-fold increase in the samples sequenced each month in Southern African countries. The COVID-19 upsurge comes as the vaccine supply crunch persists.

“Eighteen African countries have used over 80 per cent of their COVAX vaccine supplies, with eight having exhausted their stocks.

“Twenty-nine countries have administered over 50 per cent of their supplies. Despite the progress, just over 1 per cent of Africa’s population has been fully vaccinated.

“Globally, around 2.7 billion doses administered, of which just under 1.5 per cent have been administered in the continent,” she said.

Moeti explained that as many high-income countries vaccinate a significant proportion of their populations, proof of vaccination is leading to fewer movement restrictions.

She added that globally, 16 countries are waiving quarantine for those with a vaccination certificate.

“Measures to prevent COVID-19 transmission are crucial, but with many African countries having limited access to vaccines, it is important that vaccines be only one of the conditions countries use to open borders and increase freedom of movement.

“With high vaccination rates, it’s shaping up into a summer of freedom, family and fun for millions of people in richer countries. This is understandable and we all long for the same joys.

“Vaccine shortages are already prolonging the pain of COVID-19 in Africa. Let’s not add injury to injustice.

“Africans must not face more restrictions because they are unable to access vaccines that are only available elsewhere.

I urge all regional and national regulatory agencies to recognize all the vaccines Emergency Use listed by WHO,” Moeti said.