Who is in charge Nigerian ports? 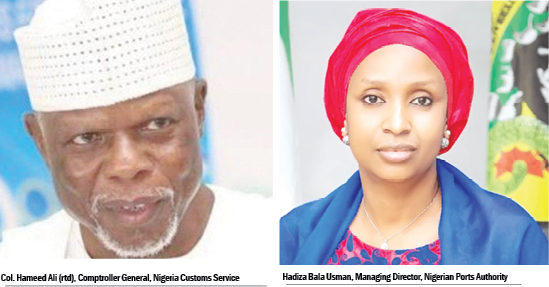 In recent times, different government policies formulated to improve Nigerian ports system have failed to be implemented due to different government agencies working at cross-purposes towards implementing different roles which at times, could be conflicting. In this report, TOLA ADENUBI examines why the trend has persisted.

IN 2017, while serving as Acting President, Vice President Yemi Osinbajo signed an Executive Order on the promotion of transparency and efficiency in the business environment and directed the resumption of 24-hour operations at the nation’s busiest port, the Apapa port.

Like other government policies before and after that Executive Order, the 24-Hour port operation failed to be implemented because inside Nigeria’s ports, government agencies operate at conflicting purposes due to supervision from different ministries and departments.

A hapless Managing Director of the Nigerian Ports Authority (NPA), Hadiza Bala-Usman, while featuring on a television programme recently had lamented that despite the flouting of many sections of the Executive Order by these government agencies, no sanctions had been meted out to errant saboteurs.

According to the NPA MD, “If you recall there is an Executive Order that was signed by the Vice-President, which directed all agencies of government to conduct inspection (of containers) in one location and that executive order was signed in 2017.

“Certain agencies of government have not complied and one of the things we have said is sanction for non-compliance to an executive order that was released by the Presidency cannot be done by the Nigerian Ports Authority.

“If an agency of government violates an executive order signed by the Vice President, the Presidency should sanction that agency for non-compliance.”

She said the essence of all agencies doing inspection in one location was for consignees not to have multiple areas of inspection.

She added: “There is an executive order to that extent. Some agencies have not complied. There have been several explanations and justifications for the non-compliance by these agencies. The NPA has raised it to the Presidential Council on Ease of Doing Business chaired by the VP to ensure sanctioning for non-compliance and as I keep saying if a directive is given and agencies don’t comply, if there are no consequences for action and inaction, that means I have not performed.

She thereafter urged the Federal Government to hold agencies not complying with the Presidential directive liable.

With different regulatory directive guiding major government agencies operating inside Nigerian ports system, the current efforts by the NPA to implement an E-call-up system that will address the unnecessary cluster of trucks and tankers along the ports access roads looks threatened, Nigerian Tribune can reliably confirm.

Findings by the Nigerian Tribune revealed that because many of these government agencies receive directive from different ministries and Departments, many more efforts to sanitize or improve the nation’s ports will remain un-implemented.

Speaking on the development, a clearing agent and chairman of the Save Nigeria Freight Forwarders Importers and Exporters Coalition, Chief Chukwu Osita Patrick explained that a major reason why there is no 24-hour port operation at the ports despite the Presidential Executive Order mandating such is because some government agencies don’t work weekends and close for work in the evening.

In the words of Chief Chukwu Osita, “Yes, there was a presidential directive that our ports should operate on a 24-hour basis. That directive was an Executive Order signed by Vice President Osinbajo when he was acting as President in 2017. The directive failed to hold because some government agency officials will have to close for work in the evening and don’t come to the ports weekends.

“For example, If there are no Customs officers on ground on a 24-hour basis, then the 24-hour port operation directive cannot hold because cargoes won’t be examined. A major role of Customs at the ports is to examine all import and export cargoes. During cargo examination, Customs is usually the lead agency. So if the Customs officers have closed for work in the evening or are not available at weekends, how do you expect us to have 24-hours port operations?

With the NPA bent on restoring sanity along the ports access roads through the implementation of an E-call-up system called Eto, activities of some other government agencies are already threatening to ensure the efforts fail like others in recent past.

Recall that despite its early gains, the E-Call-up system stuttered three weeks after commencement when over 600 trucks besieged the ports access roads, thereby making a mess of the NPA-Lagos State Government-led initiative.

However, for some residents in Apapa, the failure of the E-Call-up has been due to activities of some officials of some other government agencies aside the NPA.

Addressing newsmen earlier in the week, Apapa residents under the aegis of Apapa Landlords Association accused officers of the NCS and the road contractor (contracted by the Federal Ministry of Works) handling the Apapa-Oshodi express way, Hitech Construction Company of frustrating the NPA e-call up system that is meant to check the indiscriminate parking of trucks along the ports access roads.

The landlords said that in front of Area B,  Customs officers were stopping trailers to check goods that had already exited the ports, thereby causing a lot of gridlock along that stretch of the ports access road while Hitech, the road contractor was also causing havoc by deliberately blocking the inward Tin-Can stretch of the port access roads with its heavy duty equipment.

The Chairman of the Apapa Landlords Association, Prince Aderemi Olikuntuiyi, said that the persistent traffic congestion in Apapa and environs had wrecked their businesses and denied them of good and better lives.

He said Customs officers were compounding the menace by creating unnecessary traffic jam for vehicles that had been cleared and had exited the ports. He explained that Customs were not supposed to be checking vehicles that had duly been checked and cleared inside the port along the roads.

“That is what they do to us all the time and the worst happened when they brought out somebody out of his car and shot the person. We are not even safe. God forbid, if we are going out with our cars and they stop us and they suspected that maybe the car must have been a smuggled car, they can shoot us,” he lamented.

On Hitech, the contractor handling the repair of the Apapa-Oshodi express way, Olikuntuiyi explained that, “Apapa has become endemic and we are not too happy. As you know, the road to Apapa and Tin-Can is being blocked by the road contractor, Hitech, all in the name of repairing the road. The annoying thing is that, in the night, they will open all the blockade and start collect money from trucks.”

“However, during the day, they won’t provide alternative means for vehicles to pass.”

He said that the first day the e-call up system was announced by the NPA, the road contractor blocked the accessible road at Flour mills.