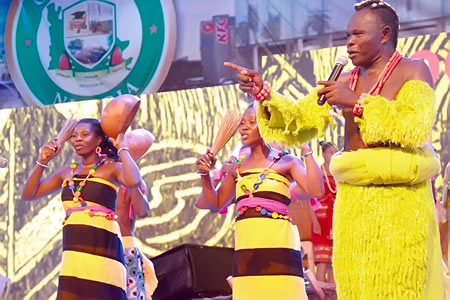 The annual African drum festival was held in Abeokuta, Ogun State, recently with all the trappings of a world-class festival. Friday Treat presents excerpts from the event and how Trophy lager beer, one of the major sponsors of the event, made it extra special.

The 10,000 capacity of Amphitheatre in Okelewo, Abeokuta, Ogun State, venue for the African Drum Festival is filled to capacity and those in the overflow jostle to have a glimpse of the action taking place on the stage. The stage is glamorous, lit up magnificently and has three other mini platforms from which the drummers can perform. The stage also had two large screens from which the audience received additional information on the performers introduced by the masters of ceremony who were smartly dressed in white and ash native attires.

The African Drum Festival is an initiative of the of Ogun State government and had been an annual event since 2016, when it first held in the state. Originally dubbed as the Nigerian drum festival, it has quickly metamorphosed to the African drums festival because of the reception and participation it received from other African countries like Benin Republic, Ivory Coast, Uganda, DR Congo and a host of others.

This year’s theme was ‘Drumming the Future’ and it was premised on the potential socio-economic contribution of drumming to the future of Africa. Senator Ibikunle Amosun, Governor,  Ogun State and the convener of the festival said that for development to be meaningful, the potentialities of culture to spur social and economic emancipation and empowerment of the people must be emphasised. 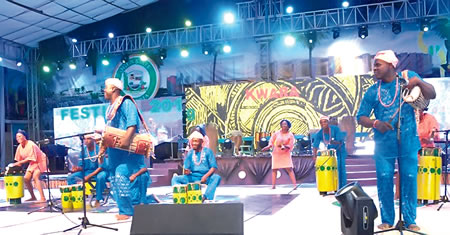 The festival celebration received sponsorships in different forms from corporate bodies and one of such was the sponsorship from the International Breweries via one of its brand, Trophy. Trophy Lager, popularly referred to as the pride of the South-West and widely accepted as the ‘Honourable’ beer, remains deeply rooted in the region’s socio-cultural values, which most likely, explained its sponsorship of the event.

Legal and Corporate Affairs Director, International Breweries, Otunba Michael Daramola, remarked that, “the African drum festival is a cultural showpiece which demonstrates our uniqueness, attributes, our rich culture and tradition of the black people. Trophy is a beer that is closely linked with culture and a brand that believes in celebrating life and always rising to the occasion to make connections and bring people together. We are so honoured to be part of this international epoch-making event”, he added.

The Egbedere band, comprising young boys and girls with an average age of 12, set the ball rolling at the concert. They were smartly dressed for the occasion and did not disappoint the audience with their drums and xylophone, via which they gave scintillating sounds which drew intermittent applause from the crowd. The highpoint of their performance was the rendition of a cover of Teni the Entertainer’s hit song ‘Case’. While the band played, the song’s chorus reverberated from the audience as they sang “My papa no be Dangote or Adeleke but we go dey okay yeah”.

The performance of Moyo Black troupe of Ivory Coast was exceptional. The beats they produced were so good that the crowd sang songs that rhymed with the beats. Showing the crowd their superb knowledge of Nigerian music, they played Fela’s evergreen song, ‘Lady’. They achieved this feat by combining the beats of drums with a Saxophone. The audience appreciated their efforts by singing along the refrain “She go say I be lady oh”. 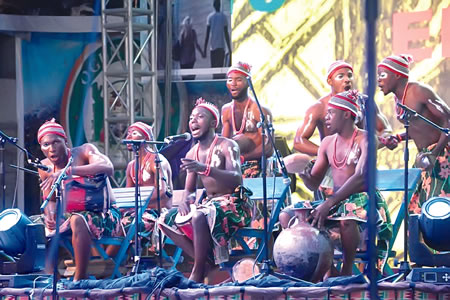 The Anambra State troupe came prepared for the event as they got dignitaries, who graced the event, dancing. Notably, Sally Mbanefo, a former Director General of Nigeria Tourism Development Corporation (NTDC) danced with so much that she got an ovation from the audience. With the help of two dancers and local flute players, their performance left many in awe.

As part its sponsorship, Trophy organised a music concert which was headlined by two music greats, Pasuma and 9ice, whose genres resonate with the culture of the Ogun people. Pasuma reeled out his hit songs to the audience who danced and sang along at the same time. In no particular order, he sang songs from different albums. Showing his dexterity in churning out music, he sang a medley in honour of Trophy on stage. Using the unique qualities of Trophy lager, he produced an exciting medley making the crowd rumble and call out his name at intervals.  The highpoint of his performance was when he asked members of the audience questions about the beer and rewarded those who got answers right with cash gifts.

The audience gave a loud roar when they heard the word ‘Ile’timo’ knowing 9ice was next on stage. Ile’timo is part of the intro of Street Credibility his hit song in  which he featured 2face.

His performance was filled with energy as he took the audience through memory lane with hits from his first and second album. Songs like Party rider, Gonga Aso, Gbamu Gbamu, No be mistake, Photocopy and among others, got the audience dancing long into the night while having refreshing cold bottles of Trophy lager. 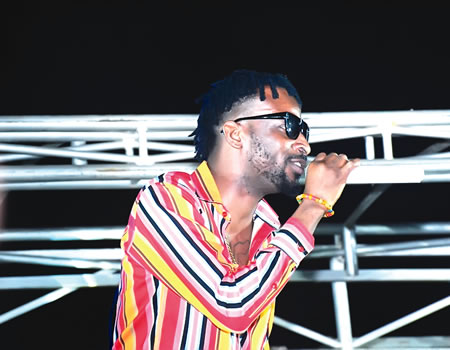 Tolulope Adedeji, Marketing Director, International Breweries believes that the African Drum Festival is an exceptional opportunity for Trophy to connect with consumers. “We decided to partner with the state government to help it exceed the successes recorded the previous year and from the turnout this year that objective was achieved. Those who came in for the drumming performances at the Amphitheatre have been given musical satisfaction. We initiated this concert within the festival to give the fun loving attendees a double dose of excitement and a memorable event that is associated with only Trophy” She said.

Indeed, the 2019 edition of the African Drum Festival was a spectacle to behold. As the audience left the Amphitheatre, many were seen discussing whether they could endure another 12 months before witnessing another mind blowing festival performances.