When Oyo govt, UP Plc renewed partnership to make books accessible for all 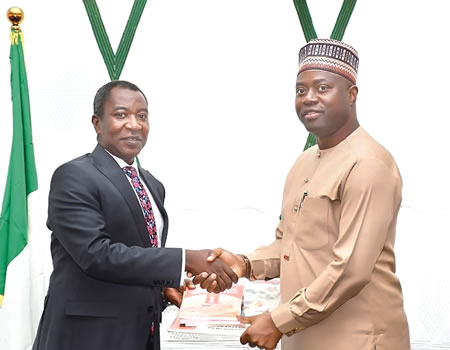 FOR several years, the University Press Plc had been donating books to the Oyo State government for onward distribution to pupils and students in primary and secondary schools in the state.

However, with the coming on board of a new administration in the state, there was the need for the publishing firm to familiarise itself with the new government and restate its commitment to its Corporate Social Responsibility (CSR), which is aimed at contributing its quota to the development of the education sector in the state.

Therefore, last Friday, members of the board and management of the company met with the state government, under the leadership of Governor Seyi Makinde, at the Government House, Agodi, Ibadan.

Speaking at the parley, the managing director of UP Plc, Mr Samuel Kolawole, went down memory lane about the transformation of the company from Oxford University Press to the University Press (UP) Plc.

Mr Kolawole said: “We celebrated our 70th anniversary last year and over the years, we have been giving back to the society, especially to our host state, Oyo State.

“We are doing this because the state government has made the environment conducive for us to conduct our business and we are thriving here.

“We must also not forget that Ibadan is the publishing capital of the country, and that says something about the government’s relationship with the publishing sector.

“We have been donating some books over the years to the state government for onward distribution to pupils and students of primary and secondary schools and libraries in the state, but because we have a new government on board, we decided to come to familiarise ourselves with the new government.

“The fact that the state governor, Engineer Seyi Makinde, decided to personally receive us is a testament to how he holds the education sector and we are glad for this.

“We also had to increase the number of books we are donating when we realised that the governor will be receiving the books himself.

“The total number of books donated is 3,376 and their monetary value is N2,815,375, and we hope they will be put to good use. We want the books to be distributed to schools’ libraries as well.

“We will also be donating our publications to the Oyo State library so that more people can have access to them.”

Mr Kolawole thanked the state’s Commissioner for Education and the State Universal Basic Education Board (SUBEB) chairman for their open-door policy.

The managing director also thanked the state government for the role it played during the burial of its immediate past chairman, Dr Lalekan Are.

In his remarks on the occasion, Governor Makinde thanked the publishing firm for the gesture, saying education is one of the major focus for this administration.

“In fact, our budget for education is 22 per cent. That shows the importance we attach to education.

“Before we came on board, we were number 26 in WAEC standing; but with our intervention, we hope the state will do better when the results are released.

“We appreciate your support and I want to say that our officials will always be ready for more collaboration with you,” Governor Makinde said.

A slippery road for the female gender