When JDPC waded into farmers, herders’ clashes in Oyo 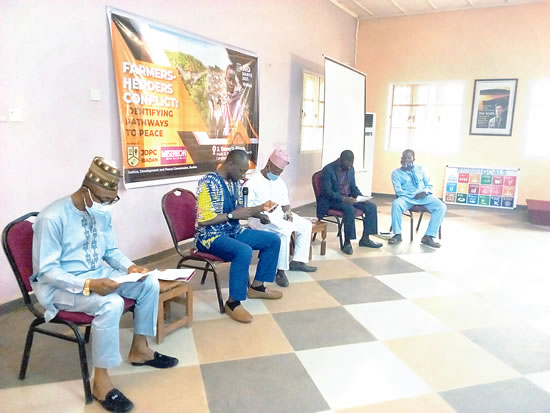 The clashes between farmers and herders over land across the country have resulted in several loss of lives and properties, and there is no sign that such needless violence would abate soon, especially with the coming rainy season.

While farmers will move to plant crops during the rainy season, herders will take their cattle to feed on pastures, and in some cases, mistakenly or intentionally, moving into farms, where crops are destroyed.

However, in order to contribute its quota to bringing about peace between farmers and herders in Oyo State, the Justice, Development and Peace Commission (JDPC) of the Catholic Archdiocese of Ibadan, in collaboration with Misereor, a foreign humanitarian organisation, invited farmers and herders to a round-table discussion to find ways through which the misunderstanding between them could be solved.

While farmers from the Oke-Ogun zone were available for the parley, representatives of herders were not available. However, that didn’t stop the robust discussion on how lasting peace could be achieved between the two groups.

In his opening remarks during the event, moderated by a social commentator and analyst, Michael Olatunbosun, the director of JDPC, Reverend Father Ezekiel Ade Owoeye, lamented the pointless clashes between farmers and herders, especially with its attendant loss of lives and source of livelihood.

Reverend Father Owoeye said, “what we are concerned about here is how to revert to the status quo, where people of different culture and religion can cohabit amicably without trampling on the fundamental human rights of the other.

“This peaceful coexistence is a possibility if we are open, honest, reasonable and sincere, and we want to use this opportunity to appeal to our security agents to live up to their responsibilities of protection of lives and properties.”

In his opening submission, the lawmaker representing Ibarapa North/Central in the Oyo State House of Assembly, Honourable Peter Gbadegesin Ojedokun, said people should not define the clashes between farmers and herders based on tribe, adding that there are Yoruba, Igbo and Hausa farmers.

“So we should not see it as a Yoruba and Fulani thing; some herders also move the cattle belonging to Yoruba businessmen, so this is beyond tribe. However, there have been complaints that herders take their cattle to destroy people’s farms, and when they are challenged, they are often attacked, either maimed or killed.

“It is because of this that we came up with the anti-open grazing bill at the state House of Assembly.”

While also speaking, the chairman on security committee in the House of Assembly, Honourable Obadara Akeem, blamed the rising insecurity, especially in Ibarapa and Oke-Ogun regions on the influx of foreign herders.

He said: “The majority of the Fulani who are living with us are not troublesome, but those who entered through our porous borders with neighbouring countries are the ones giving us problem. We now have a law against open-grazing and when it is implemented to the letter, we will solve a lot of the problems between farmers and herders.”

The secretary of Ibarapa Farmers Association, Mr Adeagbo Taiwo, who spoke on behalf of farmers, said “farmers are not fighting anybody, we just want to be able to go to our farms with peace of mind.

“Whenever cows destroy our farms and we challenge them, we are usually attacked; many farmers have been killed, while our women and girls have been raped by herdsmen, It has got to a situation whereby we are even afraid to go to our farms for fear of being killed.”

The farmers’ secretary also blamed the nonchalant attitude of the police on their plight, alleging that whenever they take reports of destruction of farmlands to them, they do not take any serious step to deter future occurrence.

In her closing remarks, the head of the programmer, Mrs Bolanle Olorode, said subsequent parleys would involve the police, while representatives of herders would also be compelled to come and state their side of the story.

She said the effort of JDPC was to bring about peace in the state, because is the only way through which economic activities could thrive.

Why the humanities still matter