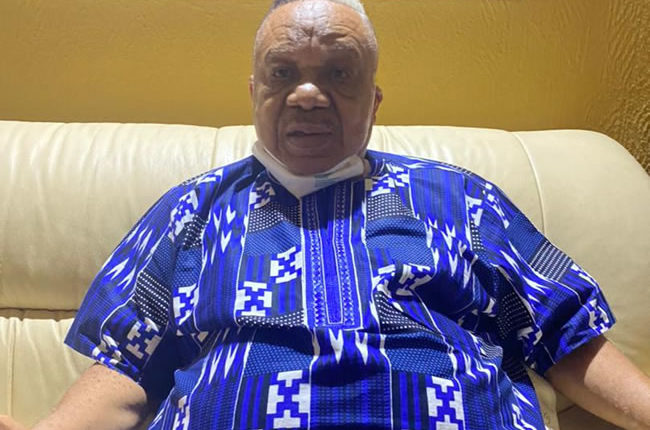 Apostle Dave Oladapo Salako, a former member, Federal House of Representatives, who represented Iperu between 2003 and 2011, is the Founder, Cherubim and Seraphim (C&S) Unification Church. He speaks on his growing up, in this interview with SEGUN KASALI. Excerpts:

With where you are today, you surely have many things to be grateful for.

So many things. I can’t pinpoint one. But for longevity, I really give thanks to God. Out of about 32 or 33 of us in primary school then, we are just 2 (two) now, who are still around. That is the grace of God. Recently, I was called upon by my Alma mata, Salvation, Army School- to come and receive an Award because the school realised that I did something for them while I was in the National Assembly. So, they thought I deserved that award but I could not go. So, one of my classmates who went called and asked why I did not come. So, I told him to receive the award on my behalf. When he came and brought the award, we reminiscent -he said this one is dead, that one is dead. We could not pinpoint one or two more apart from me and him who are still alive. So, for that singular one, I give grace to God. There is no one without his own. I lost my wife but I won’t lose faith in God because of that.

You stopped socialising for a good one year to mourn your wife.

Yeah. I socialise a lot. But, for the past one year, I have not. When I lost my wife on August 9, the whole family decided we should go into hibernation for one year and it just expired on Monday. You would not have seen me at any function or party for one year. You can go and find out- I am a socialite, I moved around a lot. I go to parties and enjoy myself.

Your late wife, including friends,  propelled you into studying law at the university.

You are very correct. They chastised us and called us laymen while they called themselves learned colleagues. So, it looked as if you are not learned if you are not a lawyer, even if you have a PhD in other areas. So, I thought what is so special about this profession that warrants the ascription ‘learned colleagues’? So, that is the major reason I went to study Law at the University of Lagos.

So, you never thought you would become a lawyer as a young lad.

No. While growing up, I wanted to become a pilot because each time I saw an aircraft I assumed someone is in control. So, I had always dreamt i would fly a plane someday. And here we are  Maybe I was not too qualified to get to that position. But, I recall that when I left primary school, I was lucky enough to get a scholarship from a body then. So, they sponsored my education all through to A Level. I never took second position in my primary school. The records are there and that was achieved because of the way my mum and dad disciplined me by making sure that I read my books. If you were told to do something and you did not do it, you would be cained for it.

Your dad must have been the disciplinarian.

Hmmm! Both of them were. At that time, if I did anything wrong, my dad would flog me and I would run to my mum. But, she would flog me too. So, I had no where to run to. So, both of them are disciplinarians. But, I love my mum more.

Yeah. The reason was my dad was too harsh. And I think that is in the Salako’s family, because we are very tough. But, I was not as brilliant as I was in the primary school when I got to the university. You know you have many friends in the university and you would want to think you are an adult. So, you have so many friends, bad and good ones. So, by the time you know that you are not serious, results would have shown that you weren’t.

Was the unseriousness borne out of partying?

What was in vogue during that time, Sir?

When chubby checker was everywhere then, we had this special shoe, a high heel like a boot. Before you could get that shoe, you had to be very rich. But I acquired one and I was on it for almost two or three years. I was named chubby checker in the school (laughs).  I was and still a very good dresser. If you ask my classmates in secondary school , particularly, they would tell you I dressed very well.

That is another story for another day (laughs). I think so. Till now, I think I am still attracted to them.

You ventured into politics having worked for 15 years.

I was enticed into politics due to the good virtues of the late sage, Chief Obafemi Awolowo. He made us became whatever we are today through free quality education. He was an outstanding politician in Western Nigeria and the country as a whole because he made good his promises as I could remember. As young as I was then, I could remember some of the promises he made when he came to campaign for us then. I thank God I won every election that I contested and got elected in 2003 when Baba Obasanjo was the president.

What do you have to say about Chief Olusegun Obasanjo?

Baba Obasanjo is another role model of mine. He can be harsh but at the end of the day, you would find out that he is an upright man.

You also know the current governor of Ogun State very well. What is that thing people don’t know about him?

He is a gentleman. And he is never in a rush. He believes in God. If you think Dapo has not got his own mind, you are mistaken. He is not someone you can push around. Whatever you think he has not done right, you would discover that he has done it best.

What would you love to be remembered for?

I want to be remembered as someone who is kind and that anything anybody wants from me, I tried to do.

Soothsayers said I won’t live to be 40, but here I am at 80 —Olubukanla Okusanya

As an economist, accountant, i’m well equipped to do my business —Obasa, Biomedical…