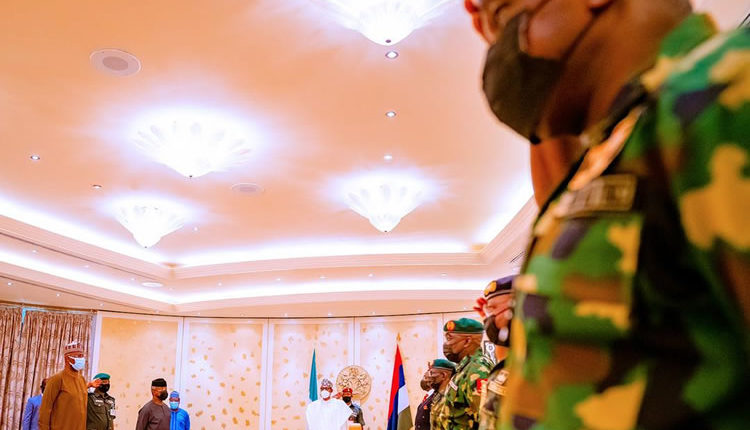 Certainly, a good number of Nigerians look to the place and role of the Vice President at every meeting of the National Security Council especially at a time when the country is undergoing security-related challenges and  Prof Yemi Osinbajo is known for some outstanding views on the subject including his call for State Police as one of the major reforms necessary.

Also another of his well-stated ideas on how best to tackle criminality in Nigeria, is the concept of community policing, a stance for which the  Vice-President has also always been very well known. While the President always retains the power and authority to make things happen, it is the voice of a VP that can be used to fairly and realistically assess and judge him.

And so, when the professor of law attended a security meeting presided over by President Muhammadu Buhari in Aso Villa on Tuesday, Nigerians may have already known what to expect from the respectable vice-president. This is because his voice has not been quiet on security-related matters lately.

The vice-president is known as a strong voice for justice, effective law enforcement, equity community policing and state police inside and outside government.

So I think it’s a good guess that the law professor turned Pastor and now VP would be pushing such ideas in the Security meetings including the one today. And if the stridency with which he advocates his views on Security publicly is anything to go by, my guess is that his voice won’t be less loud in this close door meetings.

At various times, Osinbajo had called for decentralised policing to tackle internal security threats and to secure lives and properties in the country as it has become apparent that the security agencies in the country are over-stretched and under-equipped, under-staffed and most times, don’t have the adequate understanding of the terrain they are posted to.

But with community policing, locals are in charge of their domains, they know the nooks and crannies of their localities and they can easily identify strangers and intruders in their midst. These responsiveness, swiftness and effectiveness as well as many more, have been some of the reasons why the vice-president has always pushed for community policing.

Recently at a convocation lecture at the maiden convocation of the Sokoto State University, Sokoto, on March 12 2021, the vice-president said, “It is also clear, that our centralised model of policing, which was entrenched when the country was less populous and less complex is not capable of addressing the challenges of a 21st-century society in the throes of fast-paced changes.

“The time has come to evolve a decentralised policing model that will operate along State and local lines. I believe that there is an emerging consensus on this issue.

“There are a number of proposals for the establishment of State Police entities before the National Assembly. The Nigeria Police Force has also commenced the implementation of its community policing programme. Taken together these initiatives indicate a growing realisation that policing and security management should be more localised and entirely centred around the public safety needs of our communities.”

“This is a big country, so policing is very difficult. There is a need for us to reorganize our security architecture, which is what is going on now.

“Nigeria is able to overcome the current security challenges confronting the nation and this is why the Federal Government is reorganizing the entire security architecture in the country,” he said, adding, “There is no question at all that we are facing security challenges, but we are able to overcome them. The role of the leadership is to sit down to think through the problems”

The vice-president’s persistent call was validated by an editorial published by The SUN Newspapers of Tuesday, March 16, 2021 titled, ‘Osinbajo’s renewed call for state police’.

It partly read, “In order to curb the worsening insecurity across the country, the Vice President, Professor Yemi Osinbajo, recently restated the case for the creation of state police. The Vice President, who made the call at a recent international conference on Patriotism, Security, Governance and National Development, argued that a decentralised police force will help to check the current security challenges in the country.

“According to Osinbajo, “we must accept that there is a need for greater decentralisation of the police force. I have been a frequent advocate of state policing and I believe this certainly must be the way we must go.”

“It is also not the first time the Federal Government would be mooting the idea of having another level of policing to complement the Nigeria Police Force. The ruling All Progressives Congress had the creation of state police as one of its agenda during the 2015 campaign. Unfortunately, the government has prevaricated between the creation of state police and community policing. We believe that this is the time the government should take a firm stand on the issue.

“Whichever way it is looked at, the current reality has proven that the current system of policing in the country is not working. That is probably why insecurity is on the rise. It can also explain why terrorists, bandits, killer herdsmen and kidnappers have not been effectively caged. There is no way the present centralised policing can guarantee effective security in the country, especially when the number of policemen is a far cry from the required personnel.

“Without doubt, the present central police arrangement is enormously encumbered by inadequate personnel and equipment. With less than 400,000 personnel, there is no way the Nigerian police can ensure adequate security throughout the country with 36 states and 774 local government areas. The poor numerical strength of the force is responsible for the ineffective policing of the country. That is why it is difficult to protect many communities across the country. The heinous activities of the rampaging bandits in some parts of the North can be traced to inadequate policing and the proliferation of unprotected spaces.

“State police arrangement is at the heart of the clamour for restructuring of the country. It is consistent with the principle of true federalism and the devolution of powers. State policing will ensure that governors effectively maintain law and order in their domains. It will help to tackle the mounting security challenges in the country. Although there are fears that some governors may abuse the state police, there must also be measures to check such excesses. The advantages of state police are more than the disadvantages. Notwithstanding the perceived shortcomings, the time for state police has come.

“Therefore, we urge the government to heed Osinbajo’s call and put measures in place to create state police.  We call on the National Assembly to enact relevant legislation that will ensure the creation of state police.”

Insecurity: It is time to open the calabash

Is it time for the VP to leave Buhari?

Ondo State: The Quest for Crafting an Investment Epicenter

Tales About VP On Social Media Regarding IPOB, Fulani Herders-Farmers Debunked By…