What is your take on Benue State governor’s call that land borders should be closed against foreign herdsmen? 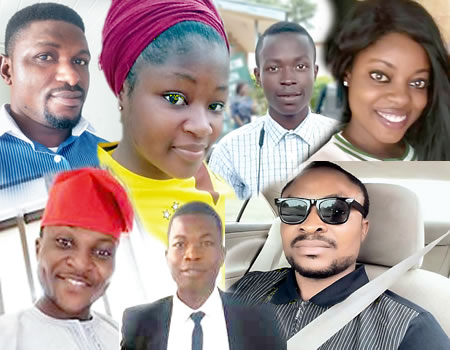 For some months now, the federal government has closed land borders to promote locally-made products. Though the closure has some merits and demerits associated with it, it is causing some heat in the polity. Recently, however, the Benue State governor, Samuel Ortom, said land borders should also be closed against foreign herdsmen. OLASUNKANMI OSO sampled the opinions of Nigerians as regards Ortom’s statement. Their views:

Prince Ubochi
Insecurity has eroded the peace of Nigerians. This does not go without pointing out the obvious incessant attacks from herdsmen in various communities in Nigeria. I would say that if we must face the real enemy, we must ‘uncover the hood’. The problems we face must be known: as to whether or not we are the ones who kill ourselves or other citizens cross the shores of our country to kill us. Our land borders should be closed for a reasonable period of time, and checks should be placed to ensure that this move is actualised. I strongly support the implementation of Benue State governor’s statement. This is because, for us to cleanse our land, we must be sure to safeguard our citizens from outside attacks.

Michael Oko
Our land borders should be closed completely against foreign herdsmen. We should start running policies that encourage local production and also help our security architecture. Many international countries do not open their borders like we do to foreigners or to importation. For instance, countries like South Africa, Namibia, Botswana, etc, do not operate free-border passage like we do. I know ECOWAS practice freedom of movement of goods and services, which SADC does also, but they do not operate porous border. Let us also operate the same system. If we start practising that system, our economy, security and livelihood would naturally improve. I am in support of the call to close our land borders to foreign herdsmen.

Rilwan Balogun
This statement has an undertone of tribal and political party rift. However, I think it is the duty of every responsive and responsible government to make its borders impregnable. Allowing herdsmen or whosoever to ply their trades or reside in Nigeria without the necessary documents contravenes the provisions of the Immigration Act, CAP I1, LFN 2004. Considering the havoc wrecked allegedly by these herdsmen, I do not think it should be a debatable subject as regards whether to protect and make our land borders impregnable or leave it precariously porous to external dangers. If closure of land borders was viewed as a panacea to tackling smuggling and other related vices, then I see no reason why our land borders should not be shut against foreign herdsmen.

Taopheequat Aiyepola
They should be controlled. And the only way to achieve this is through the complete manning of the borders and gateways. And also, it seems as if somebody or some people somewhere are sponsoring the supposed foreign herdsmen. The instruments they use are too sophisticated for a common herdsman, if I may use that word.

Taiwo Fadekemisola
If closing the border against ‘foreign herdsmen’ will bring peace and security to this country, I think it is a good idea. But it should be done in such a way that the ones in Nigeria are also monitored and cautioned, disciplined and educated that killing humans for cows is uncalled for.

Joseph
Herdsmen have been a source of panic many communities and states in Nigeria. Some states have, in many cases, taken precautionary measures by preventing them from entering their communities and even gave special security teams order to fight back when attacked. Usually, these foreign herdsmen do not know the cultures and rules of many of the communities they enter. So, they cause havoc. I believe it is a measure of defence and protection from possible calamity. So, I believe Benue State governor is correct by saying wthat land boarders should be closed against foreign herdsmen.

Newton Michael
What do you expect of Benue State governor, especially when the insecurity situation of that state is not improving? I am in total support of the state government’s decision on closing its borders, because it has a way of boosting local security and improving the ease-of-doing business in the state. The economic implication of the insecurity in that state has a ripple effect on the food security of that state in particular and the nation in general.

Lucky Ajige
Land border closure is a welcome idea because it would make us to be proactive in this country and also to start producing locally most of the things we need. But the closure of the border should be total—that is, all borders, with no exception, must be shut. The country must begin to think of measures to make available the things we mostly import. Foreign herdsmen transport cattle. If we are closing borders, why should they be left out? Foreign herdsmen encourage foreign importation of cattle. As such they too should be affected by border closure. I support the border closure for foreign herdsmen. What is sauce for the goose, is sauce for the gander.

What is pylori antigen?

My husband abandoned me after his mother insisted we must be divorced, woman tells court