What I would love to achieve with my tenure — SSANIP president 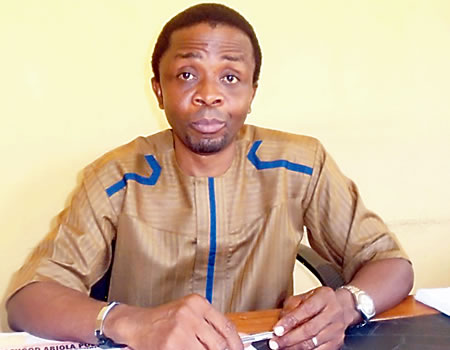 Phillip Adebanjo Ogunsipe is the new national president of the Senior Staff Association of Nigerian Polytechnics(SSANIP). He proffers, in this interview by LAOLU HAROLDS, what he believes are solutions to some of the problems in the education sector, as well as what he hopes to achieve during his tenure.

There used to be this rivalry between SSANIP and the Academic Staff Union of Polytechnics mainly over issues relating to remuneration, entitlement to allowances and other benefits in the polytechnic system. Has this changed?

It has not changed. ‘Rivalry’, I think, is good, provided it’s healthy. When we have limited resources provided by government and the various institutions, each of us will agitate for his constituency/members. Definitely, there will be conflicts. Recently we were having meetings; renegotiation of agreement – the 2009/2010 agreement. The government team is having meeting with each union, separately. When what we are presenting and what government is ready to part with now becomes a point of disagreement with ASUP, then you begin to wonder. What do I mean? For the non-teaching staff, we believe that a table within our own cadre, the topmost level, is vacant. That is where the registrar and bursar used to be placed before they were consolidated. That is the peak. They (ASUP) have their own equivalent; that is where their chief lecturers are. And we came up with the argument that within the public service, if you are coming in with first degree, you have opportunity of rising to Grade Level 17. Deputy registrars should be moved up to occupy that space. Already we have it in colleges of education and universities. And the representatives of National Wages and Salary Commission reasoned along with us that it has no financial implication because it’s already an existing cadre. With that argument, they said we could be moved up. ASUP now at their own meeting said if the deputy registrar and deputy bursar were moved up to 15, they would go on strike. How does that affect them? You’re not my employer; you’re free to negotiate your terms with your employer. If we continue to have issues like that, definitely there is no way we will have good working relationship. But I am looking forward to a more robust relationship with the academic staff, because we have so many things to gain if we work together.

ASUP has been at loggerheads with the Federal Government over the issue of implementation of the NEEDS Assessment reports. It appears SSANIP is somewhat quiet.

We’re not silent. We’ve been engaging government. We’ve been agitating to go on strike for non-implementation of NEEDS visitation assessment report. On that, we’ve been on the same page with ASUP. The report had been submitted long ago. We’ve not even seen the report. There is no white paper, talk less of cash backing. We are not silent, but when you have a government that will sign agreement with you and will not honour the agreement, how best do you approach the situation? It’s not by threatening or going on strike; we are using other methods to get government to listen.

As a strong stakeholder in the polytechnic sector, what do you consider the main problems besetting polytechnic education in Nigeria today?

Then there is the problem of discrimination against polytechnic graduates. Everybody loves to be celebrated. Those of us coming from the university background, when we were outside, the impression we had then was that they did little or nothing within the polytechnic system. They do theory and most of the time, they do practical. When you engage them in the industries, we’ve seen polytechnic graduates performing brilliantly well. If you are now restricting their movement because of HND (higher national diploma), then we are not even being faithful to the resources that have been committed to their training.

Of course there is also the problem of bad management within the system. You have chief executives or management that have this ‘this is my time; what am I going home with?’ mentality. I’m talking about corruption within the system. I think the searchlight should be beamed more on our Ivory Towers – especially polytechnics and universities.

Let’s talk about your term as the national president of SSANIP. When you look back after your tenure, what would you love to have achieved?

These all sound like mere wishes. Government has always been and will always be government. What do you plan to do differently to achieve these propositions?

I think it’s getting better. A while ago we had this Polytechnic Act signed into law; and if it’s now a common thing to see unions being represented in our councils in all polytechnics, definitely some things in the system will begin to work better. It might not be an immediate thing, but as unions, like it obtains in some other places, if we have one, two or three members within the National Assembly where we have education committee that we take our issues to; if we have direct representation, at least at the level of government, it would be easier for us to get some things done.

You want to sponsor people to go into politics?

Not into politics; but you can’t take politics out of individuals. What is the essence of a trade union that is at liberty by the constitution of this country to float a Labour party… we have a Labour party and we don’t have representation. We’ve been working to see our members or ex-members at such levels, so that some of those things we’ve been clamouring for we’ll have a voice where it matters.

As a stakeholder, what other problem bothers you generally about this sector?

Yes. Situations where state governments just wake up and set up institutions. Ogun State is a reference point. We have six polytechnics in Ogun State; the whole of the Southwest has five federal polytechnics. Something is quite obvious: those federal polytechnics would be better funded and better run than what we have here. Oyo State has about four polytechnics. In a situation where you have a state government like Ogun State having six polytechnics, one college of education, two universities (in all, we have 11 tertiary institutions in Ogun State); as desirable as those things are, are they well funded? It’s not just setting up institutions. Lagos State has one state university, one state polytechnic, and I think the third one is coming up (University of Medical Sciences), and the IGR in Lagos State is well above 33 billion naira on monthly basis. I don’t have the exact figure in Ogun, but I know it’s usually between N7 and N9 billion naira. You are having 11 tertiary institutions with that IGR, and what comes in from FAC on monthly basis is lower than what Lagos takes. How can you take care of those institutions well? We are appealing to some state governments that have penchant for setting up institutions without commensurate commitment, it’s not the best for education development in Nigeria.